My twins just turned two years old, and although I love them with every fiber of my being, I am now living a completely new reality :: I am officially in the throes of a love-hate relationship with toddlerhood. Here are just few reasons why…

{And I know you secretly hate it, too.}

Now before y’all get verklempt,  I am WELL AWARE of the recently issued warning that multiple cereals have been found to have weed killer in them. I checked the list and checked it twice and chose a Cheerio knock-off that is hopefully weed killer-free. Hopefully…

Anyway, the twins have milk and some version of O’s every morning. However, it has become apparent to me that O’s have multiple toddler-associated purposes other than nourishment. I have found O’s in my bra, purse, work bag and shoes. I have been force-fed O’s that are snot-soaked and spit out. I have dodged O’s that have been hurled at my head, nearly missing losing an eye on a few occasions.

But what is worse is that I have found O’s I know have been “hiding” for a significant period of time and they look EXACTLY the same as that day they went missing, which makes me question whether having a little weed killer in them is the worst that could happen. {Things that make you go hmmmmm…}

The twins love them. I think they are a mockin’ me and resent them with every fiber of my being. Every time I sneak a few into the garbage, 5 more appear. The multiply like gremlins. Only it’s not water that makes them multiply, it’s dirty toddler hands. 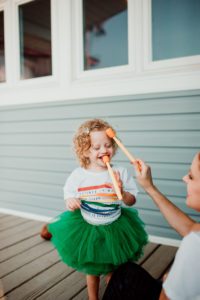 Whenever the twins get a block set, building set, Mr. Potato Head tub set, tool set, shape sorter set, a set of ANYTHING, I have to know how many pieces are in each set and make sure the set stays complete. If a piece goes missing, I will look everywhere until I find it. At this moment, there is a piece of a Brio stacking clown that has been missing for over a year, and I think about it regularly.

Every night, I tell the twins to pick something to play with and hold my breath hoping they pick something with just a few pieces or better yet something that IS NOT a set!! Somewhere deep inside I think my twins know this about me and conspire to hide things or deliberately empty a set of blocks on the floor with no intention of playing with them and instead walk away snickering and pointing at me…

{As I type this, I am realizing that I may have a little problem, and I MAY know where that missing piece of the Brio stacking clown is.}

I never knew such a tiny human being could be triggered by the most slight and random events. Here are just a few examples of what has caused a complete and total collapse in human civilization under my own roof:

*Cheerios {Another reason why I HATE them!}

*I wouldn’t let her eat Vaseline

After nearly a year of experience with the “Dr. Jekyl and Miss Hyde”-nature of toddler-life, I still cannot predict what will set them off. I find myself saying or suggesting something then immediately taking a step back, duck and dodging, squinting my eyes, or protecting my mid-section. I have been hit, slapped, head-butted, pinched, bit, and kicked. I feel like I have gone round after round in the toddler UFC octagon, and I am always the one tapping out.

But sometimes they surprise me and put their cups in the sink or garbage in the trash can. They give me a kiss and let me comb their hair. They eat their croissant at Red Dessert Dive instead of grinding it into the floor in a fit of rage. They get in their car seats without incident.

I am so confused…

{Maybe I should have paid more attention on my peds and psych rotations as a medical student.}

As a high-risk obstetrician and surgeon, I have encountered just about every bodily fluid that can be emitted from a human being, but I just can’t with this one.

I promised myself that I would teach my twins to love all animals, including ALL bugs. I don’t want them to be scared, and I want them to learn that every creature, great or small, is a life that has meaning.

{OMG, I can’t even type this with a straight face.}

Anyway, we look for bugs in the yard almost every day. We find lizards, frogs, ladybugs, spiders, and various other creepy crawlies. They love it and I tolerate it.  After all, we all do things we would really rather NOT do for the sake of our kiddos, right??

No life’s lesson is worth nearly breaking my ankle as I jumped up and took off running. I left my babies alone to fend for themselves with a creature that could eat their little faces off!

Oh well. They are just gonna have to find out about bugs like a lot of kids do…Animal Planet.

There is nothing like being spurned by the very beings who came out of my own body when I ask for a simple kiss, hug, or to just let me hold them. I walk around daily with a capital “L” on my forehead. It may not be visible to the naked eye, but I feel it in my soul.

{This is what it must feel like to yearn for that rose, but instead get sent home on night one or be runner-up.}

I am an accomplished, self-made professional woman who spent 42 years doing what I want when I wanted and making no excuses. I am tough, straight-forward, and outspoken. I have traveled the world to experience different cultures; oftentimes to places most people would not consider going. I love listening to rap music, YSL stilettos, going to the newest, coolest hotspot, and having gatherings at my house.

Now I rush home as soon as I can to see their precious faces. My voice reaches a whole new octave when they do something new or funny. I haven’t traveled in almost three years waiting instead until they are big enough for our first world adventure together. I listen to Super Simple Songs and play hide-and-seek. My ankles are too weak now to handle stilettos so my YSLs are gathering dust in my closet. I spend my weekends going to cool parks and playgrounds. I host playdates at my house.

Being a mom of toddlers can be trying, but it has changed me in so many ways. Yes, my sharp edges may now be a little more rounded, but I am the happiest I have ever been.

“I Know What You Guys Do Secretly After We Go to Bed.”

The Advantages of Living Close To Grandparents