The movie Frozen.  Wow.  Where do I even begin?  With school out these past two weeks and rain in the forecast pretty much every, loving day – I think my family and I watched it about 8164151 times.  My daughter is only 20 months old, but you better believe she can already say, “Let It Go, pleeease!”  And my son who is all-boy-all-the-time asks me if I want to build a snowman about a hundred and one times a day.  And my husband?  Well…I may or may not have caught him singing “For the first time in forever…” as he was working in the yard this weekend.  True story.

What is it about the movie Frozen that has taken the world by storm?  Sure, it’s got some catchy tunes.  And yeah, the characters are awfully intriguing.  But am I the only one who has a few qualms with this worldwide phenomenon??? 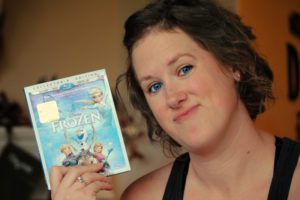 Let’s start with the opening sequence…the chanting.  What is that and where does it come from?  It plays no valid role in the movie, other than to signal every child within earshot to come running at full speed to the television and to firmly plant themselves about 6 inches from the screen for the entire 102 minutes that are about to unfold.  I swear if you played it backwards it would be some crazy encrypted message brainwashing all the children and forcing all the parents to spend their entire life savings on licensed products like an Elsa dress that lights up AND plays music.  {Have you seen it yet?  It’s sooo cute!}  And then from there it randomly goes into a bunch of burly men harvesting ice?  Do people really do that??  I mean – I usually just grab mine from the ice maker.  Or the local gas station if I’m hosting a party or packing a cooler.  {Cheers!}  But I digress.

From there, the movie goes to Anna and Elsa who end up playing “winter” in what seems to be the castle ballroom.  Ummm…where are their parents and why are they allowing this?  Or at the very least, shouldn’t the royal nanny be supervising??  {I’m pretty sure that would NOT fly with Prince George.}  Just like every mom in the world could have anticipated, someone ends up getting seriously injured causing the king and queen to rip themselves away from what I envision are some really delicious tea and crumpets and also leaving Anna with a permanent white streak in her gorgeous red locks.  {Which looks kind of cool in a punk-rocker-chic type way.  Right?}

So what now…  Nearest hospital?  Nope.  Royal doctor?  Nah.  Faraway secret village with a bunch of rocks that turn into trolls?  BINGO!  After all, isn’t that every mom’s first line of defense when their daughter suffers a serious head injury and is clinging to life?  As you could probably expect, Pabbie {the eldest and wisest of the trolls} works his Men in Black magic and erases Anna’s memory while giving a word of warning to the entire royal family.  Because that makes waaay more sense than just using his voodoo magic to rid Elsa of her freezing powers.  Can I get an amen?

Then, Elsa gets banned to her room for the rest of forever {or until Coronation Day – whatevs}.  So, yeah, how is that NOT child abuse?  I realize her room is probably the size of my entire house and she probably just rings a royal bell and gets whatever she wants…but I’m also pretty sure that locking your child in a room with zero contact with the outside word is ILLEGAL.  Wait, I forgot they are in Arendelle and probably make up their own laws.  Well, at the very least it is seriously and morally wrong.  For real.  I feel bad when I just send my kids to their room to play while I make dinner.

A few years pass…Elsa’s powers grow stronger…and then…  The parents die.  {Pleeease tell me that I am not the only one who sheds a tear every. single. time. they watch this part.}  And here is where I start having some MAJOR issues with the movie — Why in the world do these girls not have some kind of royal counsel to help them take hold of their lives?  I mean, I get that with intense freezing powers – or dare I say it, sorcery – Elsa probably needs to have some pretty firm boundaries in place.  But locking the doors to the castle and making poor Anna play with clocks and paintings?  Not cool, Royals.  Not cool at all.  That girl needs some developmentally appropriate toys and playmates stat.
Until…Coronation Day!  Of course, Elsa is super nervous since she hasn’t left the confines of her room in…oh…YEARS, and Anna is freaking the freak out because she finally gets to have some human interaction.  {Both of which to be expected.}  I’ll skim over the details, but Anna falls head over heels in love with the first man she sees, Elsa becomes queen, they eat and giggle and dance at the ball, and blah-blah-blah…  Until of course, someone has to go and screw it all up.  And that someone is Anna.

Out of nowhere, she decides to up and get engaged to Hans {aka the first man she sees}.  Now correct me if I’m wrong, but isn’t Anna like 17 or 18?  So WHY ON EARTH IS SHE TRYING TO GET MARRIED?!?!  I’m no feminist {okay, maybe a little}, but I do NOT want my sweet little spirited daughter thinking that she needs to put a ring on it before she even graduates high school.  No way.  No how.  Not my girl.  So you certainly can’t blame Elsa when she goes a little batsh*t crazy on Anna for even suggesting such a thing.

An argument starts up between the two sisters, icicles start flying, and next thing you know — Elsa runs off leaving the entire town in a permanent winter.  Awesome.  Except not really.  Thankfully, Anna takes some responsibility for the whole thing and volunteers to go after her.  Only problem?  She leaves the entire kingdom in control of her fiance-for-three-minutes Hans. 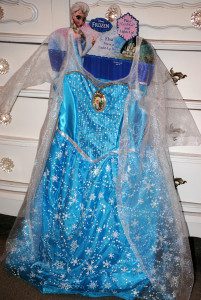 Meanwhile, Elsa is really letting it go and building a gorgeous ice palace and changing into a sexy little get up. Which has to make me laugh.  Because we ALL know that if she were a 30-something mom she would not have opted for a slinky dress…and instead probably gone with an oversized sweater, fleece lined leggings, and cozy fur boots.  After all, who do you have to impress when you’ve secluded yourself away for the rest of your life.  Nobody, that’s who.

All the while, Anna is slooowly trying to track her down.  Falling in an icy river {hypothermia, much?}, stopping at a trading post {yoo-hoo!}, and meeting a stranger and his trusty sidekick on the way.  Speaking of which, is it just me – or is Kristoff the only one with a brain in this whole movie?  He is wise beyond his years, incredibly articulate, and always has something to say.  {Even though most of the time he is talking to his reindeer – but that’s not important.}  Plus, he is mighty handsome for a cartoon character too.  Wait, what?!?  Did I just say that?  Be right back while I go look at some pictures of Chris Hemsworth or something.

With a little bribery and manipulation {a woman’s finest powers}, Anna gets Kristoff and his reindeer Sven to help her with the search for Elsa.  Together they fight a pack of wolves, lose their only mode of transportation, and meet a walking-and-talking snowman named Olaf who is flipping hilarious.  You know, what you’d expect during a typical search and rescue.

Bear with me as I once again skim over the details, but this is usually where my kids start in with outlandish requests like food or a potty break – ultimately distracting me from my intense movie watching and deep thinking.  Sheesh.  But from what I gather, the crew finally makes it to the ice palace, Elsa and Anna make amends, and then just as quickly – Elsa flips her ish and starts in with her sorcery yet again.  {I blame it on the lack of social skills, after all – what can you expect from someone who was locked in a room almost their entire life?}  This time though, she hits Anna in the heart with her serious freezing powers.  Duh-duh-duuuh.  Thankfully though, Kristoff is there to save Anna and rescue her from Elsa’s newest frozen creation – the Michelin Man’s creepy brother.  {What happened to sistas before mistas, Elsa?  Huh???} 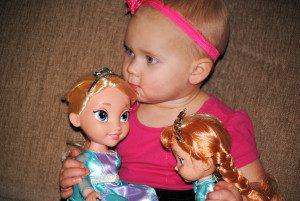 Once again, Anna is whisked off to the faraway secret village with a bunch of rocks that turn into trolls  {because that’s what you do when someone gets hurt in Arrendelle, remember?}, but this time instead of providing immediate medical treatment – the trolls decide to do a little song and dance number and come ridiculously close to marrying Anna and Kristoff right there on the spot.  You know come to think of it, the whole scene kind of reminds me of my last trip to Vegas.  But I digress once again.

From there, Pabbie gives some pretty solid advice, but in true teenager form – Anna pretty much blows it off and just wants to go running back to her fiance-for-now-thirty-minutes.  Little does she know, Hans and the jerks from Weasel Town are actually in the middle of an epic battle leaving Elsa knocked out cold.  {Pun intended.}

And here’s where the movie goes from cute and clever kid’s film to full on soap opera…  Elsa gets locked up in a dungeon, Anna tries to make out with Hans, and then Hans reveals himself as not only a total and complete loser — but a murderer too.  {I could have seen that coming from a mile away, couldn’t you?}  Then, in a total turn of events, Olaf appears and becomes the hero of the entire film.  He lights a fire {the kid has no clue that heat can melt him}, declares to not leave her side until she is saved, and then helps her bust out of captivity.  Meanwhile, Elsa is using her sorcery to do the same and the two go off on yet another search and rescue mission.  Elsa for Anna … and Anna for Kristoff {after all, she is straight up BOY CRAZY!}.

Now, just in case you are one of the like two people in all of Western civilization who has yet to see the movie Frozen, I’m going to go ahead and end the detailed part of my little recap here.  {Hey, I gotta leave something a mystery and up for your own interpretation!}  But as one might imagine from a total and complete unrealistic cartoon, everyone lives happily ever after and blah and blah and blah…  The. End.

Now, please excuse me while I succumb to my children’s pleas to watch the movie Frozen for the 8164152nd time.  The popcorn is already popping away, and I’ve got my spot ready on the couch to join them.  Because if I’m being REALLY real — even I love this crazy movie too. 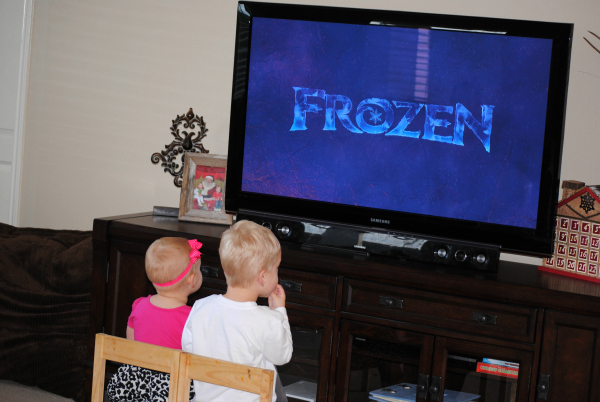