“One, two, three, four, five…and six,” I counted to myself as I pressed the wax candles into a chocolate, T-Rex themed birthday cake. I lit each one and carefully carried the flaming tribute to the Jurassic era into the dining room and set it in front of my newly six-year-old son.

While we sang, I made note of the gap at the bottom of his smile where he’d lost his first tooth, the way the candlelight flickered in his sandy eyes, and the drift of his hair across his forehead, desperately in need of a trim.

He was so excited to be six. Oddly enough, he is the second-to-last person in his class to turn six, and it has been a source of angst for him for several weeks now.

I, on the other hand, was forcing a smile and trying my best to focus on his happiness and enthusiasm.

After copious amounts of chocolate were consumed and the dishes were discarded in the sink, I finished the task of hanging the children’s uniforms in each closet in preparation for tomorrow’s day of school.

“Where are the rest of the hangers? We never seem to have enough hangers,” I muttered to myself as I shuffled through the clothes in Sawyer’s closet searching for one I might have missed.

That was when I hit the section of outgrown clothes with which I cannot seem to part. My pace slowed as my fingers closed around the patch of red seersucker on a Jon Jon smocked with tiny sailboats, then traveled down the row to a footed sleeper striped in primary colors with his name embroidered on the butt, and finally to the soft cotton of a nautical outfit, worn from many washings as it was one of my favorites on him.

I pulled out the outfit and stared.

I stared for a very long time.

I could see his little knobby knees, feet clad in light-up Captain America shoes sticking out the leg holes and the curve of his shoulder peeking out the sleeve.

I remember the last time he was able to wear it. I have a picture of that day, of him standing in the parking lot of his preschool holding a plant growing in a plastic cup, wearing a grin the size of Texas under a mop of blonde curls. 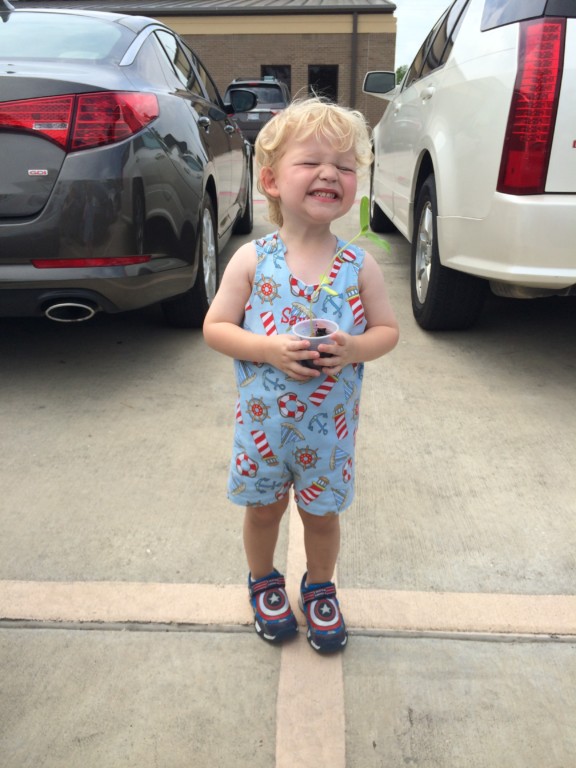 I miss that little boy. I lost him somewhere along the way, and I never really said goodbye.

Don’t misunderstand me.  I love everything about my sweet six-year-old. But I adored him at five too, and six is different from five and four and three.

And next year will be seven followed by eight.

Children age; I get it. It’s what they do; it’s what they are designed to do. I did it too. And he is God’s child, on loan to me, to raise him as best I can, and my role is that of a witness and observer to the miracle of his growing and changing, and I accept that. I marvel at the new things he learns each year, the skills he develops, and my heart swells with joy at the pride that is written all over his angelic face every step of the way.

But I know these days are limited in number, and we are getting closer and closer to a time when he will no longer greet me when I pick him up from school with a fervent hug that wraps itself around my legs and squeezes me until I stumble. And a day will come when we are walking down the hallway to his classroom and he drops my hand because he doesn’t need to hold it anymore.

I rejoice with him at each new step of independence, as I should, but there is that part of me that twists and breaks with each new milestone.

There’s a part of me that mourns the way he used to sit cradled in my lap watching Jake and the Neverland Pirates while holding my hand at three, and the way he refused to walk without the assistance of at least two of my fingers at one and a half.

While I celebrate six with him and all of the new wonders it will surely bring, there is a part of me that’s standing in his closet, thumbing through a stack of outgrown clothes and wishing for just one more day of five…and four…and three…and even two.