My son and his lovey.

His lovey…his very best friend. His person. It’s so special to him; it’s like another appendage. Our son latched on to this attachment item just before his first birthday. It’s an Angel Dear brand lovey that looks like a tiger, and we affectionately call it Tigee {and since it’s pretty much earned the status of a person in our house, I’ll use it as a proper noun}. Tigee is so loved that he’s just gotten his first hole, which I think is the mark of true love with any attachment item. 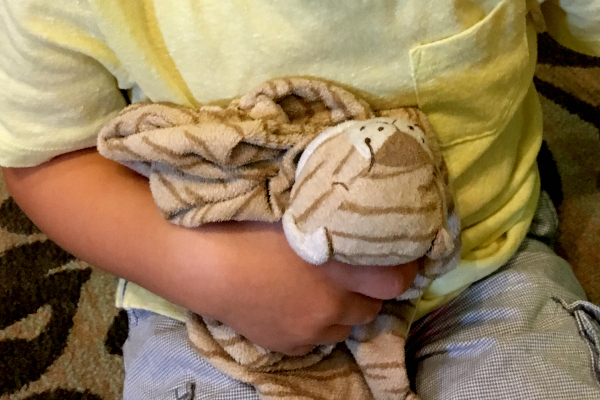 The fact is, most children will get attached to something when they are around a year old – a lovey, a pacifier, a crib blanket, a random stuffed animal, etc. It’s perfectly normal for kids to attach to something as they are beginning to explore and understand their world. Their attachment item is a safe place for them. I’m no therapist, but even I can understand that Tigee has a bigger meaning for our son than just a random lovey he decided to latch on to.

Tigee has had quite the adventure as part our family. He’s gone to LSU football games and an Astros game; he’s been at our table for beignets at Cafe du Monde in New Orleans, and he’s joined us at Sea World in San Antonio. He’s endured doctor visits, numerous episodes of Bubble Guppies, and just the everyday run of being a toddler’s very best friend.

In our family, we know that Tigee is more than just a toy … Tigee is what our son holds close to him if he’s in an uncomfortable situation, or if he just needs to pull himself together and settle down when he is upset. Tigee is his constant companion. Tigee is always in his left hand while he falls asleep, and is somewhere in his carseat when we are on the go. We have been known to turn around and get Tigee if we forget him at home, or pull over on the side of the road to make sure we have him. He is just that important to our son.

And I get it. I had a white blanket with a blue border when I was a little girl, and I was completely attached to it as well. I gave up carrying it around when I was in preschool, but I still have fond memories of the comfort it brought when I was scared. It stayed in my bedroom, tucked inside my cedar chest, until I went to college.

As our son has gotten older, it’s been helpful to gauge his level of comfort with a situation based on his attachment to Tigee. For instance… When I drop him off at school in the morning, there are days {and we all have them} where he is reluctant to settle in and start playing with his friends. In many social settings, our son is slow to warm up, so this isn’t unusual. But at some point in those first few minutes, he will turn to me and say, “Here, Mommy, we can put Tigee in my backpack now.” This is my cue that he is good to go for the day.

One of my favorite bloggers just wrote a post about her son’s attachment item, and she affectionately titled her post “Squad.” I totally get that. Tigee is part of our son’s squad. And as his mom, that’s a squad goal that I am all about!