Toddlers certainly struggle with separation anxiety, but what about moms? 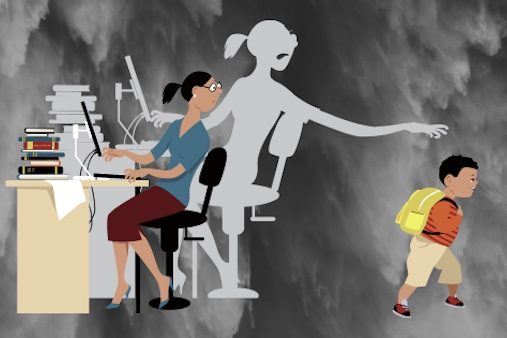 As a young first time soon-to-be mother, pregnancy was the best time of my life. Being one with my baby, I felt every kick, every punch, and every hiccup. I read all the recommended “what to expect” and parenting books and {if you recall my past post Mom Rules Were Made to be Broken} even gave myself a list of what were the “right” things to do.

Once on maternity leave and constantly with my newborn, I felt grateful that things were falling into place. Despite the month of off and on baby blues, my fourth trimester was everything I had hoped. Spending middle of the nights watching trashy reality shows, nursing in the dark with just my baby, are still my favorite times to recount. Naps together on the couch in the middle of the day, just us two, are my second favorite memories.

These phases came and went. Too soon, I was expected back into the office. The baby was a little over three months old and I had to leave him in the capable hands of strangers! The inevitable time of daycare had come and I had no choice. I felt that this was going to be the hardest time of my early motherhood journey. After a few weeks, the baby and I said our good-byes every morning and kissed every afternoon we reunited. Life was as it should be…or I thought…

The Toddlerhood Wave of Separation Anxiety

I will be the first to admit that I have always been ill-prepared and naive about motherhood. I tried to prepare so much regarding what to do {plus painting nursery walls and buying baby clothes} that I did not consider :: ANYTHING GOES! In my rainbow gumdrop mind, the baby would have started daycare so young that he would be used to this routine. I would deal with the crying {especially my own} and then we would all be a-okay. Silly me. I now know that separation anxiety does happen again in toddlerhood. What I also now know is that it happens to moms, again.

A lot has happened since his first day of daycare. Almost a full year has gone by, and instead of carrying him in his infant carseat through the door, he holds my hand to walk down the hall to his classroom. His cries are louder, his tantrums are more passionate, and his peripheral vision is much better. The days of distracting him with a jingly toy are over. I realized there were only two things I could do to help this daily ‘mama please don’t go!’ moment.

Round Two for Mom {Definitely Not the Last}

I read that separation anxiety goes through rounds so in a way, I was ready for my son to have a go at it once more. I missed the part where it happens again to me and this time, by the tenfold. I had reverted to my feelings of pregnancy. I felt as if we were one and being away from him was missing a part of me. When he went to sleep, I watched videos of our weekend together or looked at pictures from the morning. I had to take breaks during work because I missed him so much that I wanted to just reminisce. I realized that as much as I enjoyed being us, I also had to be me.

Reclaim your space:: It was true, we had become one without knowing it. His stuff had taken over our house, even our bedroom. The little owl he played with was in our bed so I cried. I missed him. I had to separate our space and clear out his stuff. Was it dramatic? Probably so, but I had to fight back hard. The separation anxiety was disrupting my work, my day, my being me. No more cute rocking horses with Mom’s Disney ears or plush unicorns- they were to stay beyond those doors! 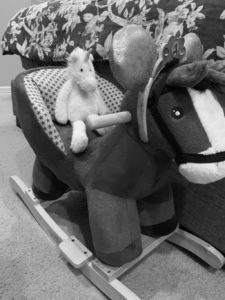 Stick to a bedtime routine:: Like how we train the baby to have a nighttime routine to calm their minds, I gave myself one to signal to my mind that it was time to turn off mom-mode. It goes without saying that moms are never truly out of mom-mode, but we can be less. I stuck to a vigorous skincare routine, night time tea, and a good episode of whatever the new hit show was. I was relaxed and I enjoyed my night being my night.

Enjoy time away:: So many nights I stayed up researching co-sleeping and if I should let him sleep with us. So many nights I stayed up wishing I could sleep in his crib with him. I had consumed myself with how much I love being in love with him that I forgot how much I enjoy so many other things. Fall back in love with hobbies you had. A fellow contributor, turned friend, recommended a fantasy novel series to me and I have been giving into the pleasure of a couple of hours before bed to immerse myself in book one.

From what more seasoned moms have told me, this is a fight that will ever end. All of us continue to miss our children to some degree, right? No one can really fault us. We grew these little seedlings into tiny teeth-wielding happy humans. The ancient Romans believed that soulmates were separated humans made of four arms, four legs,  and two faces. Maybe our children are our soulmates. At this moment, I have moved from separation anxiety to just plain clingy mom who enjoy nights without baby and appreciates daycare. My life will never be completely mine again, but at least I can have moments that are mine. 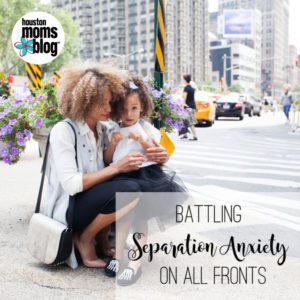