“Life is an adventure, and there is no script. I see something in ordinary moments. I believe that perfection comes not when you are dressed perfectly and wearing lipstick – but in little moments and interactions that make up our days and build and sustain our relationships. Let me show you the beauty in your unscripted moments…” – Karen Jacot, photographer

I’ve been following the Before 8am series on the blog since its debut, and I have loved getting a peek into everyone’s “normal.” We are all essentially doing the same thing – getting up and dressed and out the door – but the way each of us goes about our routine tells so much about our families. Years from now, when I think back on these days with my littles, these are the moments I hope to remember. I have thousands of pictures of my kids smiling sweetly for the camera while I’m acting a fool on the other side bribing them to smile. But I don’t have pictures of our everyday. What Karen captured for us here is priceless.

Without further adieu, welcome to our Saturday morning. Typically, we let the sound of the kids on their monitors wake us up. But since it’s not nearly as cute to photograph us getting out of bed, we were awake to greet Karen when she arrived. Our two-year old Connor woke up first, so Daddy went to get him. 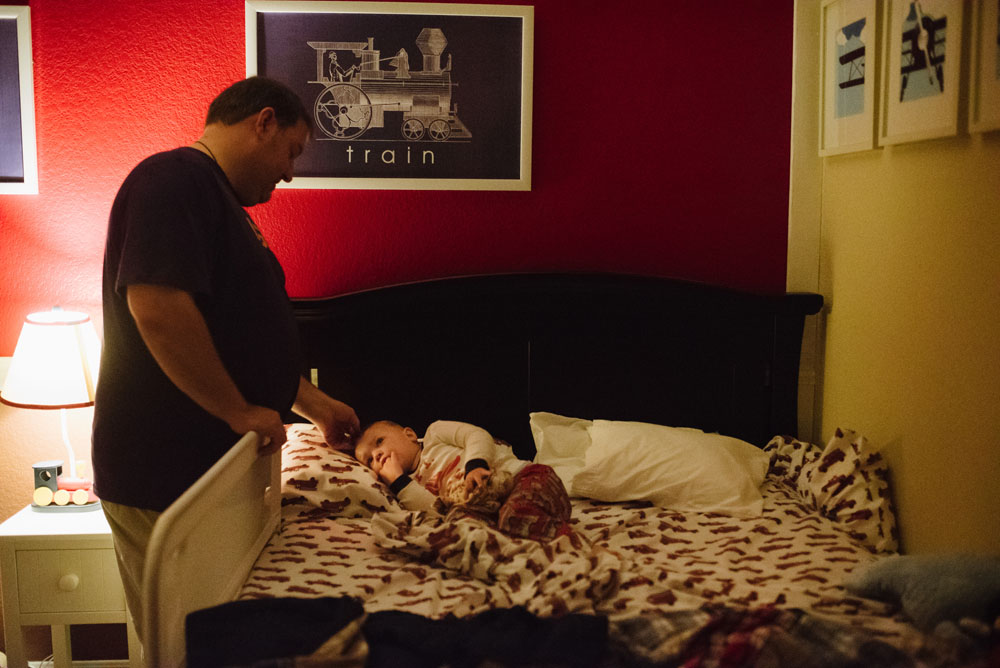 Connor has never used a pacifier. Instead, he sucks on his middle and ring fingers of his right hand and holds his tiger lovie {affectionately known as tigee} in his other hand. It’s so handy that he self soothes this way. You can lose a pacifier, but fingers are always there. 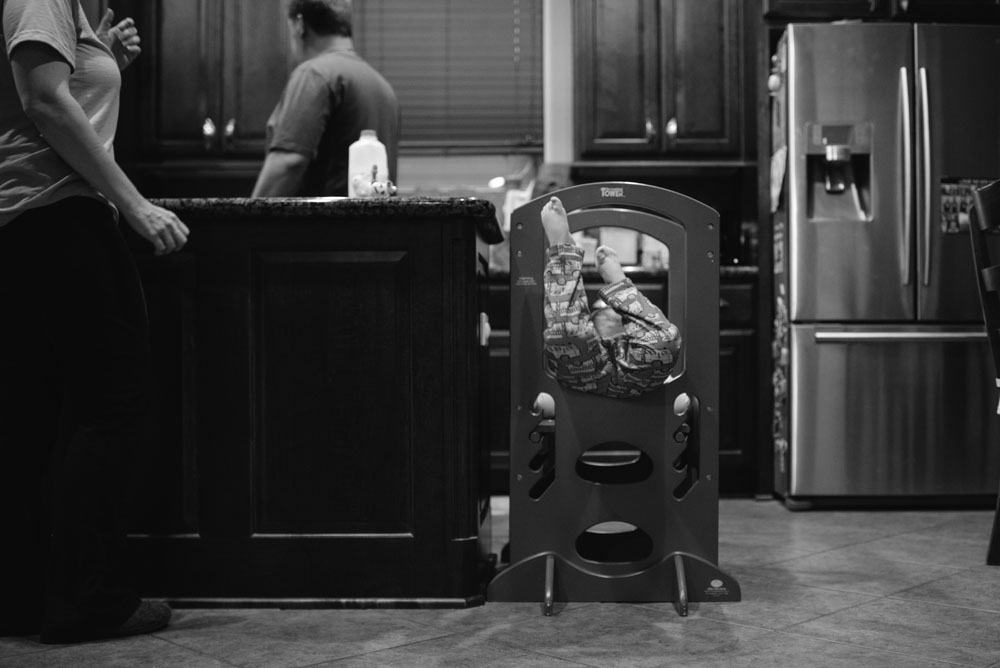 Every morning after he wakes up and we change his diaper, he comes into his baby brother’s room {where I can usually be found} and tells me, “Mornin’ Mommy, I go eat two muh-ins {muffins}.” Then he goes to the kitchen and climbs into his tower to eat his breakfast. We absolutely love the tower, and so does he! 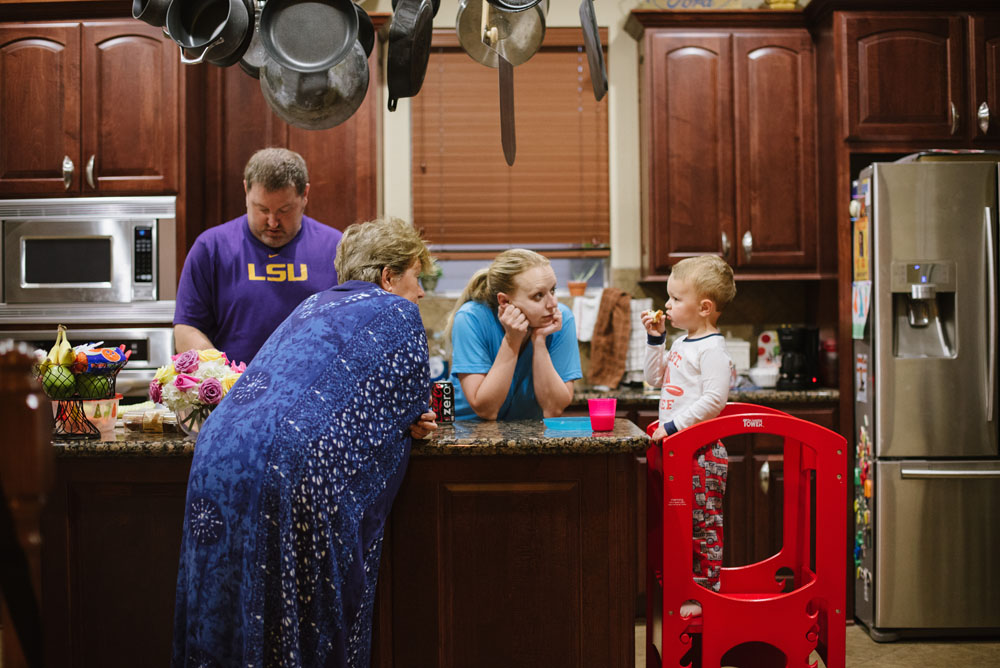 Here he is eating his squeeze applesauce {God bless who ever invented that!}, grazing his muffins, and drinking his milk while talking to Nana and me. My husbands’ parents were in town visiting from Baton Rouge on this particular weekend. We all love when Nana and Pops come to town! 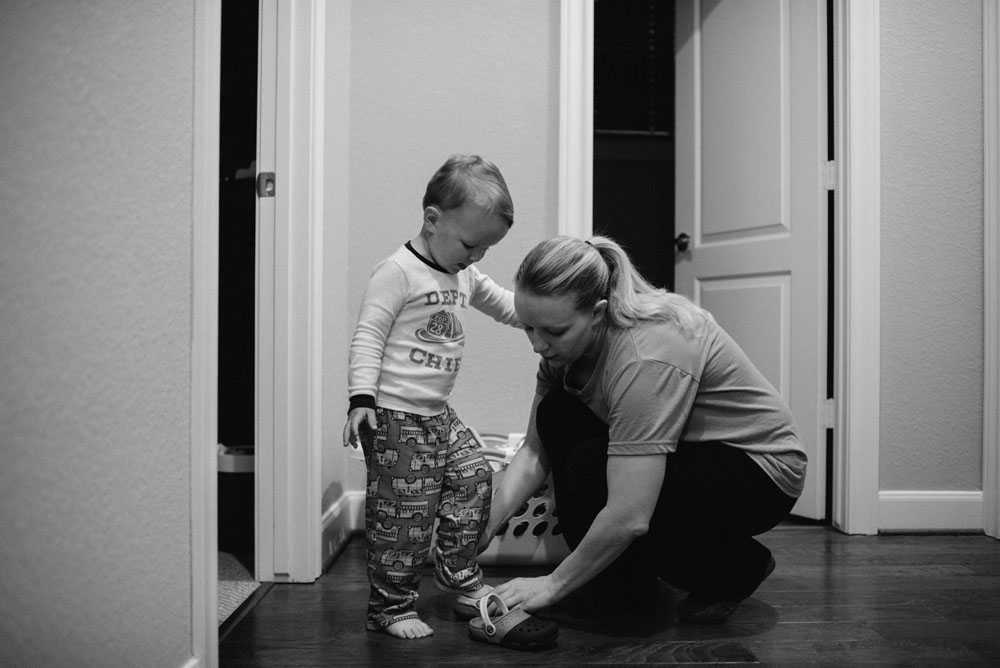 Little brother was still sleeping and Connor wanted to play outside, so we went and got his shoes on. Ever since baby Parker arrived five months ago, moments with just me and Connor are so few and far between, that I cherish the times I can give him all of my attention. This has definitely been the hardest part about the transition from one to two, but that’s a whole other blog post. 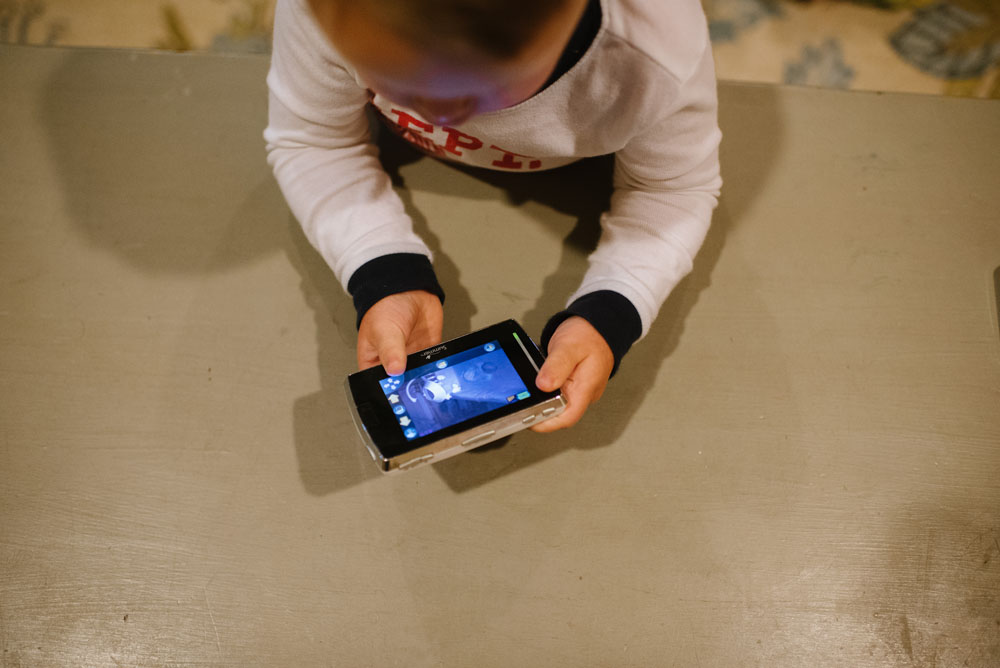 Before we went outside, Connor said, “I see baby” – so we checked in on the monitor to make sure he was still sleeping! 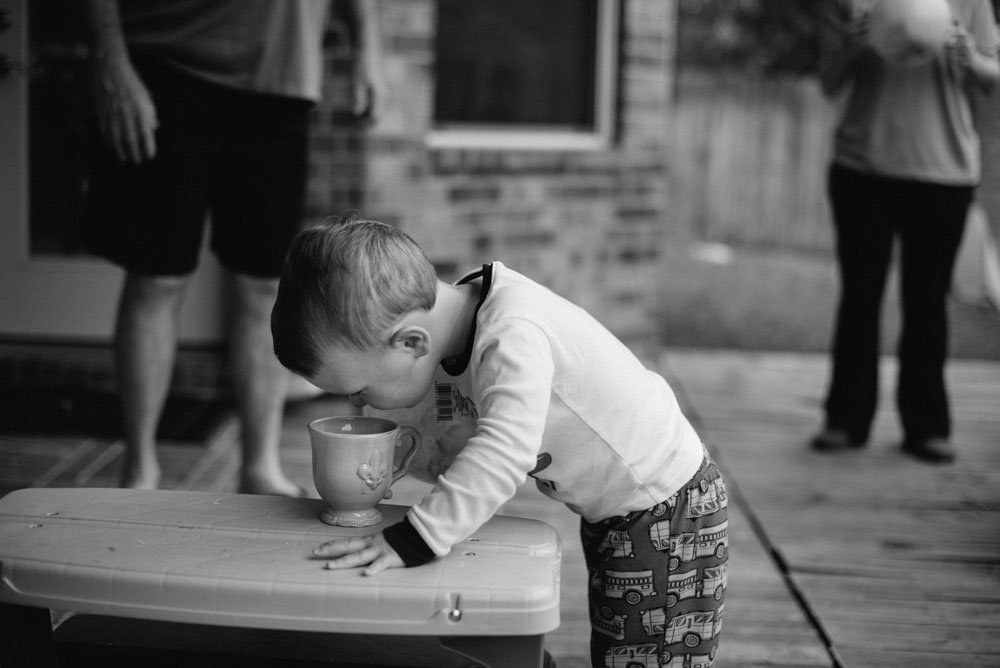 He insisted that Nana and Pops also come outside while Daddy cooked breakfast. He told Pops to put his coffee “right there” so they could play ball.  He’s a little bossy pants sometimes! And then he needed to sniff out the coffee for himself. He’s so curious about everything. 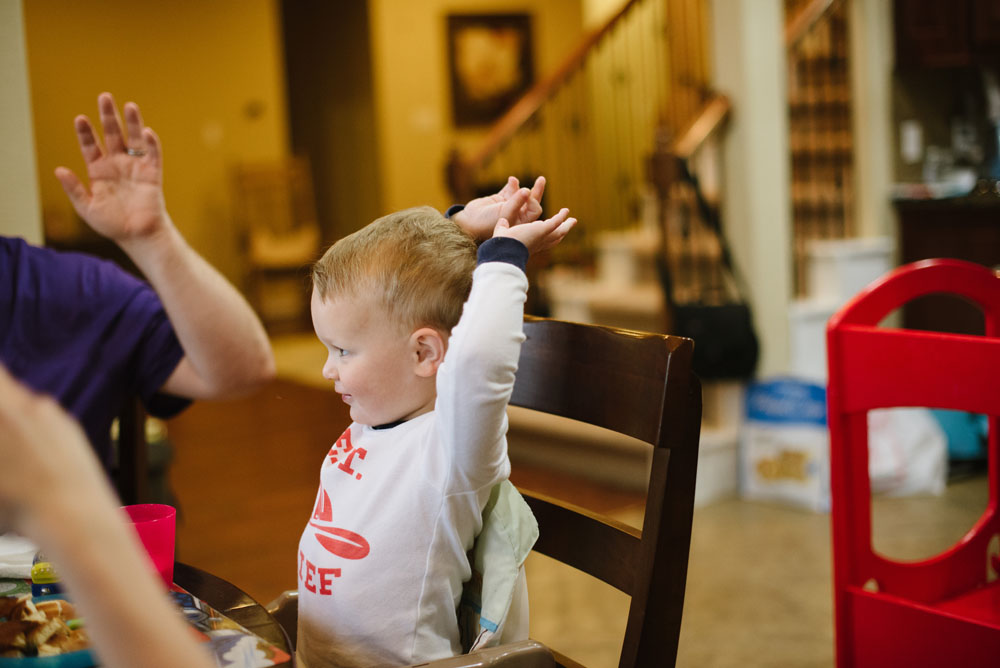 While Daddy made bacon and pancakes, Connor played hard with Nana and Pops outside, and he was ready for more breakfast. Connor makes sure we pray before every meal, and he won’t let us start praying until everyone’s hands are folded to “pay” {pray}. The we sing “Thank you Jesus for our food” and at the end, Connor raises his hands in the air and says the most enthusiastic “Amen!” you have ever heard. It’s my favorite. It’s seriously so cute. I’ve got to get it on video…you know, in case he becomes a preacher. 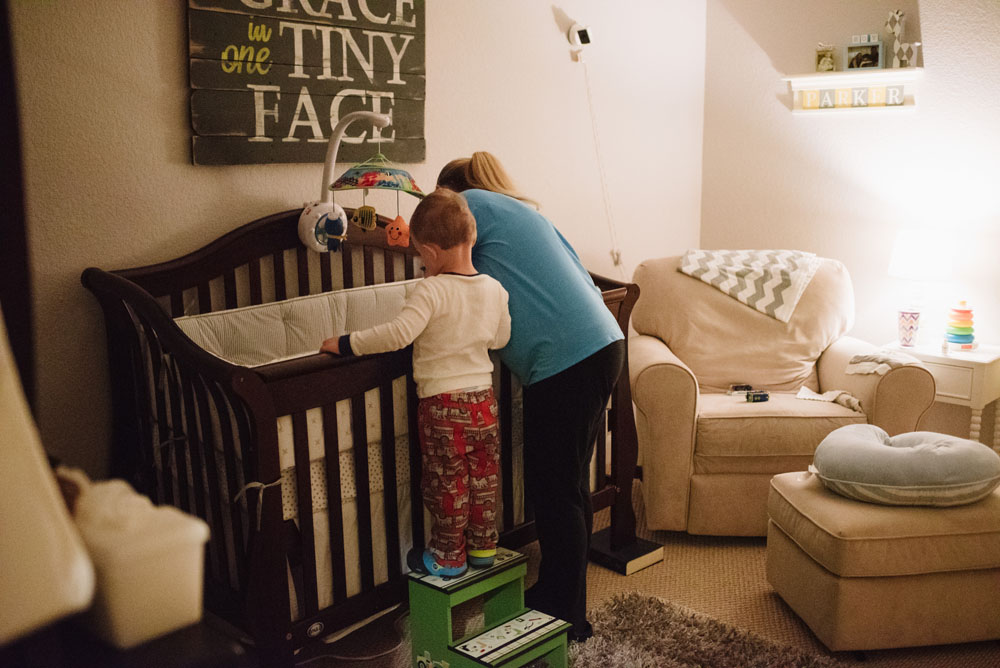 As soon as breakfast ended, baby brother Parker woke up. Parker is five months old and Connor is obsessed with “baby” {as he calls him 90% of the time}. He brought his stool to the crib and said, “I go up and see baby.” Toddler sentences are the cutest. 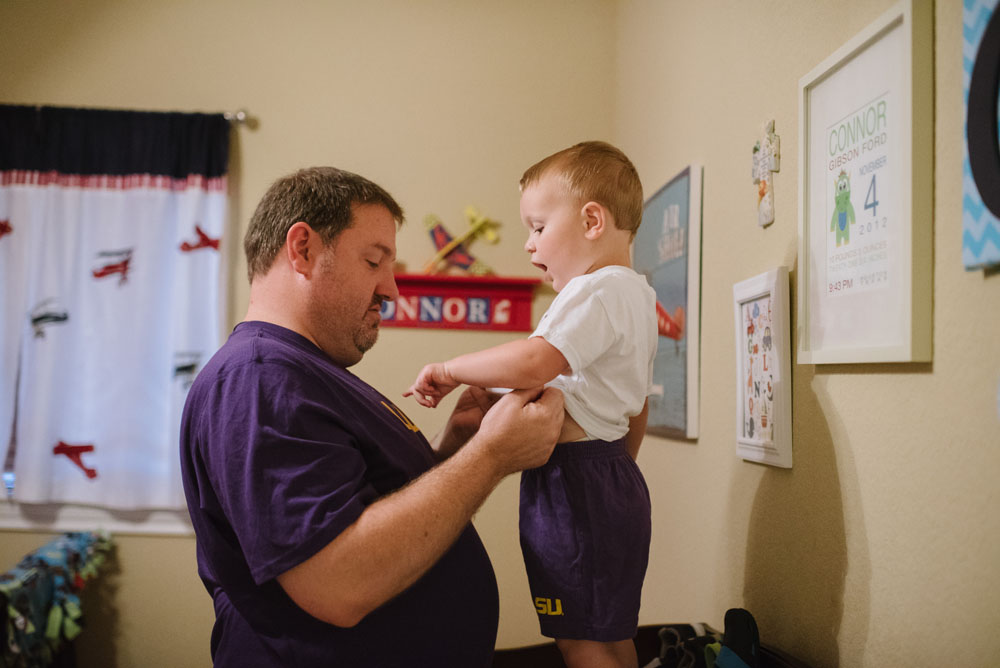 Daddy got Connor dressed for the day. He’s really into pronouncing his letters right now, and he’s especially good at L-S-U since Daddy wears those letters a lot! Brainwashing, much? 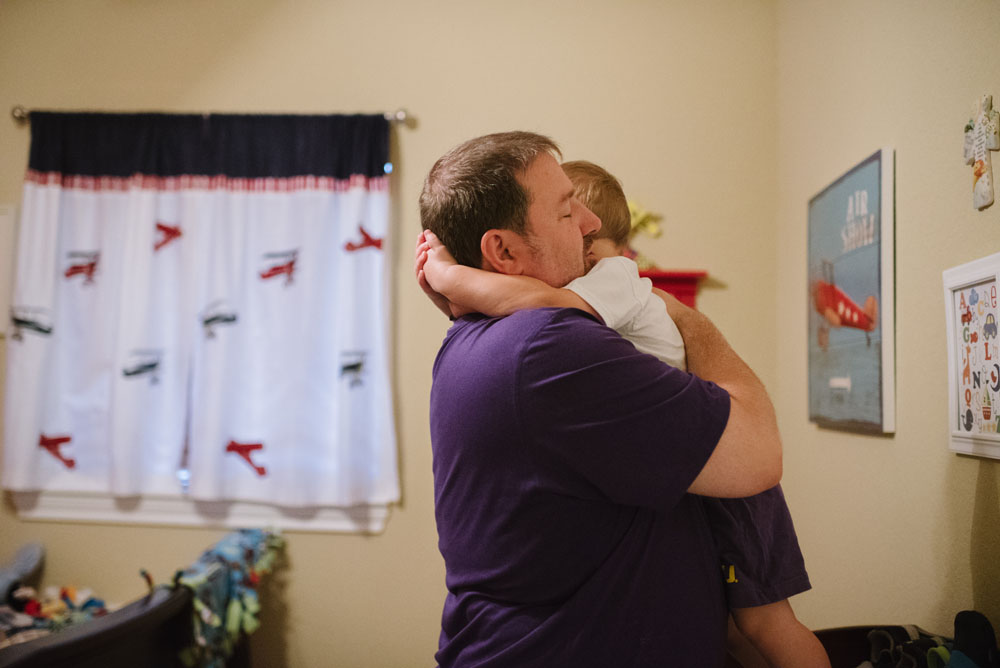 These two. They’ve gotten so close in the past few months. They have been spending lots of extra time together since baby brother came along. I love watching their bond grow. Connor adores his Daddy. And I do too! 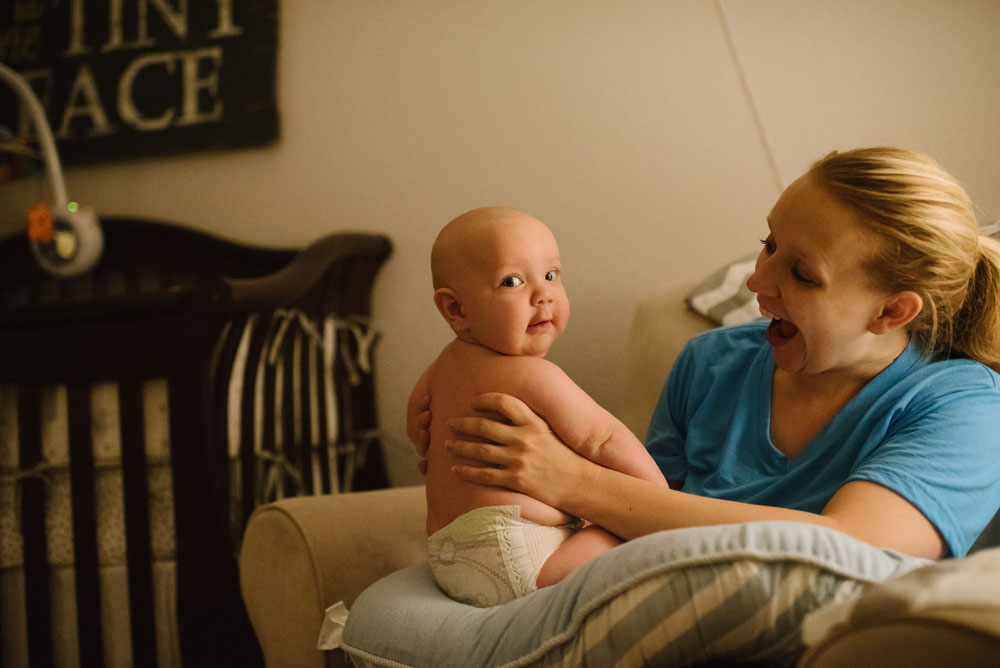 Oh, hi precious boy! Is there anything sweeter than a baby in a diaper? Be still my heart. 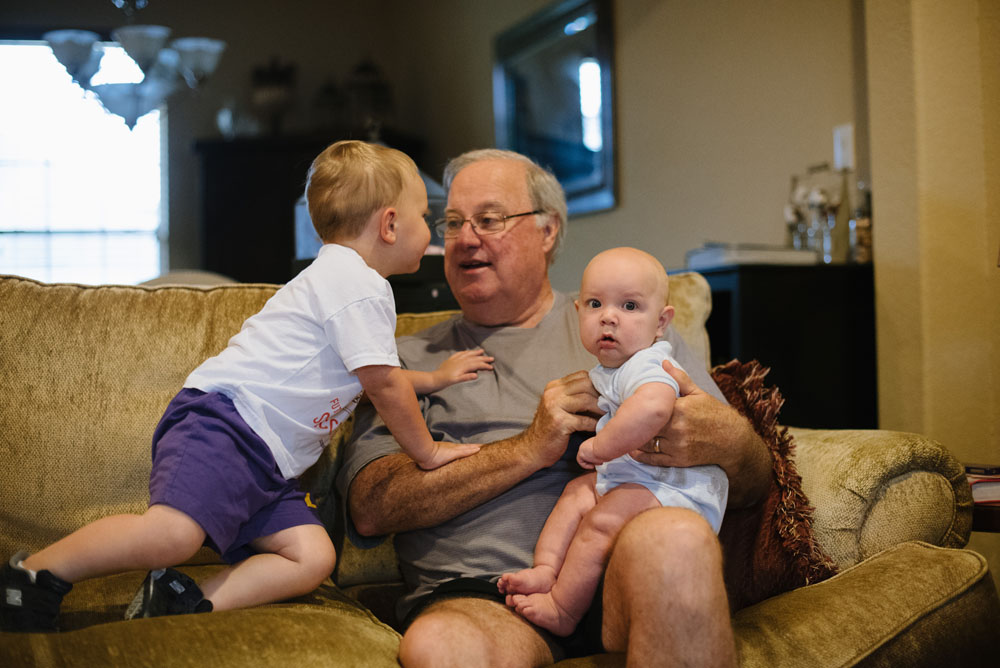 I love that Connor wants to be wherever Parker is…and in this case, it was in the lap of Pops for a kiss. Connor is absolutely smitten with his “Popf” and loves when he comes to visit! He wants to FaceTime him regularly {which he has learned to do by himself on my phone…so glad FaceTime is free!} 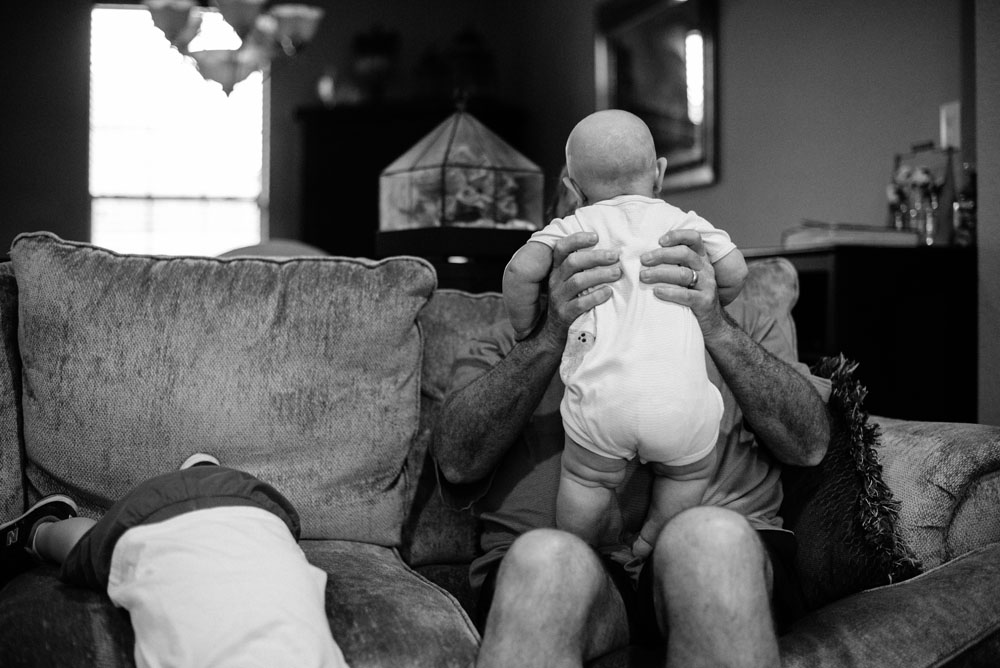 And now the moment is over, and he is diving off the couch and off to the next thing. Gotta love toddlers and their 30 second attention spans. 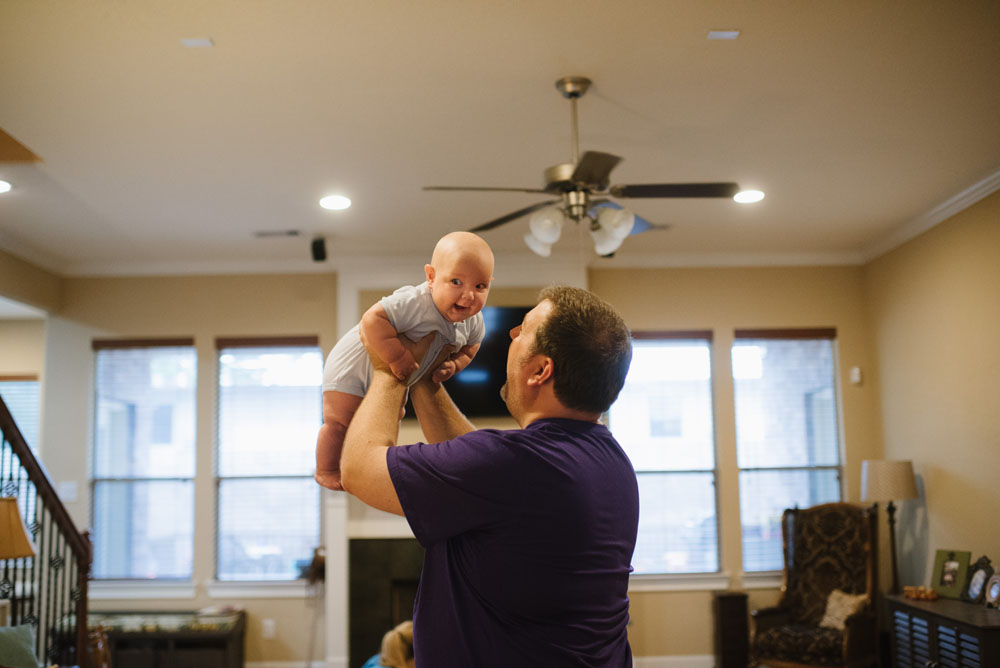 Daddy always lifts Parker up high and gets the biggest giggles from him – it’s absolutely adorable. My babies have the sweetest, most sincere laughs! I can’t get enough! 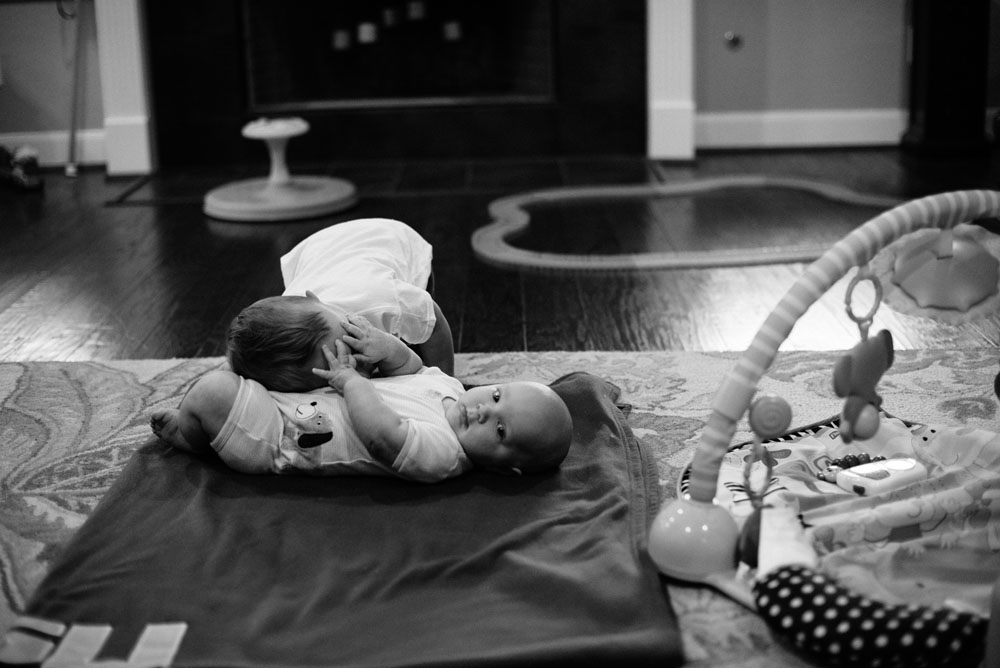 Connor wants to play with Parker so bad he can’t stand it. Right now, he loves to lay his head on the baby’s belly. Sometimes Parker will grab a fistful of Connor’s hair. Connor gets so tickled that he squeals and says, “Baby got my hair!!” 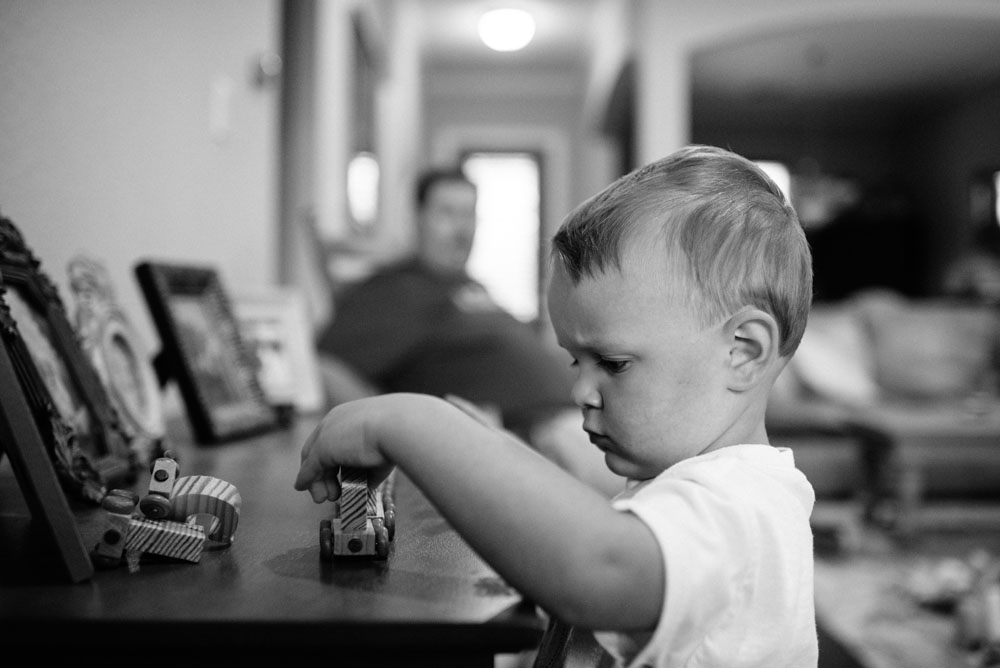 This boy is serious about his choo-choo’s. I love how focused he is in this picture. 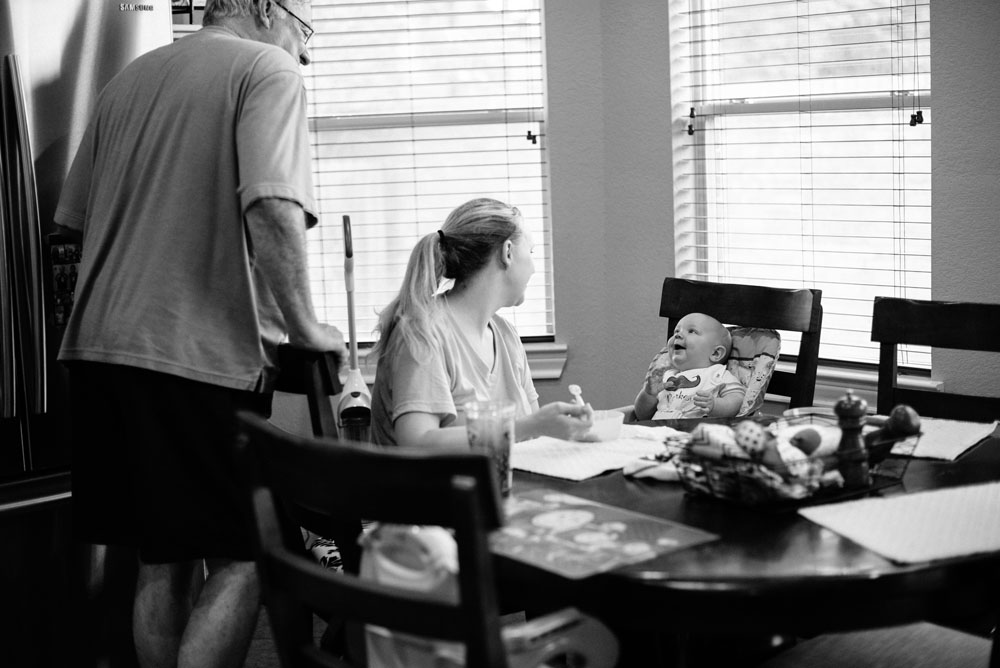 Parker has just started eating rice cereal, and he loves it. And he was all smiles for his Pops! 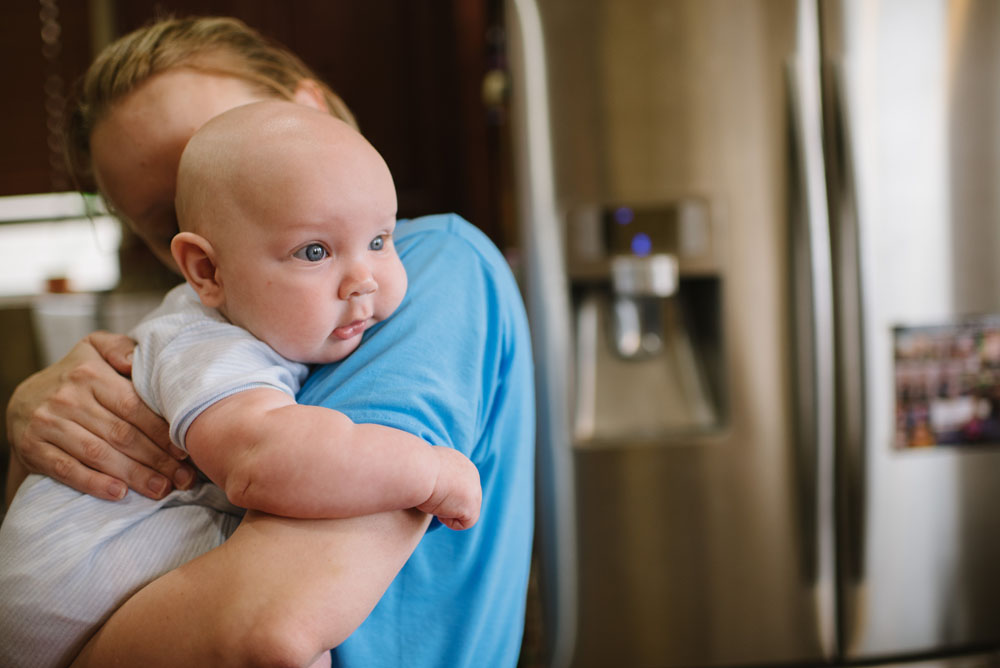 Parker wants to be held pretty much all the time. It’s his thing. So, I carry him around like he’s an accessory that is permanently attached to my body. Can you blame me? I mean, look at those blue eyes. And those cheeks. And those rolls! I have the most snuggly babies! 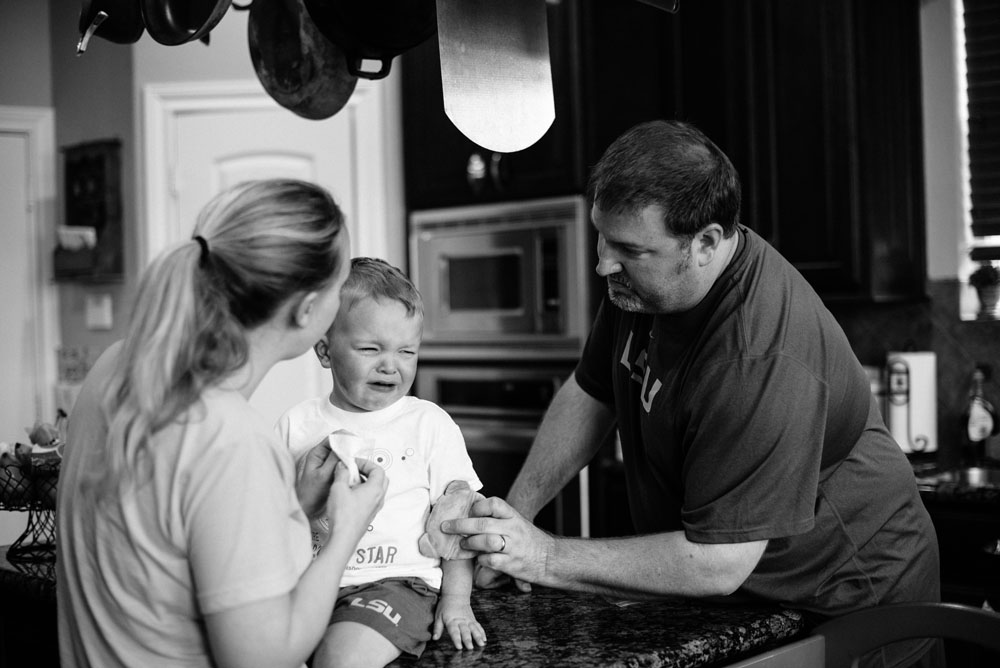 Houston, we have a crisis! Connor has a bo-bo from playing outside with his t-ball set. His arm is hurting and those are some real crocodile tears. We are trying to soothe him and tell him that his arm is going to be okay… 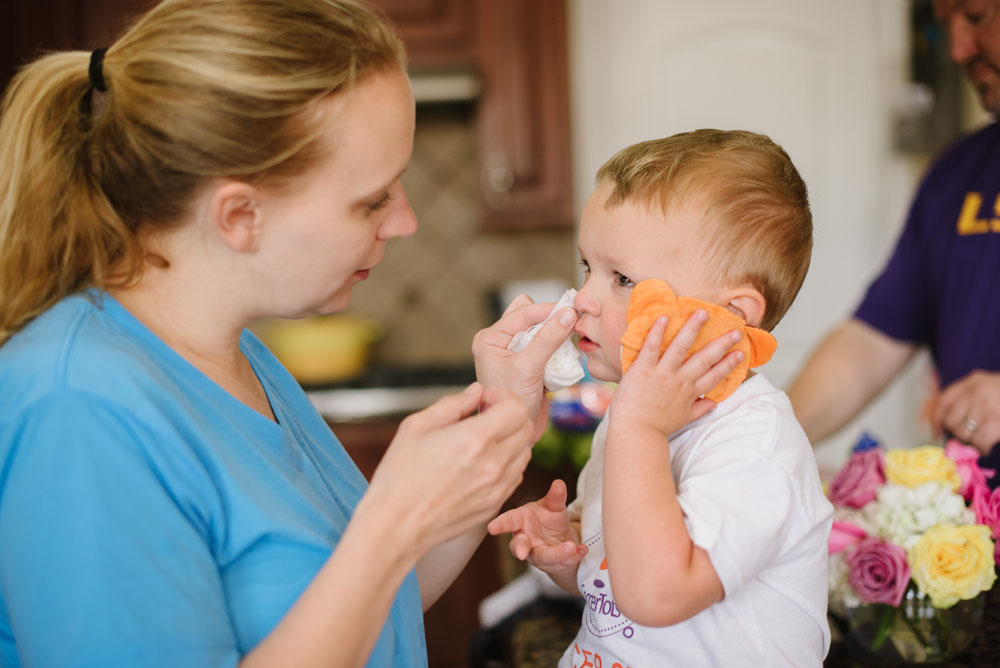 …so he needed to put the ice pack on his cheek to make his arm feel better. Oh, the DRAMA of a toddler! You just cannot make this stuff up. 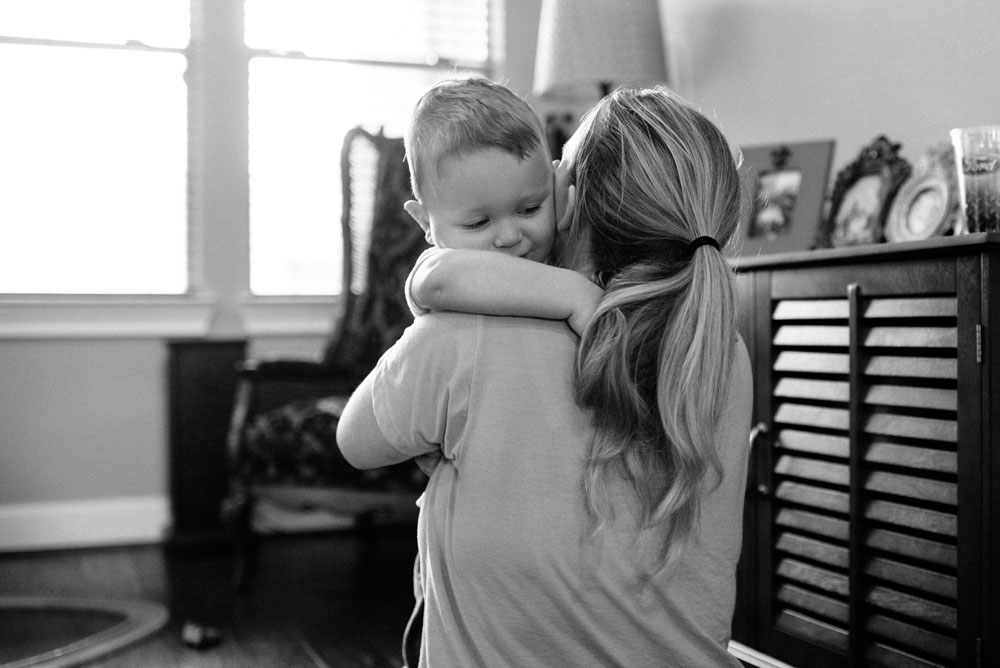 One big hug for Mommy, and he’s off to Soccer Tots with Daddy. Oh, I could just squeeze him all day!

I hope you enjoyed a peek into our morning. Hopefully you saw that in our house, we have fun, we say “yes” to our kids, and we give lots of hugs. It’s our prayer that our boys grow up feeling smothered with our love for them. These are the little moments that make up the stories of our lives. Thank you, Karen, for capturing this chapter of our story.

For more pictures and a peek into Karen’s perspective of the shoot, be sure to check out her post here. And don’t forget to check out the rest of the posts within this amazing series as well!