I never had wedding day jitters. I was always entirely and thoroughly convinced I was marrying the love of my life, my best friend in the whole world. I knew that, if indeed two people are meant to find each other and be together, I had found my person. This year, my husband and I make six years of marriage, and already it’s not been without its trials. A year ago this month, we both decided to start couples therapy. 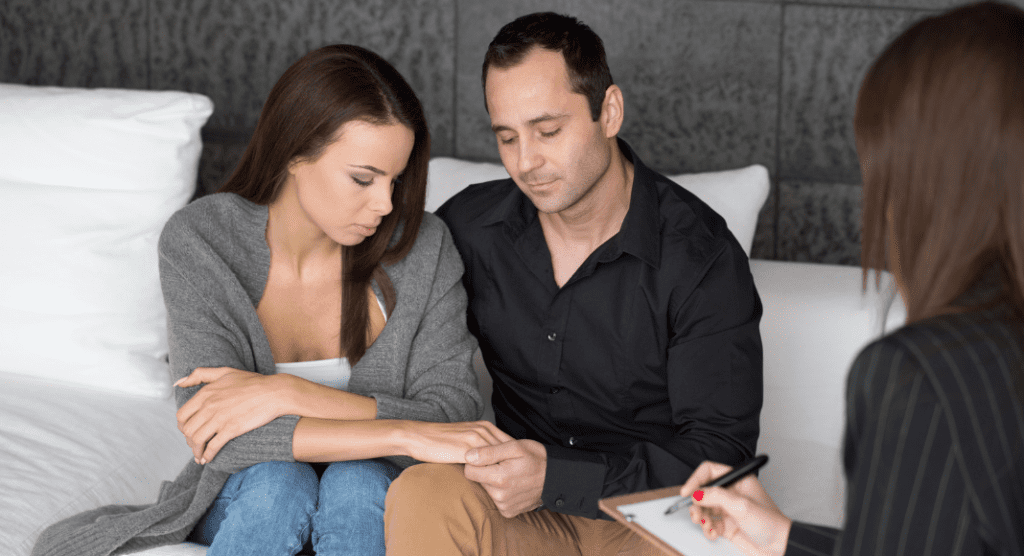 How We Got Here

My husband’s work is very demanding, sometimes requiring him to work 12-hour shifts, 12 days straight at a time. As much as he wants to be present, it is not always possible. One particular fight, wiping away angry tears, I bitterly told him, “I did not sign up to do this alone. I did not sign up to be a single mother, and that is exactly what it feels like these days.” He is often very understanding, and never belittles me or any of my feelings. But, because that’s just what work looks like for him, it still creates a lot of tension between us.

So, we both had a decision to make. We could keep going like nothing was wrong and have our entire lives explode in a year or two, depending on how good we could be at pretending. OR we could admit we needed help, particularly from someone on the outside to help us see our own blind spots and navigate through the troubles we were having. We could have chosen the former. There were many times we definitely wanted to. But in the end, our marriage was worth more than that.

How Couples Therapy Helped Us

I’m sure his answer would be slightly different, but for me, the biggest help therapy gave us was helping my husband see that our preferred ways of being comforted are different. Before, he would jump into problem-solving strategies whenever I would share with him how exhausted I was, and how trying my day was. It was usually that, or he would not know what to say, and just say, “I love you,” which, while a sweet sentiment, did nothing concrete to comfort me.

In short, he needed to learn to just LISTEN sometimes. Now, instead of assuming or doing things his way, he asks: “How can I help? What do you need from me in this moment?” And THAT has been revolutionary in our marriage. When he started practicing that, and saw how much it helped, he was like, “Really? That’s all I had to do to make you feel heard?” Yes, babe. It really is that simple.

Couples therapy also helped us realize how much our own beliefs about gender roles, influenced by our Latinx cultures and upbringings, were affecting our relationship. Having seen my parents fit into traditional gender roles my entire life shaped me, more than my mujerista {feminist} self would like to admit. Therefore, when my husband did not meet my expectations of what a man should do and be in the home, I would take it way too personally. This was especially hard on him, having had an absent father growing up and having little to no framework on how to be a present husband/father. All of that, we were able to uncover and then dig deep into its implications in our relationship. Just the mere awareness helps us navigate through misunderstandings and miscommunications now. Again, revolutionary.

Our final session with our therapist, we shared about our recent Disney trip, how much better it went compared to the time we went when our baby boy was 16 months old. Our therapist asked us, “What do you think made the difference?” We both looked at each other, knowing what the answer was, and I responded, “We worked together, like a team, and not against each other.” We both tried to be aware, either by picking up on cues or just straight out asking, of what the other needed in the moment. We both validated the other’s needs in the moment. We both stepped up.

I won’t lie and tell you all our problems are fixed. We are still very different in many ways and we still argue. We still fall short of the other’s expectations at times and we still need to practice apologizing well. But couples therapy did for us what we could not have done on our own: it gave us hope that our marriage could be better. It gave us the tools to make our marriage better. It is that restored hope, along with effort and constant communication, that keeps us.