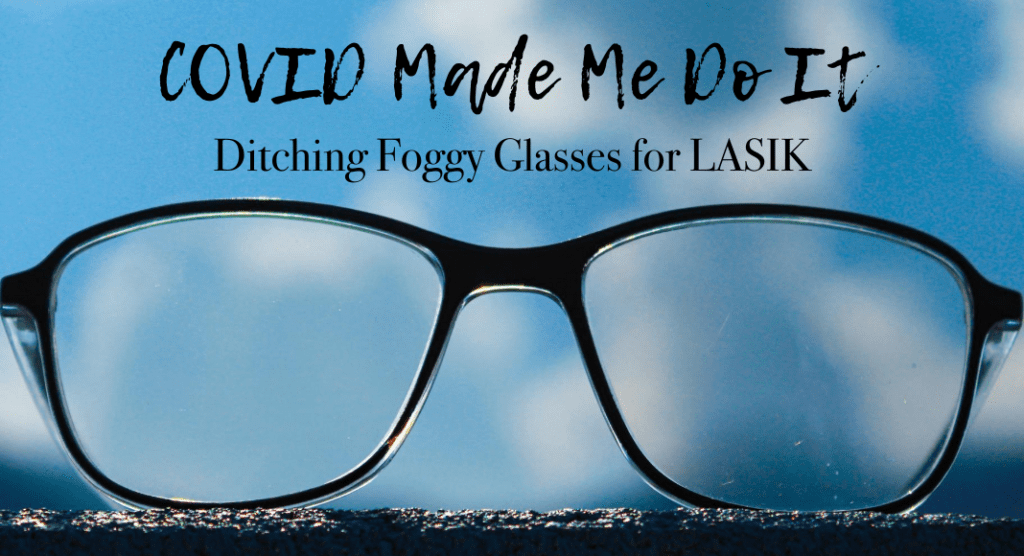 We’ve seen the memes. “Post your most outrageous pandemic purchase in the comments!”. I, being a woman of sound mind and restraint, had nothing to post {new tattoos and home gyms don’t count, right?} until a few weeks ago when a commercial for 30% off LASIK at a well known eye clinic caught my attention. LASIK was not a new idea to me. I have been a glasses-only girl since pregnancy made my eyes incompatible with contact lenses over 12 years ago, and I have batted this procedure around in my mind and shuffled it into the “NOPE” category every time.

“It will change your life!”

And still. Every time. NOPE.

I’m not especially queasy or timid when it comes to things like needles. I’ve never shied away from a tattoo or piercing {that’s a fun blog for another day}. But it took me 10 years to get my wisdom teeth removed, and that was a necessary operation. There was no way I was going to voluntarily get my eyeballs laser-probed and squeegeed when my glasses offered me the sweet grace of hiding the dark circles under my eyes anyways. I mean, have you seen the YouTube videos of a LASIK procedure? {If you are considering LASIK, I would not recommend watching one beforehand. Do it after, you’ll feel much more like a warrior princess knowing you survived that}.

What Changed My Mind

So, what was different today? What drove me to hit send on the “request more info” button this time? Why on Earth would I create open wounds in my eyes during a pandemic? It was 4:30 am. I was on my way to the gym. Maybe I was delirious. Maybe it was the idea of pushing my glasses up between burpees. Maybe it was sheer boredom. But as I stepped out of the car, hooked my trusty mask behind my ears, and got hit straight in the glasses with a double wave of fog from the early morning humidity and my own hot breath, it hit me: if my foreseeable future included this mother-loving mask, it simply could not coexist with my glasses.

I’ll skip the pleasantries with the wonderful staff at the clinic {seriously, they were amazing every step of the way, from before I entered the building through up follow up phone calls and appointments} and get to the real tea. Pinkies up, ladies.

*Do I need to preface this again with how absolutely freaked out I was walking into this? Let me say that in instances of NOPE I am my own biggest hype-woman. I digress. The following is what happened after I had already handed over a cashier’s check to seal the deal.

“Hey there, Sara. I’m going to just fill you in on what to expect during the procedure. We’re going to use two different lasers today. At the first one you’re going to feel a bit of pressure and then you’ll lose your vision for about 30-45 seconds. That’s normal. Nothing is going wrong. That’s going to create the flap.”

Ok, Doc. Really, I appreciate the fill-in, but come again?

“Then we’ll move over to the second laser where you’ll see some very bright lights. You may smell some burning but you won’t feel a thing. I’ll seal the flap and you’ll be out of there in 10 minutes.”

I could’ve done without the extra sensory details of how I would be able to smell the reshaping of my cornea but, again, I appreciate your honesty.

He leaves. Enter nurse with a pre-op care kit. She hands me a cup with a Valium in it. “Just one?” I ask. #jokingnotjoking. I mean, haven’t I said I’m terrified at least twenty times? I cannot guarantee I won’t NOPE right off the table at this point. She washes my eyes with multiple drops, scrubs my lids with something that burned, and left me alone for twenty minutes to consider all the ways this could go wrong, or maybe to let my Valium kick in.

This is a growth period. Twenty minutes of elevator music and voices walking the hallway while you wait for one of those voices to stop in front of your door and lead you into the previously-described-yet-horrifying unknown. This is a great time to practice meditation, box breathing, or sizing up your big-girl panties. My NOPE slowly slid down the benzo slide into resignation. Readiness? Not by a long shot. Accepting the inevitable? Yep.

Then it was time. The sweetest nurse held my trembling hand, walked me to the operating room, and helped me onto the reclined chair. I cried. I tried not to, but it happened. That same sweet nurse held my hand as the doctor took a circular instrument and pressed it onto my eye to create suction and hold my eye steady. As promised, the world went dark as this device put my eye in a triangle choke. Can I tap out? This for me was by far the worst part, but it was over so fast {well, after they did the second eye}.  The flap was made, and we moved to the second laser. My nerves were about as fried as my corneas during this one, but I have to say I felt nothing. It was actually cool to watch my vision wax on/wax off as the doctor put the corneal flap back in place.

12 years of psyching myself out compared to 10 minutes in LASIK surgery. Would I be just as unnerved if I had to do it again for some reason? Absolutely. Was it worth every minute of it? Without a doubt. Even with my eyes covered in shields I could read the street signs on the way home. The clouds were crisp, trees boldly struck the sky, I counted the leaves, the buildings were sharp, I examined them brick-by-brick, and even though I had seen it all before it was as if  I had never seen it like this. The next morning, shield free, I looked at my beautiful babies eyes as they stared into mine, marveling at what technology could do, marveling at what their momma could do. 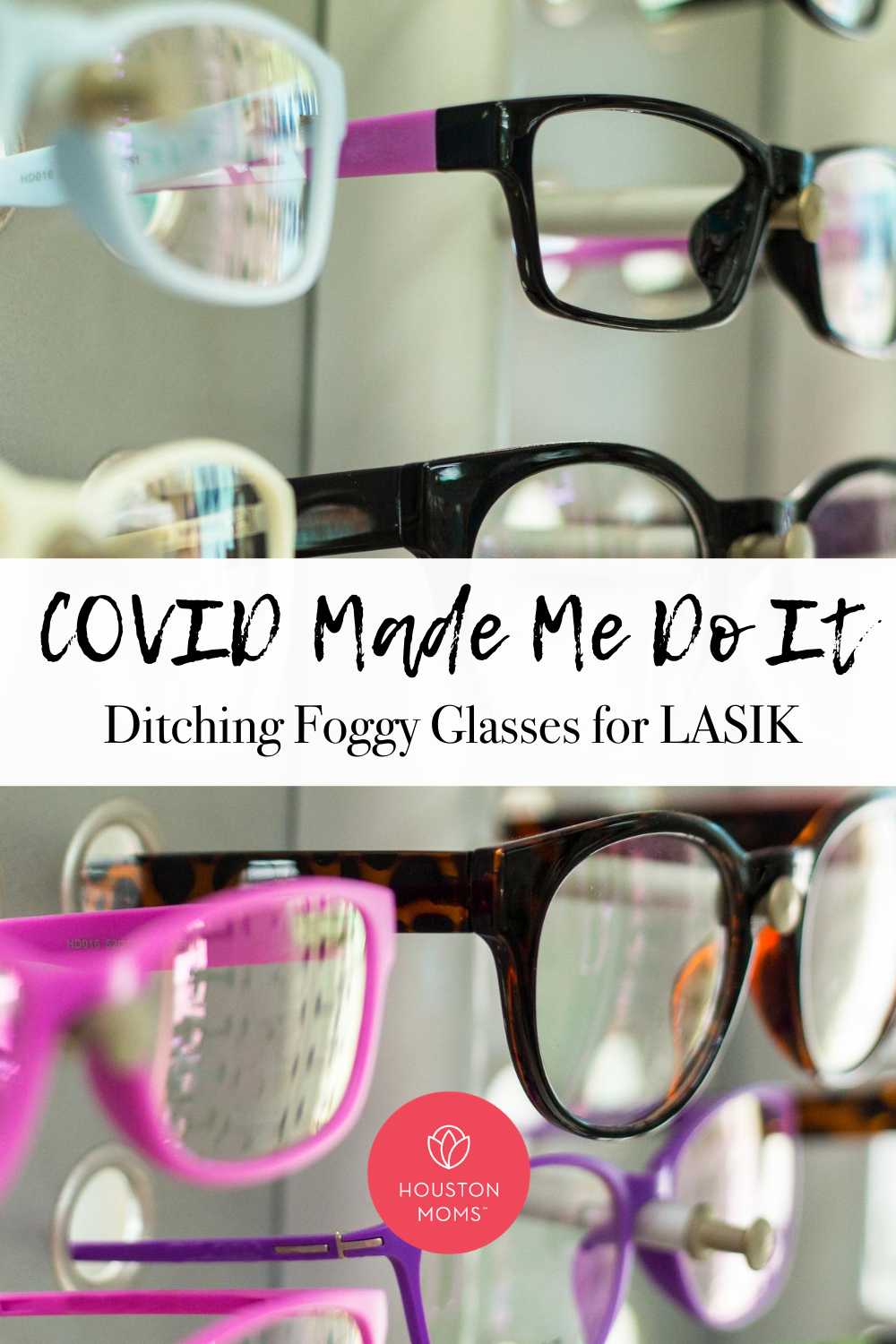