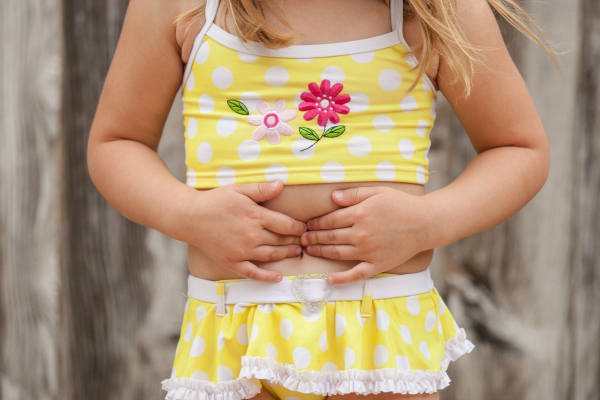 I dread swimsuit season. However, I am completely fine with my appearance. It’s my daughter I worry about.

Every summer without fail, someone comments about her body. And she’s only five.

The first time this happened, we were at a resort when another mom said rather loudly to her husband, “It’s such a shame to see little kids who are so chubby.” Her child and mine were the only ones on the splash pad, and by the way she examined my daughter as she jumped by, I knew who she was referring to.

But chubby? Sure, my daughter – who at the time was only two years old – topped the growth chart in weight, but she was at least on the growth chart, and after the resort incident, her pediatrician reassured me she was not obese. I still insisted on a thyroid test, and her levels came back fine.

I did, however, leave the doctor’s office with a healthy-eating guide, which to be honest, annoyed me. Why? Because my family already eats healthy. After I was diagnosed with thyroid disease seven years ago, our household committed to eating whole and organic foods before our children were born. We rarely buy anything pre-packaged and always have fresh fruits and vegetables available for snacks.

Yet despite our best eating habits, my daughter always has tended toward the higher percentiles on weight. Meanwhile, our son eats the same foods but usually weighs average or slightly below average. Both of our children have healthy appetites, and neither would be considered picky eaters.

So perhaps my daughter is just supposed to look the way she does; not all children are built thin. Maybe she takes after me. I started life on the higher end of the scale, and my height and weight eventually evened out about the time of junior high school.

I don’t think her weight is a result of anything my husband and I are doing as parents, but for some reason, the topic comes up as regularly as potty training or sleep training in parenting conversations. I understand when moms are asking for feeding or nursing advice, but more often than not, they bring up weight solely for the purpose of comparison’s sake.

Every summer, some mom will undoubtedly ask how much my daughter weighs, and then make a remark like, “Oh, my daughter just can’t keep the weight on. All of her clothes practically fall off,” or on the other extreme, “My daughter has always been a little chubby too.”

Really? I’m sure that same mom would be flabbergasted if I outright asked how much she herself tipped the scale.

But the weight of children, for some reason, is regarded differently. Our society’s emphasis on weight begins at birth. Nearly every birth announcement includes length and weight statistics, but it’s not like those numbers vary much nor will likely have any bearing on a child’s life aside from comments like, “22 inches? You’ve got yourself a basketball player,” or, “Ten pounds? A linebacker for sure.”

As the years go on, pediatricians continue to track weight, and for good reason – to ensure healthy development. Not for parental comparison.

To avoid such comparisons and comments, I have admittedly found myself choosing swimsuits and outfits to flatter my daughter’s figure. But I shouldn’t have to. She’s a kid. I shouldn’t have to be concerned about what some mother might say in front of her.

Thanks to such comments made by peers, friends, and even family, I spent a good chunk of my teenage and early college years dieting and teetering along the line of what some might consider anorexic. I don’t want my daughter to go through that kind of body-image scrutiny. As her mom, I’m trying to do everything I can to instill confidence in her appearance so when she becomes a teenager or young adult, she can focus on more than just her weight.

At 34 years old, I finally feel comfortable in my own skin, and I don’t think it’s too much to ask to help my five-year-old daughter feel the same way. 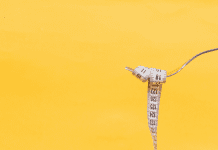 Leaving Diet Culture: My Changing Relationship with Food, My Body, and Weight 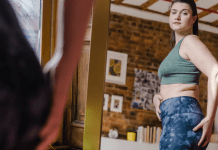 My Post-Pandemic, Body Positive Gift to Myself

Honoring our Bodies on Mother’s Day – and Every Day