We bought our house in Meyerland two and a half years ago…two months before the Memorial Day flood. We were moving back to Houston from Friendswood and had just put our home there on the market, so we weren’t really looking at anything seriously for fear of jinxing our home sale out there.  And then a house popped up on HAR. It was built in 1961, but had been remodeled and updated over the years. It had the four bedrooms we needed for our oversized family, and would require minimal changes to become handicapped accessible for my husband. When we stood in the front yard and when we sat in the living room, it felt meant to be.

We fought for our house. We fought hard for it as apparently we weren’t the only ones who felt that way about it. Sure it was in a floodplain, but so is a large percentage of Houston as well as every house I had ever lived in growing up here {none of which had ever come close to flooding}. We live in the Bayou City, after all.  And this house had been here for 54 years without ever taking on water.

Two months after we moved in came the Memorial Day flood of 2015. While our house was fine, for the most part, water seeped up through the foundation and damaged our flooring. We were lucky compared to so many, and we went about repairing and refinishing the floors that had seen the children of two previous families walk those wood planks as they transitioned from tiny toddler feet, to school age sneakers, to basketball shoes and heels before leaving their parents empty nesters, and we were next in line. Our house had history and we were determined to preserve it, down to the wood floors.

The Tax Day flood followed less than a year later and we had a narrow miss, but we watched our community suffer the devastating effects of a second catastrophic flood just weeks after many were finally able to return to their recently repaired homes.

Then we heard the warnings about Harvey.  In our hearts, we knew we weren’t going to escape this one.  Our original plan was to send my husband {who uses an electric wheelchair – not good in water} and our wheelchair accessible van that would take nearly a year to replace should it get flooded, to his parents’ house. I would stay behind with the children to watch for water and save what I could if it started to come in the house.  As the week progressed and the warnings became more dire, I caught myself making a mental note to grab the life jackets out of the pool house for the kids “just in case.” And that’s when I realized staying behind had the potential to be both dangerous and traumatic and that wasn’t something I wanted our children to experience.

So I took 30 minutes to pack three days’ worth of clothes for each of us, secure our animals in the car, and put the most important of the childrens’ toys and possessions on top of furniture and beds.  It was a frenzy.  I remember the kids’ looks of confusion and the inadequacy of my explanation as to why we were doing this.  In my mind, it really was still “just a precaution.” 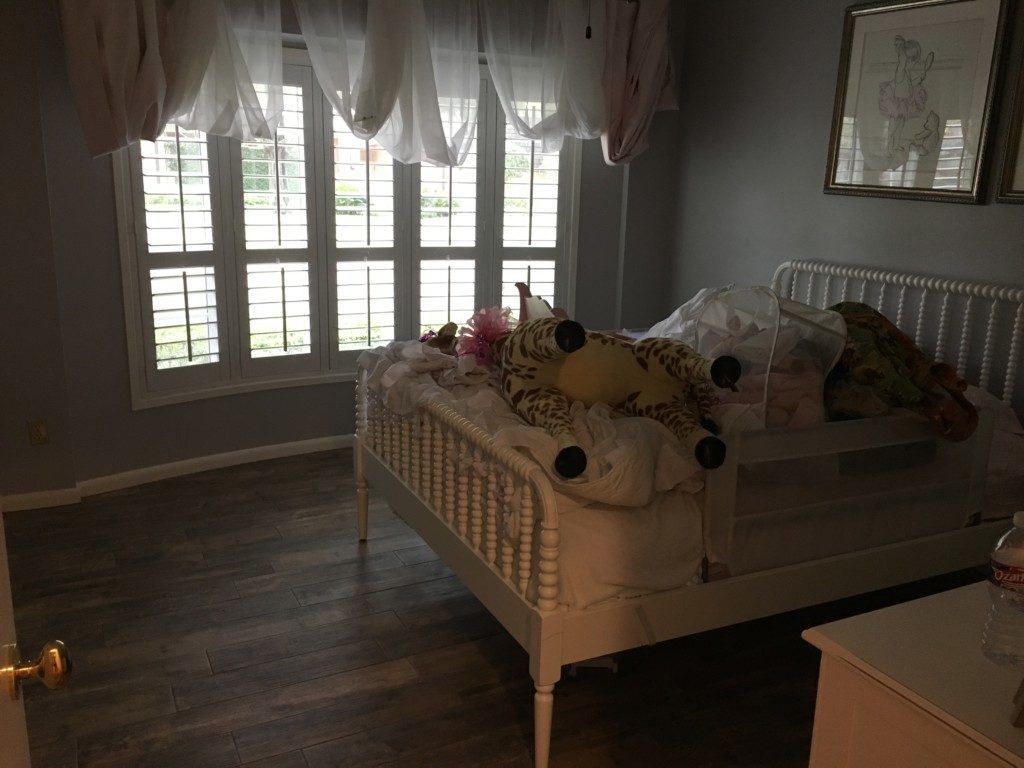 We took one plastic bin of their very favorite toys and books with us.  Just one.

What followed was a series of sleepless nights for my husband and me, where we watched the bayou levels through the flood control website 24 hours a day, refreshing over and over again while the website intermittently crashed. We had periodic communications with a sweet family next door who had just moved into their “never flooded” house two months prior and had to be rescued by boat.  We knew the water levels and saw a picture of the street and of our house from the backyard.  We knew,  from a distance, what we would be coming “home” to. 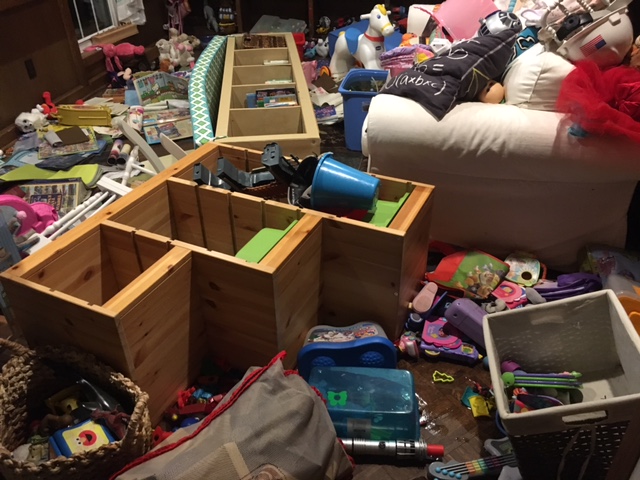 The mind is a curiously protective thing, and acceptance has come in stages.  I’m not really ready to rehash many of those stages, and I’m pretty confident I’m still in one, but the realization of what had happened was gradual, and that is a blessing. The first few days after we got back were filled with loving friends who were sacrificing their time and cleanliness {and frankly, risking their health} to come to our aid, and they tolerated my inability to think clearly or make decisions.

They didn’t say anything as I sat on the back patio obsessively disinfecting tiny plastic toys that were meaningless to the rest of the world but were everything to my kids.  In fact, they grabbed the bleach and jumped right in.

They didn’t point out my irrational fear that things would just disappear, to be thrown away without me ever knowing they were gone when I insisted that nobody touch large portions of the children’s bedrooms and play rooms because I needed to do it myself and didn’t want anything moved out of the house.

They lovingly let me have a little space when I went through the waterlogged books at the bottom of my middle child’s bookshelf and sobbed in the floor when I found the copy of Corduroy I had read so very many nights to each of my children when the lights were dim and their hair smelled of bubble bath and their little warm bodies were snuggled against me, tucked into their blankets.

I know these are “just things.”  It’s all “just stuff” and “at least you are all safe.” I know all of that. I know books and toys can {usually} be replaced.  And I know that this isn’t cancer or a brain tumor.  This isn’t that and I fully acknowledge that.

But this wasn’t just a loss of “stuff.”  We had a life here.  It looked a certain way and smelled a certain way and followed a pattern and a routine.  We had habits and favorite places to sit on the couch that I bought right out of law school and had sat on for the past 14 years, first with my cherished dog and then with one child, then two, and then three.  There were mornings with coffee and cartoons under quilts on that couch.  There were beloved stuffed animals that were worn from years of “love” almost to the point of “becoming real” in that very Velveteen Rabbit sort of way {another book lost}.  It was “stuff” but it was the stuff we loved and it was the background canvas on which we painted our lives.

And it’s gone…discarded like it, and the life we lived there, meant nothing.

It’s in a rotting pile filling up our front yard, halfway up to the house.  It’s covered with flies, it smells, and human vultures have dug through all of the bags and scattered them around so that every time the kids and I drive into my driveway, we see again a beloved item from our past, a Christmas toy or a baby blanket and the memory of what that thing was to us comes flooding back, superimposed on the vision of it sitting among a pile of garbage, waiting to be taken to the nearest landfill. I have dreams every night that I’m digging through the piles of stuff in our home searching for something important to the kids and I can never find what I’m looking for.

Just scrolling through my camera roll on my phone has become a dangerous prospect as photos of my children in our home are likely to ruin an entire day.  We will never have that back.  Sure, our house will be repaired, and we will eventually move back into it, but the life we led there is gone forever and we never even said goodbye.

Do you know that I can’t remember leaving the house that day?  I’m sure I was caught up in piling the kids and animals into the car and hoping we could find enough gas to get to San Antonio, but I wish so much that I had taken a minute or two, just a little time, to walk back through it and look at each little room and take it all in… The way the curtains in my daughter’s room would move in the breeze from the fan while I was putting her to sleep, the light from the house next door that shone through my son’s window at night from the elderly man who lived there his whole life {and who will never live there again} cooking his dinner alone after spending the day with his wife in a dementia facility… The way the wood in the floor would creak in just that certain spot, our playroom that was full of love and memories and tiny treasures that were used and passed down from my 11 year old, to my 6 year old and finally my 2 year old.

I wish I had just taken one minute to look around, take a deep breath in, and absorb that life before I had rushed out the back door, shutting it behind us all.

We are staying in a little apartment now on the other side of town, far from the children’s school {also our church}, which was 70% destroyed in the flood. The kids are adjusting, as children do. My oldest asks if certain things survived from time to time, but my middle child is different. I see the question on his face and the longing, but he’s afraid to ask. My daughter explains to people that a flood broke her house and that it’s getting fixed, but frequently asks us to “just dry it off” so we can go home. And my heart breaks a little knowing that the two youngest may forget completely what our home was like before all of this.

Part of me wants this year to just be over. I want us to not remember it and for us to just wake up like Rip van Winkle once we are back home, but children can’t be put on “pause” and I’m not willing to forget a year of their lives, even this one.

My hope is that one day, when they are grown, we will be sitting down to Easter Dinner and one of them will casually say, “Mom, do you remember when our house flooded and we had to live with other people and in hotels and in that tiny little apartment for a year while everything got fixed?  Wasn’t that crazy?” and then smile over a plateful of green beans.  And maybe that will happen eventually…

Maybe it will even happen in our very own dining room.