March is Women’s History Month, and more specifically, March 8th is International Women’s Day.  Historically, women have offered the world so much sacrifice and art and activism and beauty and love, that these dates should be celebrated for the holidays that they are. As we observe the important role of women in American history, it’s equally important to think about our own lives and how our individual histories will unfold. Maybe we haven’t made any visible or significant contributions to the world, but every day we, as women, contribute to our families, our kid’s schools, our communities.

That is important work.

Each of us has something to offer the world around us, and our specific, unique gifts will never be discovered if we lose ourselves trying to fit into pre-designed molds of what being a woman is supposed to look like. The beautiful thing about womanhood is that it is defined by each us of individually. In fact, my womanhood has been defined and re-defined over and over again.

As I mature and grow into myself, I find that my definition of what it means to be a woman continues to evolve, and as a result of my personal evolutions, those around me are directly impacted.

My teenage self was absolutely sure I knew exactly what it would take to be a woman: a car for my 16th birthday, a boyfriend who was on the football team, and a large network of flaky friends. Few things were more important than other people’s perception of me. Boy, was my first realization of womanhood wrong! I had no idea that beauty would be so fleeting or that my thin teenage frame would morph into some altogether different body type. Who knew quality is more significant than quantity when it comes to friendship? Back then, womanhood was external.

And there was the college. And feminism. And non-conformity. That’s when I thought womanhood was all about demanding fair and equal treatment. I wanted nothing more than to be a strong {black} woman who wouldn’t take any crap off anyone. I thought being a successful woman required a political statement, an attitude, and a mile-high brick wall to protect my kind, gentle spirit. Womanhood became a power struggle.

And then I became a mother, and I was sure that being a woman and a mother required an all-inclusive sacrifice. I had always believed that being a good mom meant I could no longer have an identity outside of motherhood, and if I did, my child would suffer in some way because of it. I allowed myself to be swallowed whole by the notion that I needed to attend to every whimper, monitor breathing patterns during sleeping hours, and grow, pick, prune, and puree all organic food, and do all the other things that society tells us that good, 21st century moms are doing. My womanhood felt like martyrdom.

And now here I am at age 32 settling into a new, less demanding version of being a woman. I know that appearances mean nothing if we’re crumbling inside. I’m learning to live life in the body that I have, rather than constantly mourning the body of my youth. I’ve figured out how to be strong without being abrasive or crude. My feminist agenda now incorporates more grace and less judgement. My son is the source of my greatest joy, but he’s not my only source. I love him dearly, but I still make room for movies with my girlfriends and massages and occasional kid-free shopping. I’m learning that being a woman is much grayer, and less black and white, than I could have imagined.

As women, we often stuff ourselves into the boxes that present themselves in our lives. Wife, mother, sister, friend, employee — the list goes on and on. We dedicate ourselves and our lives to all the honorable tasks that have been assigned to us or that we signed up for, and sometimes we lose bits of ourselves along life’s way. We forget that although they are important facets of our existence, these roles alone don’t have the capacity to capture, in total, who we are.

Think of Women’s History Month personally and consider what your story of womanhood will be. This month, and for the rest of your life, take ownership of your womanhood. Celebrate it wildly and passionately. Re-define it if you please. But whatever you do, free yourself to be the woman YOU want to be. Girlfriend, it’s your birthright and your privilege, and you certainly deserve it.

May we know them.

May we be them.

May we raise them.” 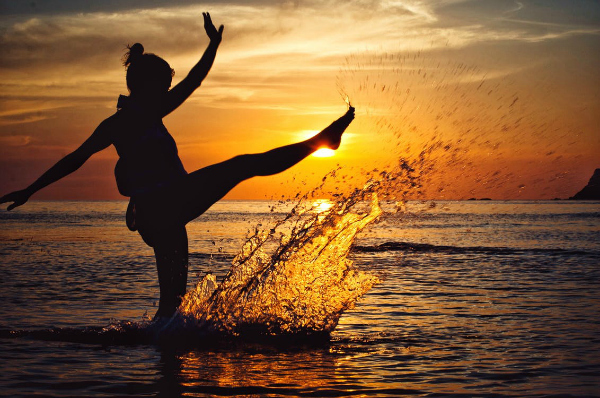 Breaking the Mothering Trap:: Encouraging Independence in Our Children