My six-year-old doesn’t eat vegetables. He doesn’t eat chicken. He doesn’t even eat pizza. In fact, he doesn’t eat at all. My son G is exclusively tube fed. Due to his medical condition, he is not able to chew or swallow food, and his stomach wouldn’t tolerate food even if he could. This is G’s “tubie” story…

When G was around a year old, he started projectile vomiting several times a day. He had never been a great, or even good, eater, but we had managed to make it through his first twelve months with fortified formula and desperate attempts to get him to eat pureed solids. But when the vomiting continued day after day, as a mother, I finally reached my breaking point. Scared and stressed, I had a friend drive us to the ER and begged them to help my baby hold down his food. At first, the doctors were skeptical. Although G was developmentally delayed and had also started having seizures, they kept telling me he probably just had a virus. But after a few days in the hospital, he refused most food that we offered him and threw up the little bit that he would eat. He was diagnosed failure to thrive, and after more than a week in the hospital, he got his first feeding tube, a nasogastric {NG} tube.

NG tubes are feeding tubes that are inserted through the nose and passed into the stomach. They are usually temporary, and most people who have had or seen babies in the NICU are familiar with this type of tube. G had his NG tube for seven {long} weeks. At the time, we were hopeful that eventually G would learn to eat normally and wouldn’t require long term tube feeding, but this was not the case. When he was 16 months old, he had surgery to place a gastronomy tube {G-Tube}. 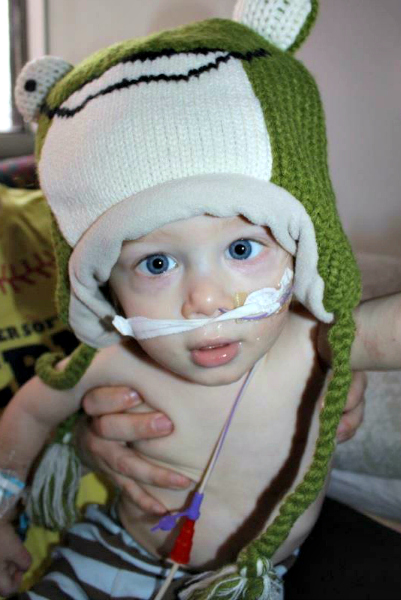 G-tubes are inserted in the abdomen, and food is given directly into the stomach. G had a button with a small water-filled balloon holding it in place in his stoma {hole in his abdomen}. We have always used a pump to deliver the formula, but some tube-fed kids are fed with syringes or simply a bag using gravity. While the G-tube worked wonderfully and made the actual feeding process so much less stressful, after a few months, G started projectile vomiting again. There were days where he would throw up 8-9 times. After a few desperate conversations with his gastroenterologist, we decided to try a gastro-jejunal {GJ} tube. 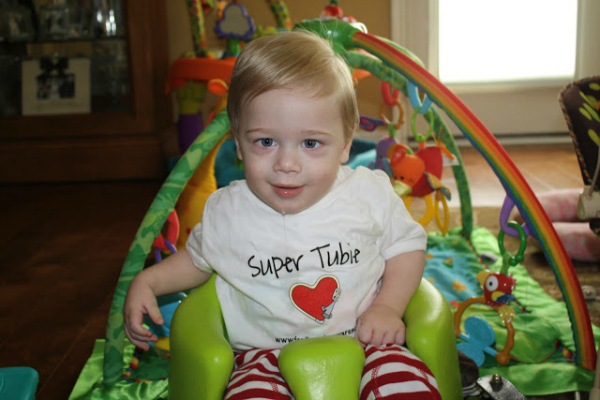 GJ tubes have a tube going into the stomach, just like a G-tube, but have an additional tube that goes directly into the small intestine. With a GJ tube, there is an option to feed into the stomach or the small intestine. Since G currently vomits almost everything that goes into his stomach, all of his food and most of his medicines are pumped into the J portion of his feeding button. Because the small intestine doesn’t expand like the stomach is able to, G can’t be fed large amounts of formula at a time {bolus feeds} and instead has to be fed small amounts of formula over the course of the day. He is hooked up to his feeding pump for about 20 hours a day. This isn’t a huge issue for G because he doesn’t walk or move around on his own, so his pump is either clamped on a pole or inside a backpack and hung on the arm of his wheelchair. 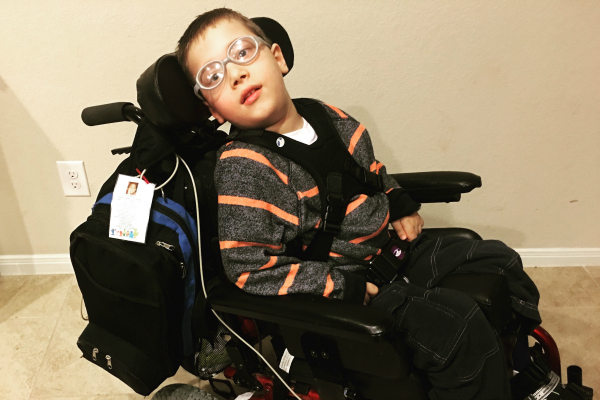 Feeding tubes are placed in children for a variety of medical reasons. Some kids eat food by mouth and only use their tubes for hydration and medication. There are children who do eat, but need their tubes to provide extra nutrition. And then there are children like G, who don’t eat or drink anything by mouth and rely on their feeding tubes for all their nutrition, hydration, and medication.

After more than five years of parenting a “tubie,” I can honestly say that G’s feeding tube is one of our biggest blessings. He wouldn’t be alive without it. I know exactly the amount of calories he’s getting each day, I don’t have to fight getting nasty-tasting medicines into my kid, and most importantly, he’s fed.