A year ago, Pandora was in occupational therapy, and one of the skills she needed to work on was crossing the mid line. To help her with this and other motor planning skills, we signed her up for softball, and it turned out to be one of the best ideas we have had. With three seasons now under her belt, Pandora learned invaluable motor planning skills, improved her endurance, learned to follow multi-step directions, achieved gross motor skills, and practiced her communication skills with her team. Pandora received all the therapy she needed in one sport, a win-win for her.

What I didn’t realize was how this same sport would transform our other daughter Penelope in ways I never imagined.

Penelope had been our tennis player. When social situations give you the heebee-jeebees, you tend to gravitate to things that are small in numbers. It was no surprise Penelope chose tennis as her sport at age 5. She enjoys playing outside and enjoys her friends; however, meeting new people was intimidating, and feeling comfortable in a large group was really tough. Tennis was a sport she could play individually, while a few {four or less} children were also on the court. Slowly, she became friendly with these kids. Penelope played tennis until this past February. At age eight and a half, she asked to play softball.

I’ll admit she initially asked because she hated going to the fields for her sister and feeling left out while we cheered for Pandora. Regardless of why, she asked, so we stopped paying for tennis and signed her up for 8U softball.

Evaluations happened while my husband and I were out of town. Penelope cried with nerves and refused to go. From another country, I told her {via FaceTime} she was going and told my friend you take her there no matter what. Penelope went and crushed it. All those years in tennis gave her eye-hand coordination she didn’t realize she had. Plus, as luck would have it, she saw a few acquaintances from school at the fields which helped her calm down and avoid the “I don’t know anyone” feeling.

Penelope learned what team she was on a week later and was excited to know a few names. None of her besties were on the team, but she knew of the girls from school and the neighborhood and was all smiles when I went through the roster.

From February through April, Penelope played softball. She had a coach that set appropriate expectations and had a great tough-love personality. The team mom, a fantastic woman, made the dug out warm and friendly. These two were a perfect pair for not only Penelope, but the entire team. I owe them a debt of gratitude.

Penelope had two practices a week plus a game. The rainy weather made for tricky weeks when we had make-up games, but none of this mattered to Penelope. She just wanted to play. Homework was completed quickly, bed time was pushed later, slumber parties were left early. None of this mattered to Penelope once her cleats were on and she was on the field. Her happy place for three whole months was the softball fields.

Penelope grew as an athlete. But more than that – what she needed, softball was able to provide.

Softball, thank you.
I didn’t know all you were going to teach us. 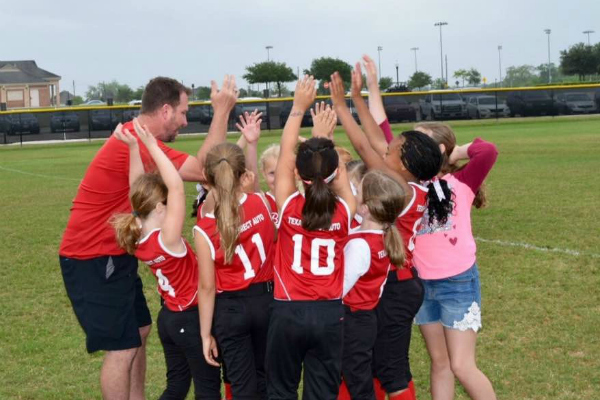