Today, on the 18th anniversary of 9/11, we are honored to share the personal story of Houston Moms Blog’s contributor Vicky, who lived just four blocks from ground zero on the day of the terrorist attacks. 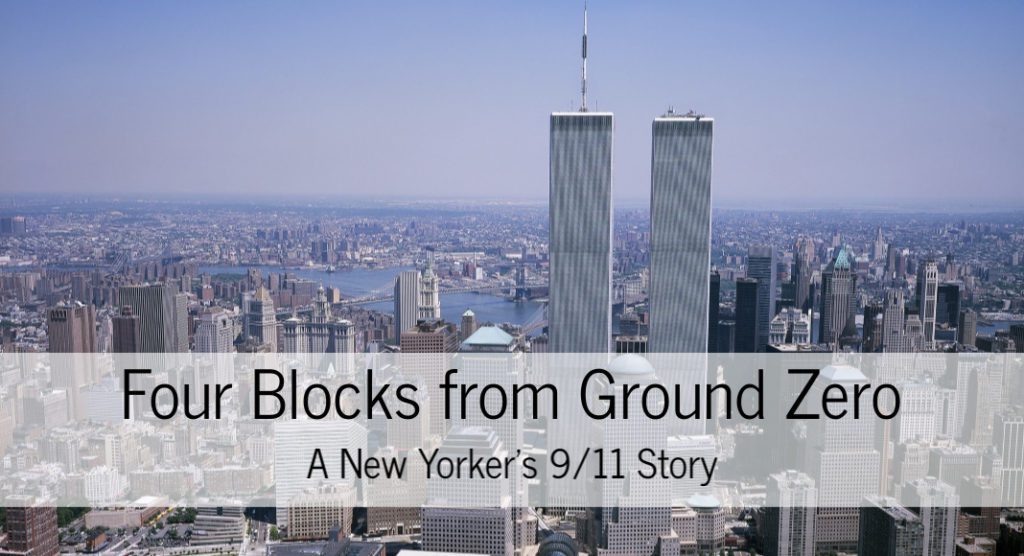 I woke up in a dark room on the morning of September 11. It was dark not because it was early, but because my bedroom had no window. Atypical living situations are common among young people who are just grateful to have any sort of digs right in “the city”. I was sharing a space in a new doorman building on John Street with my older brother, whose bigger paycheck carried most of the rent burden for our apartment downtown near the World Trade Center.

The lack of a window in my sleeping quarters couldn’t diminish my burning love for New York. This place was everything I had always dreamed of…vibrant, alive, and full of promise.

That morning I rushed out of my building as usual, waving goodbye to Alan the doorman. I pushed my way out the glass doors with my work bag slung over my shoulder. It was almost 9 AM but the subway station was right around the corner. I was running behind as usual. Thankfully my office was only a few stops away. As I was about to descend into the gaping mouth of the subway entrance, I noticed that people had stopped walking and were watching something behind me.

I turned to look over my shoulder and saw huge clouds of gray smoke billowing from near the top of one of the World Trade Center towers, just four blocks north. Pedestrians were pointing and talking to each other. I heard a man say something about an airplane. It sounded like a rumor to me.

Perhaps it was my youth and inexperience, or maybe I was already a jaded New Yorker, but I was nonchalant about the whole thing. Just a week before, I didn’t blink twice when I saw a man riding a unicycle in the middle of 34th street after midnight, possibly drunk. What’s another emergency? Besides, New Yorkers know never to believe everything you hear, or even see. I wasn’t sure why people were milling around. What were we supposed to do? There weren’t even any flames visible from what I could see, just a bunch of smoke. I had a fleeting vision of firemen in my head, and then descended down to the subway platform.

As I rumbled along on the red line headed north beneath the city, everything above ground had changed.

My subway stop let me out right near my office. I darted up the building and stepped into the large expanse of the advertising agency where I worked. Something felt off. I headed to my cubicle but no one was around. I peered around the corner and saw everyone huddled in a director’s office, watching the television set we used to screen commercials. It was tuned to CNN. I saw the unbelievable news that airplanes had crashed into the Twin Towers.

I went back to my desk in a panic, trying to call my brother’s cell phone. He was still in the apartment when I left no more than 20 minutes ago. And he worked in a building right next to the World Trade Center.

Cell phone service was crippled as calls overloaded the system .  I couldn’t get through. After switching on my computer, I checked my AOL Instant Messenger hoping maybe he had signed on. Messages from friends popped up on my screen, asking if I was OK. “I can’t find my brother…pray!” I typed back.

How long had it been since I got to the office? Where was he? Did he start walking to work already? All these questions kept me pacing back and forth. Then, the phone on my desk rang. I picked it up. It was my brother!

I was so relieved to hear his voice. Later, I would give my parents the news that I had finally heard from him. They tried to sound calm and brave, but I knew the truth.

My brother told me that the police had blockaded the nearby streets and ordered everyone to stay inside. We were on the phone, discussing what to do when the unthinkable happened. The first tower fell.

Colleagues watching the news several feet away from me cried out that the South Tower had just collapsed. My brother said he felt the shaking. The one window we had in the apartment, which faced an alley, had gone dark from the massive amount of dust and debris that rushed through the area and blanketed downtown. We agonized about what he should do next. I didn’t want to hang up with him, unsure of when we could get in touch again. I told him to be careful.

Walking in the Street

Sometime during mid-morning, my boyfriend walked south on Broadway to get to me. He made his way on foot against the crowds of people marching north to get away from Lower Manhattan. All public transportation had halted and pedestrians filled the streets. No vehicles were allowed on the bridges connecting Manhattan to the rest of the world. An impromptu boat rescue ended up evacuating hundreds of thousands of people who had no other way off the island. The usually noisy air traffic overhead had ceased as well, except for the strange sight of military jets zooming across the sky.

It felt surreal walking in the middle of the street, passing by people covered in dust who must have just escaped tragedy. I saw a big coach bus inch up on the road parting the crowd, and through the large windows, spotted someone covered in dust and ashes.

By 5 PM the evening of 9/11, authorities shut off the power to my apartment building. That’s when my brother packed a bag and left. We were not allowed to return to the apartment, along with all residents who lived within certain blocks of Ground Zero. The mandatory evacuation was in effect indefinitely.

The next day we learned from our doorman that people who needed to retrieve pets were allowed to return. We decided that dust bunnies counted and crafted a plan to get back to our place and pack some things.

The city was closed below 14th street and public transportation was still mostly suspended. My boyfriend and I, along with my brother and a couple of his friends, took detours, snuck around barriers, and finally slipped onto John Street.

A tank, completely out of place just steps from the world’s most important financial center, sat silently in what looked like a ghost town. Military personnel guarded the empty streets and a soldier with a rifle slung over his shoulder stopped us to ask for identification. We sat down on the concrete curb to wait for clearance. Parked cars were covered in a thick layer of that infamous dust. White ash filled the sky and rained down all around us, and it would do so for weeks.

We looked up at the ghastly flakes floating so gently towards the ground. One of us remarked “Yup, I’m breathing in people!!” We laughed. We had to. It was either that, or fall face down on the ground, weeping from the grief that hovered at the edges of our awkward humor.

Youth and resiliency did not protect us from the soul crushing reality that so many people had died so suddenly on 9/11. So many families had been wrecked in an instant. I was thankful that I didn’t lose anyone, but we all knew someone who did.

I kept hearing how the whole nation mourned, but for New Yorkers, there are no words to adequately describe our experience of the before and after. That night in the after, not knowing what else to do, a group of us had gathered at a friends’ apartment. We prayed, sang, and wept for everything that was lost on 9/11.

In many ways, I am still possessive about the grief.  To this day I have yet to watch a documentary about 9/11. I don’t see the point. We were the ones who had to live in the aftermath; the “see something say something”, the anxiety of riding the subway wondering if that man’s backpack looks too bulky, and whether we might just blow up before we got to work. Even today, every airplane seems to fly too low.

When I first moved to New York, I was told that I could orient myself by looking up. If I saw the Twin Towers, then I was facing south. After 9/11, with the towers gone, I would often get confused. The scar was not just on our skyline, but also on our collective psyches. Still, we were a city that refused to break, and we didn’t.

After about a week, my brother and I were allowed to move back in. The government gave us free HEPA air filters but I still felt stifled by the atmosphere of pain and loss downtown. I wanted to escape the shadow of the towers. When our lease was up the next year, we went our separate ways and left Ground Zero behind.

Yesterday my young daughter asked me what 9/11 meant and I didn’t really know how much to say. I’ll have to talk it over with her dad, who was the boyfriend in these memories. We will be sure to tell her that the story is not over. The buildings and the people may be gone, but those twin light beams now stretching up to the heavens remind us that the Spirit cannot be crushed. I’ll tell her to look up to The One who will redeem all things one day, even this. 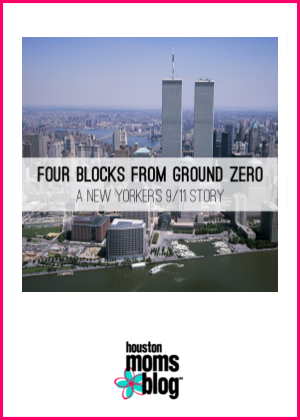