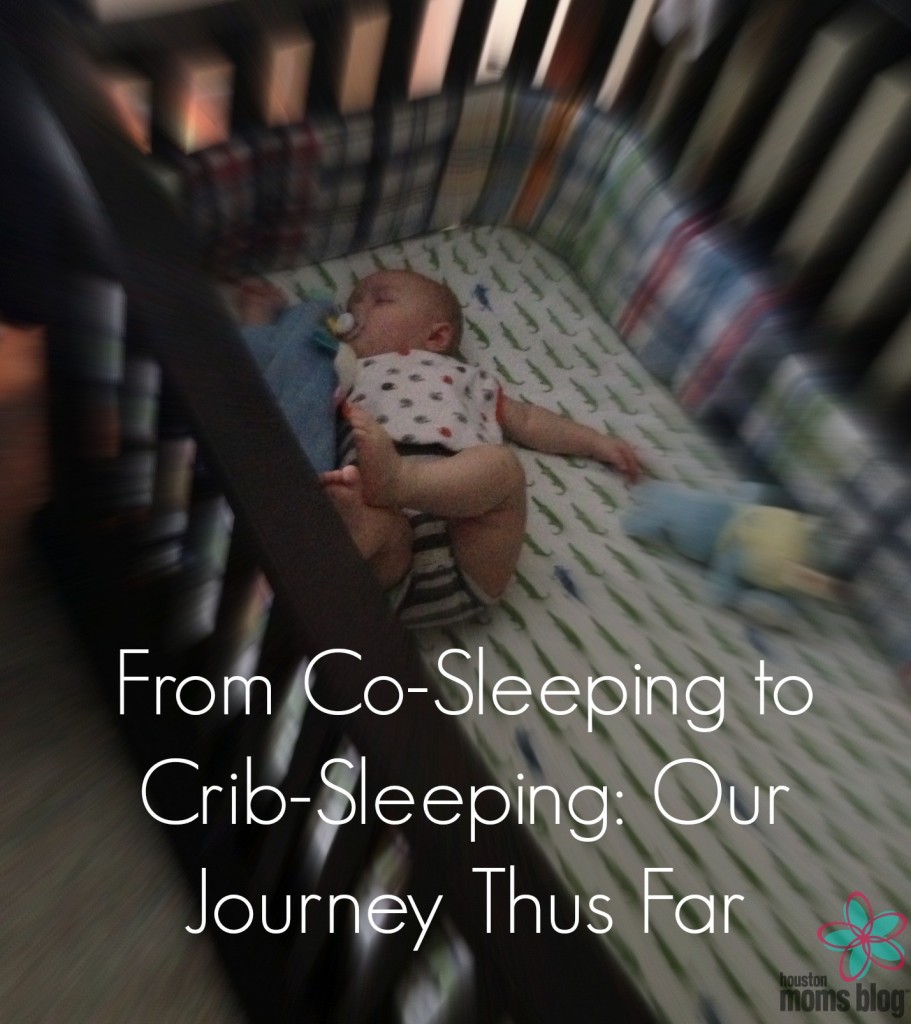 A Baby in our Bed

When our little boy was born, I wasn’t sure how I was going to handle sleeping arrangements in our house, and somehow I ended up sleeping in the living room on the couch while the baby slept in his Rock ‘n Play Sleeper. We slept this way for about six weeks when one night I just couldn’t take being on the couch any longer. That night, I went into the bedroom with the baby, crept into bed with my husband, snuggled the baby next to me in the crook of my arm, and we slept that way all night. I told myself I wasn’t going to let the baby sleep in the bed again, but the next night – I did it again. And we both slept all night. We continued this pattern until…oh, about three weeks ago. Yup, I said it. Three weeks ago. My son is now almost 11 months old. We had been co-sleeping with our little guy for over 9 months. I believe that I continued to let him sleep in our bed for this long because he just slept SO GOOD in bed with us. I didn’t have to worry about him – he was right there next to me. When he was ready for a bottle, I knew it immediately. When he was awake, I could tell right away and was right there to take care of whatever his little needs were at the time. This all changed three weeks ago…the baby decided that sleeping in bed with us was like a party or something! What was once the easiest time to get him to sleep was now a very tough situation. He rolled all over the bed, he fell asleep for maybe two hours and was up wide awake ready to play, or he just didn’t sleep very soundly. I knew in my heart of hearts that something just had to change. I knew what was next…sleep training. In his own bed.

After three nights of being up at 2 or 3 am until it was time for me to go to work at 6 am, my husband and I were SO tired!!! I didn’t know what to do. I knew that something had to change, but I just didn’t think I was ready for the baby to sleep in his own room in his crib. I knew that he was ready though – his actions were telling me that he was ready to sleep in his own bed and have his own sleeping space. My husband and I both did some serious research on what the best way to sleep train the baby would be, and I came across this article on BabyCenter that talked about the Ferber method of sleep training. In a nutshell, this method required us to develop a sleeping system that we would follow each and every single night and then placing an AWAKE baby in a crib and let him soothe himself if he cried. The difference though between this method and the basic ‘Cry It Out’ method is that instead of just letting him cry, I would go into the room and soothe the baby for a period of time and then leave. If he would cry again, I would go back into the room after a set period of time and soothe the baby once again. The pattern would continue until the baby eventually settled into sleep.

We decided that we would begin the sleep training journey on a Friday night – the theory behind choosing this day of the week was simply because neither my husband or I have to work on Saturdays. So if we were exhausted from being up all night, we would be okay on a Saturday! So, the process started with beginning our sleeping routine – at 8:30 pm it started with bathing the baby. Once he was bathed, we settled into the rocker in his room with his blankie and read a couple of books. After the books, I fed him his final bottle of the night. Once the bottle was polished off, I rocked him for a short bit {maybe 5 minutes} and then placed him in his crib. He instantly shot right up into the sitting position and began to play. I told him goodnight, shut the door, and sat in anticipation in the living room with the baby monitor glued to my hands. I watched the baby play in his crib for a good 30 minutes before I heard the first hint of a whine. Then the whine turned into a quiet cry. Then the quiet cry turned into a mad sobbing. My heart was broken. I knew that according to Ferber, I needed to wait a set amount of time {short at first, then progressing to longer times} before going into the room to soothe him. I set the timer on my phone, waited for three minutes, and then went into his room to pat his back and whisper “shh shh shh” to him. I placed him on his side with his blankie in his arms and then left the room again. As soon as I left, he whined again. Instead of waiting three minutes to go in, I pushed it to five minutes. So he whined and cried a bit for five minutes, and then I went back into the room and did the same thing I had done previously. I left the room and waited the third time for ten minutes. He cried and cried for ten minutes, but this time when I went in, he immediately quieted when I placed my hand on his back, gave him his pacifier back, placed the blankie in his arms, and said “shh shh shh.” When I left the room, he didn’t cry. He was awake for a bit, but he never cried again that night. He fell asleep, slept for five hours {until around 2:30 am}, I fed him his middle-of-the-night bottle, and placed him back in his crib. He instantly fell back asleep. 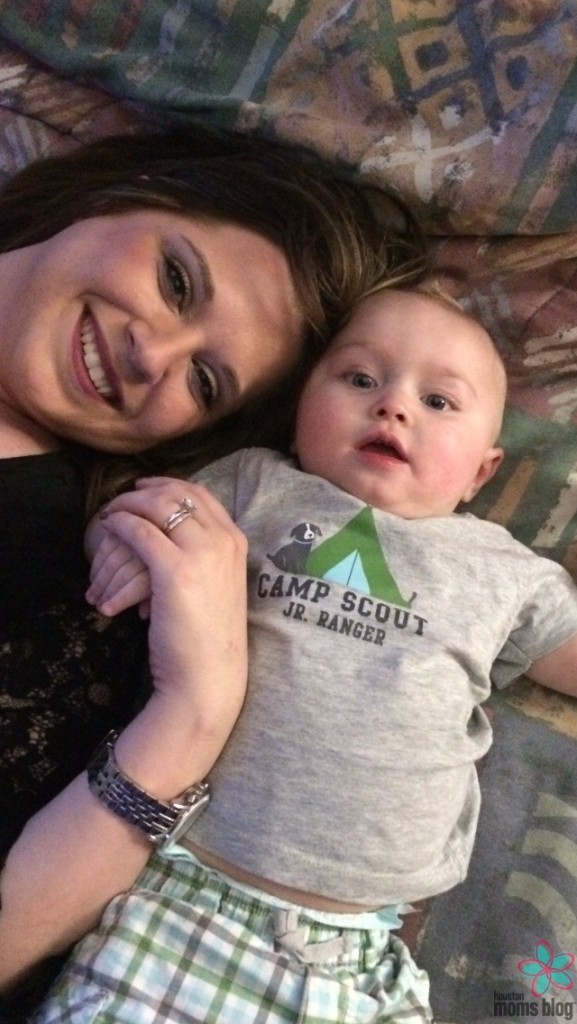 So, here we are, three weeks after we initially began the sleep training process. The baby has slept in his crib each and every single night, and my husband and I have our bed back. Has each night been easy for the little one to sleep in his crib? No. In fact, some nights are harder than others. I do not, I repeat, I do NOT deviate from our nightly routine. We bathe him, read to him, feed him, and place him in his crib at the same time each night. Sometimes he falls asleep immediately and sometimes it takes him some time. But the amount of crying he does in the crib is no where NEAR what it was that first night. He may whimper here and there, but he finds his blankie or pacifier and soothes himself and falls asleep.

I can honestly say that having the baby in his crib has done wonders for my married relationship too…aside from the obvious benefits {wink, wink} of having a baby-free bed, I feel like I am now really SLEEPING in my own bed. I no longer have to worry about rolling around and waking up the baby or worry about him rolling out of bed. I know he is safe and sound in his own crib and that makes me sleep better at night. I really miss having that time with the baby, but I know that this is the best move for my family.

Does this method work for everyone? I’m sure not. You will have to do what is best for your family and your family’s needs. My advice to you about sleep training and/or co-sleeping is do your research and ask your pediatrician for options that work best for YOU!! After all, you know your needs and your baby’s needs better than anyone!

Feel free to comment below or contact me directly if you have any specific questions regarding the methods I used for sleep training! 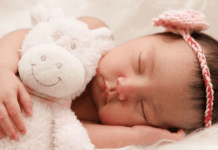 Sleep Training :: Not Just for Babies

Toddler Sleep {I’m doing it all wrong…and I don’t care!}