In a world filled with Disney Junior and PBS Kids, I love those rare nights when my kids want to watch old Full House reruns instead. So over the past few years, I’ve re-watched all the old episodes of Full House. {Including Danny’s surprise 30th birthday party. THIRTY. HE WAS THIRTY.}  And when the new series Fuller House came out last week on Netflix, I was certainly not the only person excited…

Children, let me introduce you to binge watching. Because that is exactly what we did this weekend.

In case you need a quick catch-up… Fuller House is basically an exact reversal of the original series. DJ {Candace Cameron Bure} lost her firefighter husband in the line of duty, and now she’s raising three boys on her own. So of course, middle sister Stephanie {Jodie Sweetin} and best friend Kimmy Gibbler {Andrea Barber} move in to the old family home in San Francisco to help her out.  And alas, we can’t. stop. watching. 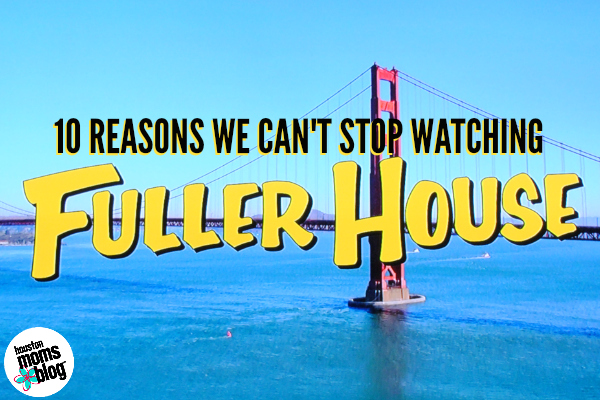 “Everywhere you look….everywhere you look…” Come on, you know you are singing it with me.  Carly Rae Jepsen’s version of the theme song is spot on. {Watch it here}. It’s modern, yet mixes in flashbacks from the old show. I also learned the words are “Evening TV” and not “HeMan TV” like I have been singing for the past 30 years. Am I the only one who got that wrong? Maybe.

As you may have heard, Michelle Tanner {Mary-Kate and Ashley Olsen} did not take part in the series. But how are they going to do the series without the beloved Michelle? “How Rude?!”, right? At one point in Episode One, the entire clan is talking about being together again and someone says, “Where is Michelle?” and then Danny says something like, “She’s off in New York running her own fashion empire.” But then they all stop, freeze, and awkwardly look DIRECTLY into the camera. For like 5 seconds. It’s awkward yet amazingly appropriate. Joey is even giving a smirk and nodding his head. Perfect. Oh, and Steve makes an appearance, and it just so happens he is single.

3} Even Comet the dog is back.

Comet’s twin anyway. The family dog looks EXACTLY like the old Comet you may remember. “Cosmo” is Comet’s great, great, great, great grandson {or something like that, it was confusing}. In the first few episodes they are debating about getting the dog which was a fun part for my child because we are constantly having the “I want a dog” conversation in our house too. One of DJ’s kids is begging her for the dog and talks about having a “toilet fish funeral” for their fish. {We have had all these conversations in our house. Claire thought it was hilarious and even quoted it later.}

4} There is singing and dancing.

And it’s cheesy. And we love it. There is a New Kids on the Block themed dance party, Kimmy finally gets to finish the Dirty Dancing twirl and the entire cast sings Jesse & The Ripper’s “Forever.” I have to admit, I was singing along too.

Those sayings you loved and probably quoted over the years are back.  You get to hear lines like – “Cut it out!” and “Have mercy.” and “Oh, Mylanta!” and Stephanie even says, “When you’re lost out there, and you’re all alone, a light is waiting to carry you home.”  It’s pure gold.

6} Kimmy and her daughter.

Kimmy was always my favorite mostly because her real life name is Andrea like mine, and I think we are the same age. She somehow still pulls off the nerdy and annoying thing, but now she also has a successful party planning business and a really cute kid! {She’s separated from her cheating husband who was really hot. You go, Kimmy!} Her daughter Ramona had to have studied Kimmy on the old episodes because she is always making faces and doing things like Kimmy used to do. It’s awesome.

Yep, he’s back too and apparently has made Uncle Joey rich. Joey and his side kick are a world famous show now. Joey masters the impressions and voices just like the old days.

This goes along with the cheese factor. But, it works. For example, they are trying to get DJ’s baby to sleep at one point, and they stand around the play pen downstairs and sing The Flintstones’s theme song. Sound familiar? Yep, the crew sang that same song to Michelle way back when. So the screen splits, and you can see the old version and the new one going on at the same time. {Tear.}

Is it just my nerdy self that loves the live TV audience? I found out Fuller House was filmed in front of a live audience at the Warner Bros. Studios in California. This really gives the series a late 80’s sitcom feel, and I just love the interaction a live audience provides.

You don’t think I could write an article about my love for Fuller House without mentioning Uncle Jesse?! His hair is still awesome, and he knows it.

You can’t deny the chemistry of these actors. I mean, they literally grew up together, so they really have this down. Fuller House embraces the cheesy, feel good, sitcom we all grew up to love.  In a world of reality TV, Presidential debates, and nonstop news coverage, it’s nice to sit down, relax, and enjoy 22 minutes of sappy, nostalgic fun where any family drama is solved by a group hug.

But really, this should be a promo for good health or Botox or something. Because darn, these people still look REALLY GOOD. 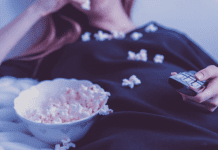 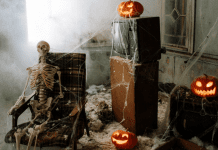 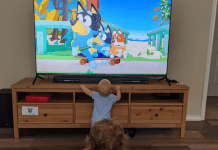