It all started as an attempt to make my husband do something that he hated. That’s how all good marriages work, right? To be fair, I never concealed my love for costuming. You see, my husband and I met on a blind date:: to a costume party. While his willingness to fully engage in my antics 23 years ago was less than 100%, I won the best dressed award at that particular party. I was open from the beginning. My commitment to all things dressing up in costumes was never in question:: there was no collusion in the making of this marriage. To that end, I claim that he chose this way of life.

When we had children, I took my costume game to a new level. I began teaching my offspring that full participation in all things dress-up was a bit like a trip to a new and distant land and it was good for the make-believe soul. They embraced mom’s ideas. 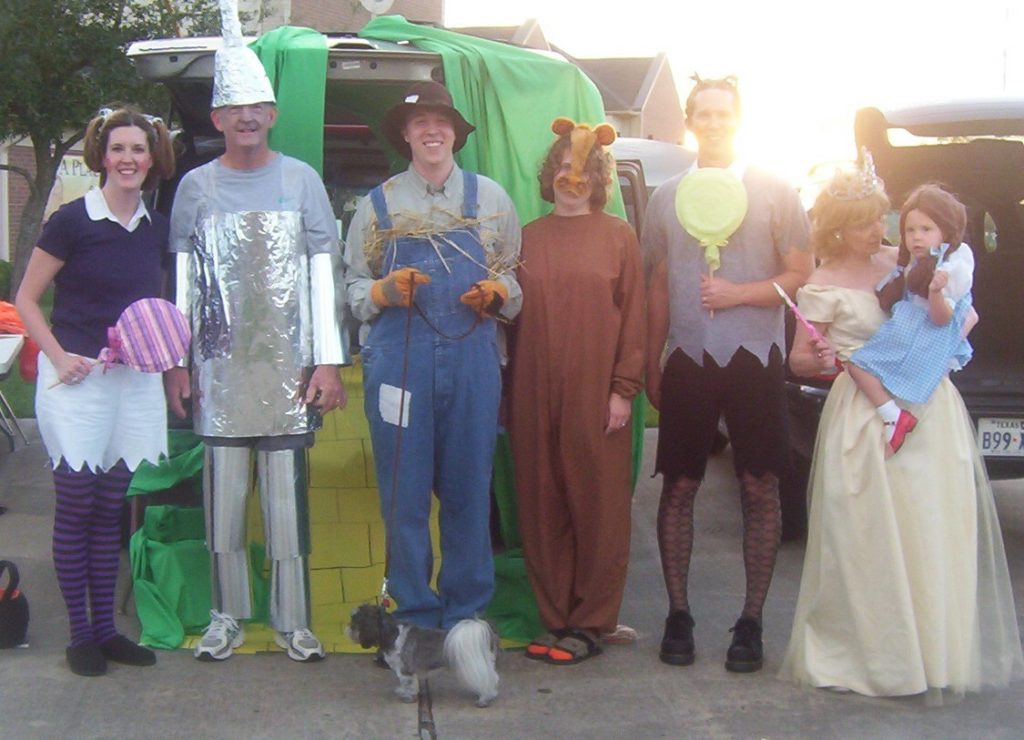 Case in point:: At the mature age of 2, my oldest and I created an entire Trunk-or-Treatthemed Oz with a wigged tiny Dorothy and her cast of 6 adults and the grandparent’s dog. {This happens when you are the first grandchild on both sides and you guilt all the people to do all the things.} The following year, we had a new addition to the family. Again, the Golden Oldest was allowed to cast the characters. The starring role went to the now, mature 3 year-old, Snow White. Dad was given the assignment of Dopey. Mom was properly nominated for the job of the Evil Queen. My favorite costume of all time is still the assignment given to the 3 month-old baby sister:: the poison apple. This theme would be continued in real life for years to come. 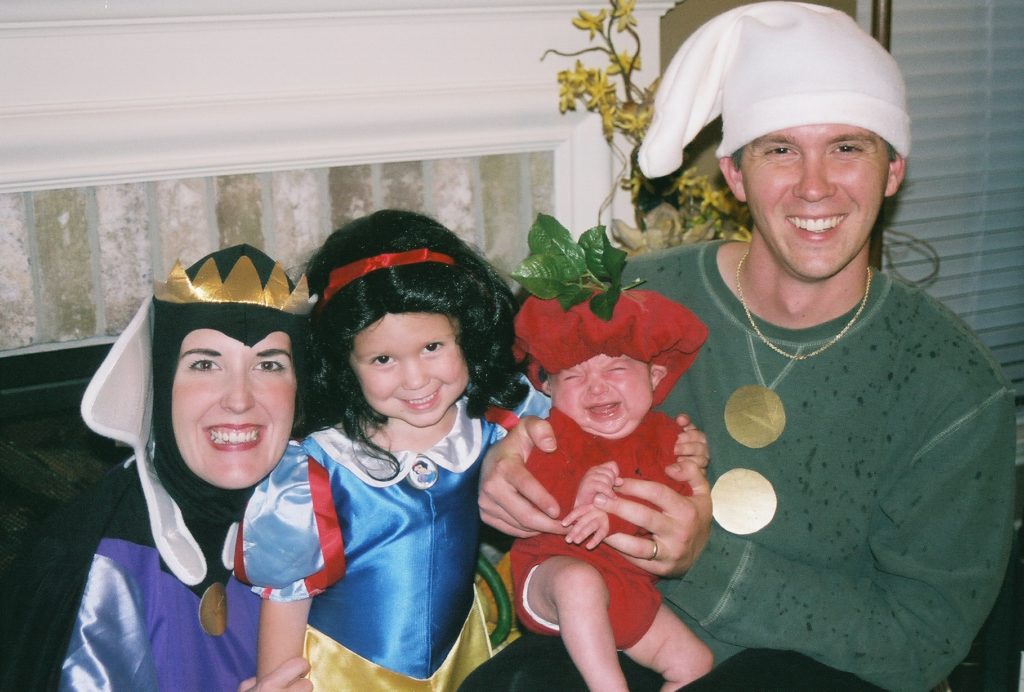 The type casting is strong in our genes. Are you ready for an adventure of pictorial and thematic delight? One important disclaimer:: this trend of family humor and costume excellence was not always executed. There were years that we just freakin’ survived. Upon arriving at October 30th, I would look at myself in the mirror and think, you really should be the Grinch this year, but there is not ONE. CARE. TO. BE. GIVEN. Take this pillowcase and go assault the neighbors in your dance costumes. Go. Be gone, crazy children.

Everything changed when we decided to co-host a Halloween Party in 2009. The kids were 8 and 4. Most of our friends did not have littles at home, so we decided to let our kids judge the adult costume contest. In my best moment EVER, my husband and I donned the costume that you see every year at the store and think who in their right mind would wear that in public? 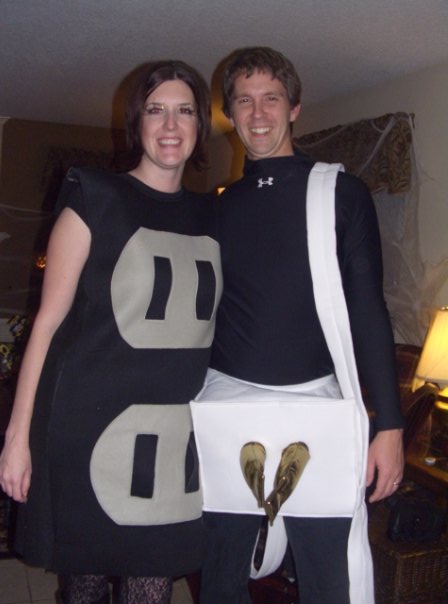 Yep. We were the plug and socket. Of course, my kids did not get the significance of this ensemble at the time, but they do now. And I laugh every time I think about it. Every single time. That’s just good parenting.

Fast forward a few years. The Halloween Party became a annual tradition. So did the excitement to prepare superior costumes. The kids began investing in the idea of group costumes – probably to prevent us from further humiliating them before God and all of humanity. The conversations began in the summer. There were heated negotiations and bribery. Some years the choices came easily and early. Others, we scrambled last minute and embraced the American consumer need to make Halloween the second most economy driven holiday. But what happened as we moved from mom-driven ideas to group think chaos was magic like I never dreamed. We became united. #TeamHilbrich {as I call our 4-person machine} was on fire to be bigger and better and more creative with every passing year. Our costumes pictures are anxiously anticipated by friends far and near. We hold the theme as a top secret until the time we walk down the stairs on Halloween night. It has become one of the best things we do as a family. 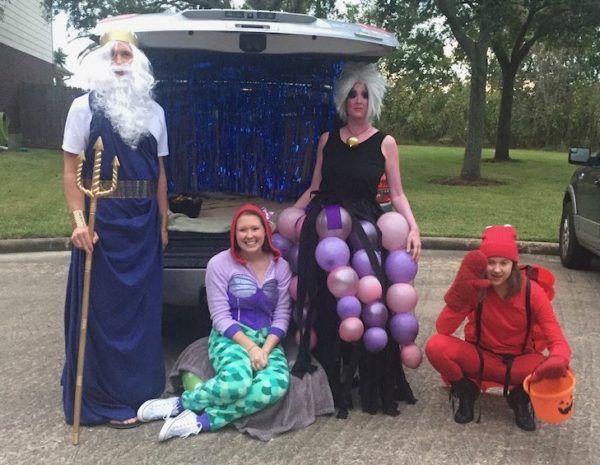 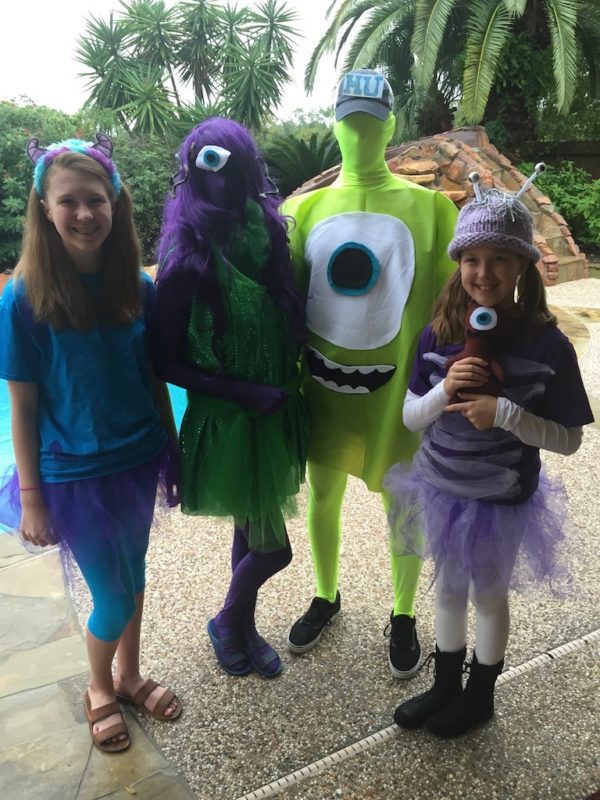 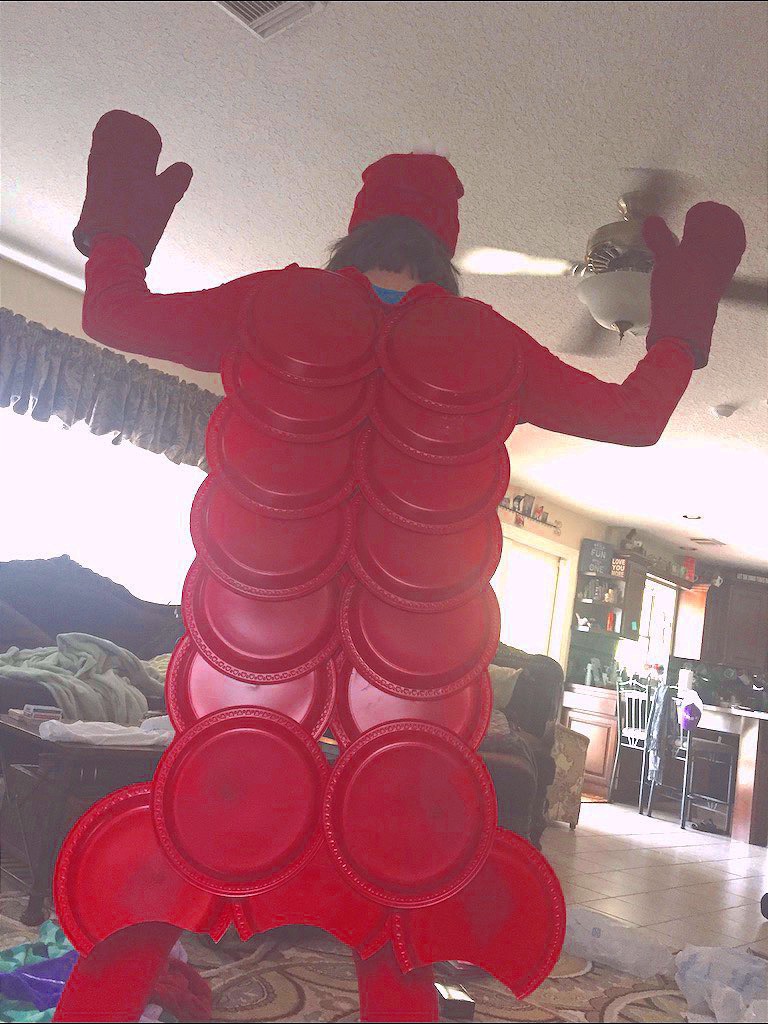 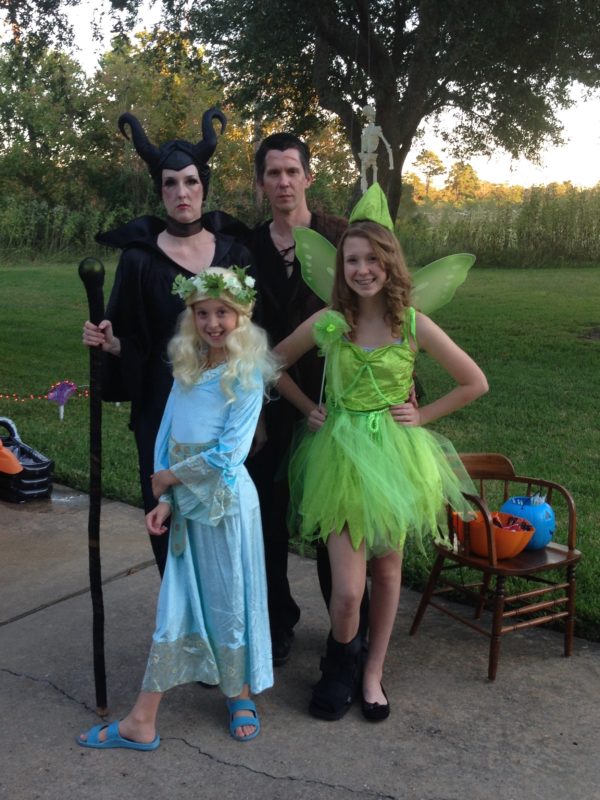 As The Seasons Change

We entered a new season last year. A serious boyfriend entered the scene and the oldest daughter wanted to include him. I’m not sure if he really wanted to play along, but the theme seemed appropriately foreboding, so he was allowed. 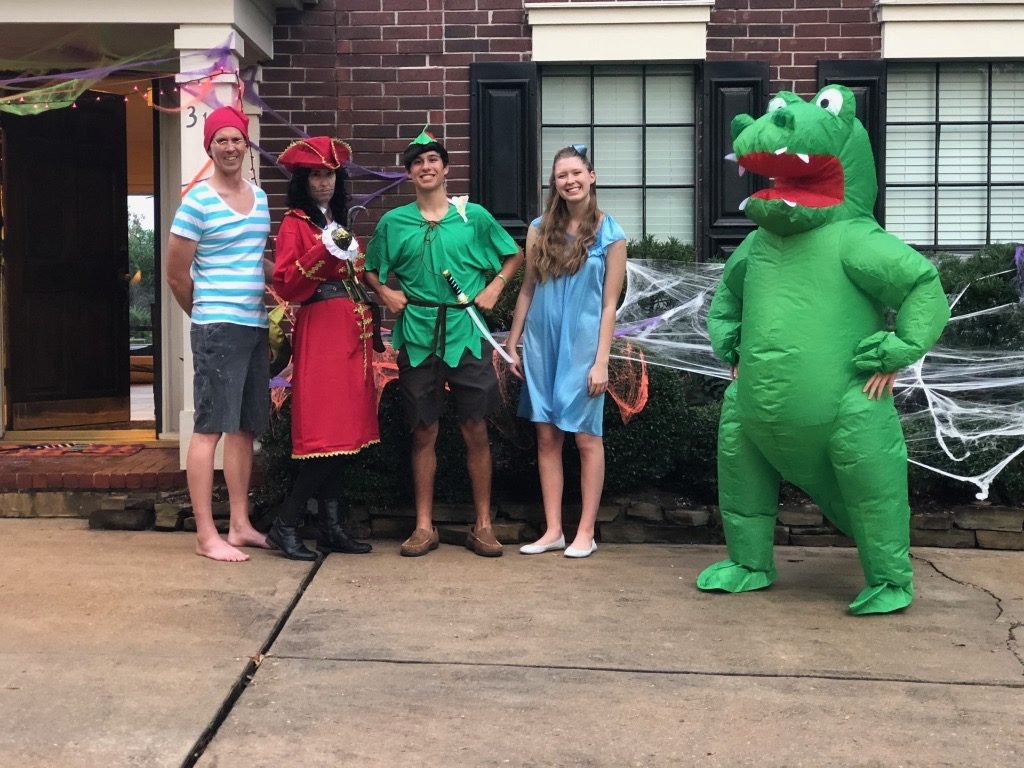 Any teenage boy willing to wear tights and have his girlfriend’s mom hold a “knife” to his throat is cool with our crazy. So, Peter Pan it was. This year, we find ourselves at a cross-road. My oldest is a senior. If all goes according to plan, she will be away at college on Halloween night next year. This may be a finale or a pause, but no matter what it is certainly the end of an era. Of course, I cannot give you the theme, but we gave the oldest final thematic and creative rights for her big hurrah. While it does not provide me the opportunity to be an epic villain, I can promise you that all of our strengths and gifts will be represented in this visual endeavor. 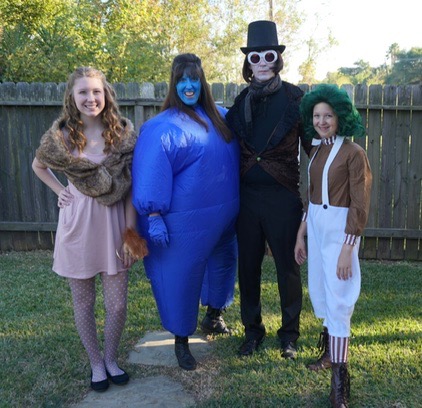 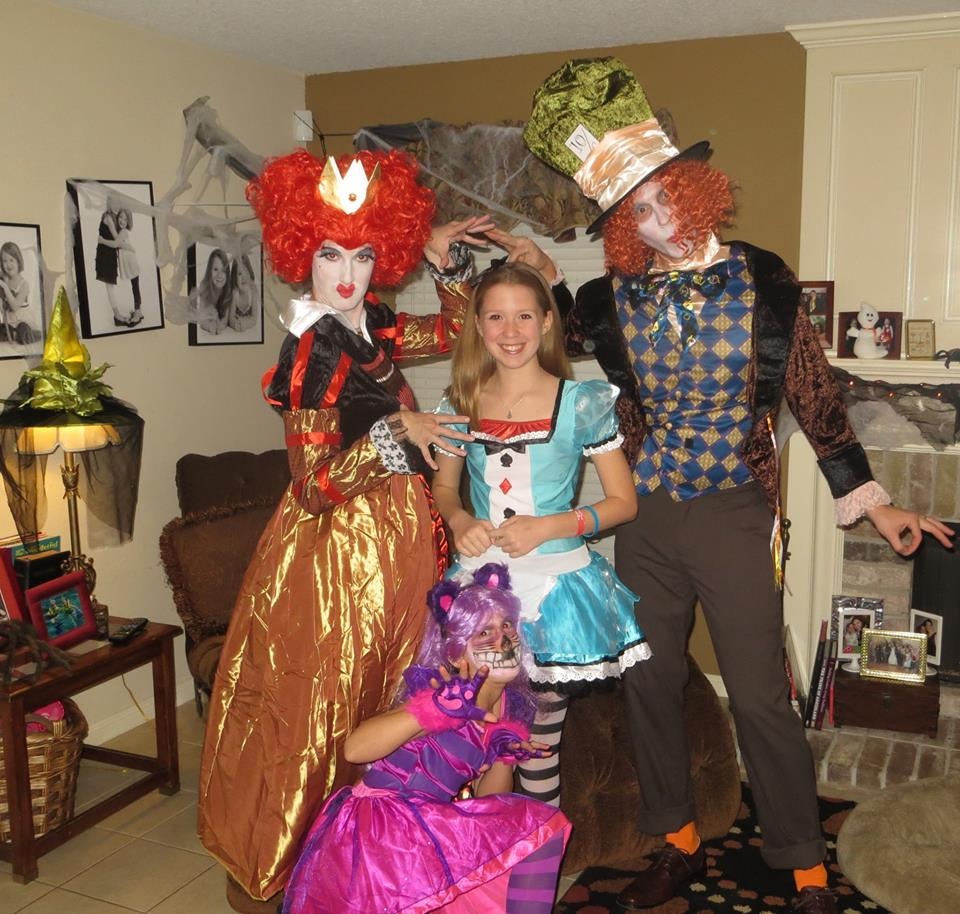 As I reflect on this tradition of family Halloween costumes, I am mindful that not every family {or husband} will grow into loving make-up and crafting and wigs. My bigger question to you is, what is YOUR thing? Not the thing that you grew up with or that your neighbors do, but what is the thing that connects you to your kids and spouse? There is power in this space of co-conspiring against the world. When we huddle up to plan the special effects and shop for the perfect accessories, we connect in a way that I know my kids will remember for a lifetime. When theses days of endless bickering and hurried school and activities are over, I want my kids to know that we were a team. We dreamed together, we fought for each other and we even conspired over face paint and blow up suits. They will never see Johnny Depp as the Mad Hatter and not think of dad on his bike. They will never see The Little Mermaid and forget the endless red plates. These moments remind me that I win at parenting.