I’ve always loved writing and keeping up with current events. I watched CNN as a kid and made my little sister do radio shows with me using a cassette tape recorder. So, when it came to decide what I wanted to do for a career, it wasn’t that hard to narrow it down. {Did I also mention I like to be in charge of things?} Yeah, so writing for the news and being a producer was a natural fit for me. I didn’t know when I was 18 years old but choosing this career made all of the difference years later when I became a mother.

Just out of high school and dreaming big, I showed up at a little TV station in Beaumont, Texas on a recommendation from a friend and asked for an internship. They didn’t do that, the news director told me. I suggested maybe they could start and I would work for free? Nope. Then, a few weeks later the news director called me back and asked if I knew how to edit video. {um, yes?} So, I showed up, was given a 5 minute lesson and then hired to be the editor for the morning newscast. My shift started at 3:00 am and I think it paid minimum wage. I was in heaven.

My college life consisted of me not sleeping and waiting tables to make extra cash. I eventually started producing the morning show which meant my shift was midnight to 8:00 am. Lucky for me, I met a new friend named Elizabeth who had insomnia and knew every episode of Saved By The Bell by heart. She would call on speaker phone and keep me company, often reciting lines from the most popular shows… {“I’m so excited! I’m so excited!! I’m so scared!!!”}

So, what does a Producer do?

I can’t tell you how many times I have gotten this question. For those who don’t know, a TV producer is in charge of basically every element of a newscast or show. They decide the content, the order the content will go in the show, and how will be presented. Producers keep up with the reporters and writers and lay out the plan for the production crew to put into action. Bottom line :: There are a lot of balls in the air all the time. There is no deadline extension, there is no such thing as writer’s block. The news starts when the news starts – no excuses – and it happens like that day after day. You have to have a backup plan for the backup plan. It’s high pressure, high adrenaline, and a whole lotta fun.

I worked in several markets around the country and finally landed in Houston, Texas. After saying I would probably never get married and certainly never have children… I found a great {and good looking!} guy who loved Jesus, knew how to cook, and was taller than me. So, obviously we had to get married. He also put up with me telling him things like he had 30 seconds to get to the point of his story. Yes, I actually told him that when we were dating. {eek.. seriously, Andrea??} 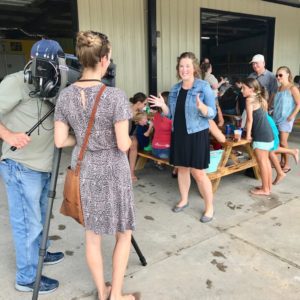 To my shock, years after marriage, I became a mother. {I’ve shared here before about how I never wanted to be a mom, until I was one.} Transitioning to motherhood was not a natural or easy thing for me. I’ll never forget that feeling I had after several nights of no sleep. It’s like you are in a fog and a dream all at the same time. You don’t know what day it is. You haven’t showered, you eat around the clock, or you don’t eat at all – everything is just out of whack. This feeling of pure exhaustion was something I had felt before. I was taken back to those days in college when I was working full-time overnights.  I taught myself how to nap on command. I could literally lay my head down and go to sleep in less than 45 seconds. It’s this learned skill that helped me survive those first months of motherhood. As a TV producer, I had all of the “what if’s” covered at all times. These constant backup plans running in my mind put me at ease when I would often sit and worry about my baby and all the possible things that could go wrong.
I eventually moved from the high pressure world of live TV news into producing Special Projects where the schedule was more flexible and there was more time to be creative. Now years later, I am a freelancer, getting to do a little bit of everything I love in the business.

I do not take for granted that I have a career that I am passionate about. From handling exhaustion, to multi-tasking to having a plan for everything, it seems my career really did help me figure out how to be a mom. It’s funny how life prepares you years ahead for things that are coming down the road. Thanks God, I couldn’t have produced it better myself.