Our home is 100% pro-Santa Claus, and our Santa game is strong! When the kids came home from school to tell us that a kid said that Santa isn’t real and his parents are the ones that buy the gifts, we were ready. “Well, if he doesn’t believe, then OF COURSE his parents have to buy his gifts.” Duh!

The year my oldest sold his first tooth to the Tooth Fairy and sobbed with regret, Santa was the one to barter with the Tooth Fairy to get it back to him on Christmas morning. We even let one of Santa’s elves into our home {If you haven’t done this yet, DON’T! It’s a trap!}, and that elf went so far as to steal our car and drive to Wendy’s for a midnight snack one night.

In fact, our Christmas magic game might be a little too strong … because we found ourselves with a 13-year-old who still believed {to some extent}, and it was becoming exhausting to keep upping our magic game to impress a teenager! We also had a high-needs baby at home who required my presence around the same time my oldest went to bed which means the window for magical hijinx had closed considerably.

The intersection of those two issues meant that the time had come to tell the truth to our oldest and recruit him to the grown-up side of things!

Once we decided it was time, we had to figure out how to tell him. We suspected he knew the truth on some level, but we needed him to know the whole truth so he could become one of Santa’s helpers. As I mentioned above, we really love our Christmas magic, and the thought of that coming to an end, even for one of our kids, was difficult. How would he react? Would he be mad about the years of deception? Would he be sad that we told him? How could we tell him gently without ruining his childhood memories?

It was important to us to preserve the magic in some capacity and acknowledge that while things may not be exactly what they seem at Christmas time, that spirit of magic is a real force. It is the force that compels moms and dads to stay up into the wee hours of the morning building toys and trampolines and setting up treasure hunts and filling stockings, even when they know they will have to be up long before dawn. It is the force that convinces us that having the elf spray silly string all over the living room in an epic battle with Buzz Lightyear, or dump flour all over the floor for snow angels is a GOOD idea, because goodness knows this mama would never do those things on her own free will.

This is the true heart of Christmas magic: if you believe in Santa {and we do!}, he really does visit your home and fill it with magical moments! He just enters the house through our hearts and not through a chimney, and he works with our hands instead of his own. In the spirit of passing that knowledge down to our son, our elf brought him this note upon his return that year…

I’m BAAAAACK! And I have a very special mission for you this year. As you may have suspected, my special abilities and adventures require a highly specialized magical combination of belief, creativity, and teamwork. In previous years, your only task was belief, but this year I need your help with creativity and teamwork! You see, I cannot go on my magical adventures without help. For the past several years, your parents have been my special helpers, planning and executing my missions, but this year, now that there is someone new in the house, I need your help to make my magic even stronger! It is a big job, but I think you are up to it! I have even negotiated a later bedtime with your parents to make this happen, but only if you put in good effort!! I look forward to all the adventures we will have together this year and remember, this is for your eyes only! Don’t tell your sisters! Welcome to the FUN side!!

Yours in magical hijinx forever,

I was so nervous about leaving that letter for him, but it went over really well and there were no hard feelings. Although Santa wasn’t mentioned specifically, he knew it spoke to the truth of that magic, too. It was fun to have him on our side of things, and he enjoyed helping us with surprises for his sisters.

We are once again approaching this pivotal moment with our middle kiddo {age 12} who still believes wholeheartedly, and it has been nice to be able to ask his input on when we should break the news to her. He said we should give her one more year and tell her when she is 13, just like he was. I’ll take that as a sign that we did something right! 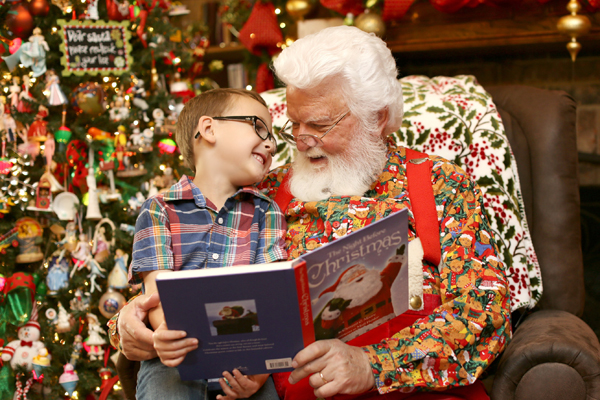 {And now, for one last piece of advice… DON’T let an elf into your home! Seriously!}