Goals. I have filled my life with goals. Motherhood was no different, so I made goals including taking a shower within 24-ish hours of having the baby, brushing my teeth before noon while on maternity leave, and breastfeeding my baby for her first year of life because breast is best. Seems simple enough, right?

Wrong. I failed my breastfeeding goal.

What?! What is this failure business? All my life, if I set a goal, I met it. In fact, I exceeded it. {To all my Type-As, do you feel me?} I always believed that if you wanted it badly enough, you could do it as long as you worked hard at it. And I was led to believe breastfeeding was just another one of those things that fit the motto, “if there’s a will, there’s a way!” In Lean In, Sheryl Sandberg wrote about how she was able to continue pumping on conference calls. So-and-so on Facebook filled their deep freezer with breast milk by the time her son was 5 months old, and she had already returned back to work. Plus, my mother, my biggest hero of all time, breastfed all four of us, and clearly, we are all geniuses {sarcastic hair flip} so I have to follow in her footsteps. If they could do it, so could I!

Breastfeeding during the first half of the year was fine when I took an extended maternity leave. My daughter was around the 90th percentile in height and weight, and was a round, happy baby. I even had a nice frozen supply in the freezer. Meeting my breastfeeding goal of a year seemed completely doable. 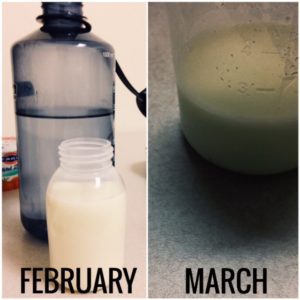 Then, I returned back to work and another piece of humble pie was served. {The first serving was the fertility journey.} Within a month, my supply started to dwindle. In the beginning, I was bringing home 12-15 oz of expressed breast milk from two pumping sessions {20 minutes, once in the morning, once in the afternoon}. I soon noticed that the bottles were getting less and less full each week. By the time my daughter was about 8 months old, I could consolidate all expressed breast milk from the day {about 5 oz on a good day} into one bottle.

This was the first sign that I was not going to meet my breastfeeding goal, and I started to have all the feels.

I started to worry about how my baby was going to eat, build her baby genius brain as well as her immune system and lower her risk for allergies*. My husband and I even spent an evening calculating how many ounces of frozen breast milk were left in the freezer and how long it would last based off her daily intake.

I figured my supply drop was attributed to dehydration. After properly hydrating, there was still no improvement, so I figured I just wasn’t doing enough to encourage my production. After hours of scouring the Internet, I gave oatmeal and Mother’s Milk Tea a try.

The milk production interventions didn’t make a big enough difference with increasing my supply. Then, we found out that we were expecting our second child… which was a huge contributor to my diminishing supply. I finally surrendered to the end of my first born’s breastfeeding chapter. During my daughter’s 9 month check-up, I asked the pediatrician for formula samples to supplement and felt so defeated. With the first scoop of formula, I thought, “How did this happen? How am I unable to provide sustenance to my baby? How is it possible that this special bonding time has been cut short? I feel like my daughter is being robbed because my body has failed, and I won’t be able to tandem breastfeed. “ {I know.. I was trying to concurrently sustain 2 other human lives – 1 inside my belly and 1 on the outside. There’s no reasoning with a mother who has blindly set on a breastfeeding goal.}

I was still attempting to exclusively breastfeed my daughter on the weekends. We noticed a pattern. She would be happy during the week, but miserable, fussy, and cranky on the weekends. I thought it was a mental leap, but the pattern didn’t make sense. My husband suggested that we try bottle feeding her on the weekends too because maybe she was hungry. When he said that, it all came together.

And my husband was right. Baby girl was so much happier once we bottle fed her through the weekend. I couldn’t believe my supposed determination was actually my ego getting in the way. It was my goal to breastfeed when all my daughter needed was proper sustenance, regardless of the source. I was putting my desires ahead of my daughter’s basic human need for food. Feeling this shame really snapped me out of the guilt and sadness.

We made it about 10 months with breastfeeding. Even if I wasn’t pregnant while nursing, I would not have made it to a year. My body didn’t respond all that well to the pump after I returned to work. For the remaining 2 months of my daughter’s first year, we used my remaining frozen stash and supplemented with formula as well as donor milk from a couple of amazing moms {who I knew were very healthy and disease-free. God bless all the donor moms out there!}.

Once I was over the guilt and sadness, I shared with other moms what I was feeling about the end of breastfeeding. I thought I was in the minority, but in fact, most of the women I spoke with empathized deeply because they also did not make it to a year with breastfeeding. In fact, there’s data to back-up those anecdotes. According to the CDC, in 2011, 49% of US children received some amount of breast milk at 6 months old, and the numbers for exclusively breastfed babies were even lower at 19%. I was beating myself up for being in that 19%, rather than celebrating it.

I cherish the privilege I had of breastfeeding my daughter for a good amount of her first year. I felt a special bond that I knew was very temporary in her life. I saw smiles, heard giggles, and felt embraces that no one else will experience. However, I wish that the motto of “breast is best” came with the caveat of “…as long as it’s humanly possible”. I do not cherish the desperate attempts to encourage breast milk production, nor do I cherish the tears I shed in the Mother’s Room at work after only producing 2 oz. The immense pressure of meeting any sort of breastfeeding goal can be damning and make us forget about everything else we have going for us. It can turn into an unhealthy obsession.

To my fellow mothers who are reading this while pumping or nursing, or are waiting for the next round of feeding – way to go. Keep up the good work! But if you’re having a hard time doing something that’s supposed to be so natural, you’re not alone! Remember to be kind to yourself. You’ve done your part of nurturing your child and there’s only so much you can do. Remember that genetics take over and also influences the trajectory of your child’s health and intelligence. It’s not all on you. So if you are unexpectedly scooping some formula into that bottle, it’s okay. You’re being a great mom for putting your child’s needs ahead of your own desire of meeting your breastfeeding goal.

*Post-script: Studies suggest that breastfeeding can help prevent development of allergies in babies. Well, my daughter officially has allergies to peanuts, milk, eggs, and shellfish, even though she primarily had breast milk for the majority of her first year, and there are no food allergies in the family. Amazing what biology already had mapped out for her regardless of how we nurtured her. Food for thought!

In honor of World Breastfeeding Week 2015, it is our goal to raise awareness and shine a light on the many ways to feed and nourish our little ones.  Our goal is to inform and inspire, so join us as our team opens up and shares their personal stories of both the struggles and triumphs of breastfeeding.  To read more, please click here.