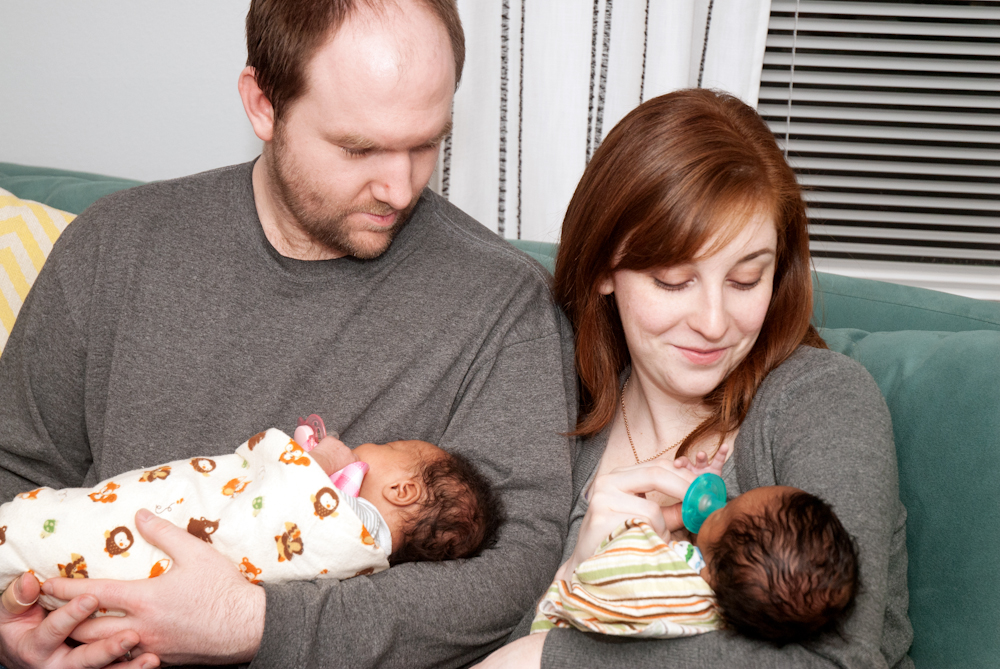 I was having a conversation with an older, 70s-aged gentleman who was sitting in our office waiting for a meeting. The conversation was casual. The topics didn’t go much deeper than the “how-about-that-weather?” jabber. Then someone mentioned to him that my twins were adopted. His reaction was incredibly sweet. He asked how old they were, asked their names, whether they’re walking and talking. The usual.

“And…you adopted them? You’re a hero for bringing them into your home. They’re lucky to have you.”

Those three words, “You’re a hero” sat uneasy with me. Like a medal he was giving me that I didn’t deserve. He knew nothing about our story and how our kids came to be a part of our family. He simply made an assumption based on the fact that my children aren’t biologically mine.

If he had been a friend who said that to me while talking over lunch, I would have pulled out all of the feelings from that statement and politely poured them out on the table. I would have graciously made him aware of more appropriate and positive adoption language to use. But the surface-level conversation with this gentleman didn’t feel like an invite to pull out the counselor’s couch to talk about all the emotions and thoughts those three words “You’re a hero” brought to my surface. I knew his intentions were sweet and innocent, and I probably would never see him again – so I spared him all the feelings.

I was polite. “No sir, I’m not a hero for that. Thanks though. I appreciate your sentiment. I’m just a mom like every other mom.”

We smiled, and he was on his way two seconds later, oblivious to the deeper discussion his well-intended compliment warranted.

Since this grandfatherly gentleman and I weren’t friends talking over lunch, let’s pretend that you and I are enjoying a meal together. We’ll be buds, and I’ll share all the feelings with you that his comment splattered all over my heart…

First, I’m not a hero. I’m just a mother who found a different way to her children other than the traditional biological route. I’m a mother whose children were birthed, not from her womb, but through the miracle of adoption. Yes, parenting adopted children has specific aspects that we must be sensitive to as adoptive parents. But being an adoptive parent doesn’t make one a hero.

Second, I didn’t “bring them into my home” like stray cats. My children obviously aren’t cats. Let’s get that out of the way. We brought them into our home because that’s what parents do. When a woman births a child, she brings the baby home. We don’t look at that biological child and think, “She’s lucky her mom took her in.” Why should adoption be any different? The only difference is the route to becoming a family. Adopted children deserve the same respect as biological children in that their family brought them home because that’s what parents and families do.

And I get what some people mean when they say, “They’re lucky to have you as parents.” I always wonder about the motives behind this statement. When this comes from people that really know us and know the type of people that my husband and I are, I assume they say this because they think our made up silly songs, intentional connections with our kids, or nightly dance parties makes us great, fun parents. They’ve seen our parenting from the front row.

However, I’ve heard “they’re lucky to have you” from strangers in line at the grocery store. Our interactions are simply eye contact. They don’t see my day-to-day parenting at work. They know nothing about me and are only making an assumption because they see that my children are adopted. So saying “they’re lucky to have you” based merely on the fact that I adopted my children can come across to my children as saying “you’re lucky someone wanted you.” My children are only 15 months old right now, but can you imagine saying that to a child who has the ability to grasp what that means? It could make them feel damaged, unwanted, or unloved.

The fact is, I’m lucky to have them and we’re lucky to have each other – that is if you want to use the term “luck.” I prefer “blessed.” I’m not a hero because I brought them into my home. All moms are heroes. Period. Because they are raising little humans to hopefully someday become wonderful bigger humans who will make a difference in their world around them. It’s a tough job. Hats off to you, moms.

Just like a child that is birthed into a family belongs, so does an adopted child belong into the family in which they are placed. The only difference in our family is genetics. I’ve never looked at our adoption as us being saints in raising children placed for adoption. Viewing adoption as “saving a child” creates a hero complex. Which makes for very dangerous parenting because adoption is viewed as salvation. That perspective cripples a parent to be able to walk along side your child in any grief and loss that accompanies them from being adopted. Portraying yourself as your child’s “hero” to them {or anyone else} does not give them permission to feel the legitimate emotions that arise from their adoptive experience. And as parents, we want to be able to walk with our children through whatever joys and heartache they may experience in this life. Right?

I’m raising my children because they are my children. Not because I’m a hero, or wanted to bring stray children into my home, or because I feel like they’re lucky to have me as a parent, or because I wanted to save an orphan. I didn’t decide to put on a white hat, jump on my trusty steed, and happen to scoop up these twin “orphans” to nurture, secretly hoping to be recognized for my selfless act.

I just wanted to be a mom. I wanted to raise a family. I wanted to love. And adoption is how that happened. I’m just a mom with two incredible little people to raise. A mom who, just like every other mom out there, has baby food splattered on her floor and who worries about whether or not she’s doing enough to help her children thrive. And what an honor it is to me to be a mom through the miracle of adoption.