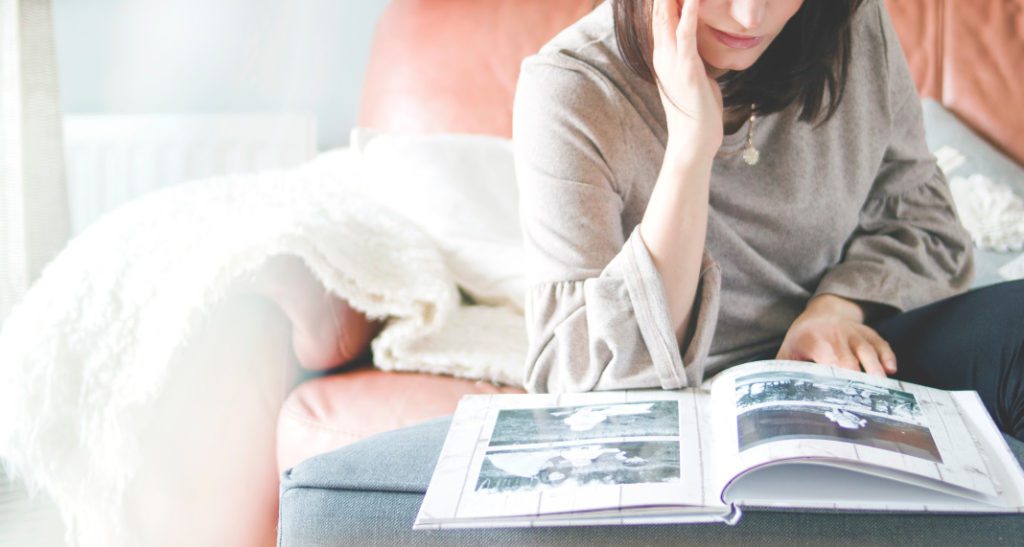 I sent my teen-aged daughter the proofs of pictures that were taken as she accepted her diploma during her recent graduation ceremony. I asked her which image we should buy. Her response, “None. They are horrible.” Yes, her smile looked a bit unnatural and her hair a bit tousled, but they were not “horrible”. I sighed, closed my laptop and glanced over at the photo album sitting on the corner of my desk. This wasn’t just any photo album. The faux shiplap cover holds pages and pages of pictures I once thought were “horrible”. I thought that because those pictures were of me.

The notebook was somewhat of an assignment given to me by my therapist after she had spent her hundredth session defending me from my own self criticism.  She told me to find a picture of myself for every year of my life. I cringed because there were years I would have liked to forget. Luckily, my mother dropped a big box of my life into my lap a few years go. I had boxes of school certificates, interest art pieces and an array of pictures that reminded me to be thankful for straightening irons.

It was easy to find pictures that I loved of myself between the ages of birth and seven. Then, I could feel myself starting to wince at pictures of my attempted pixie cut when I was eight {naturally curly hair and a pixie hairstyle is difficult}. My body image plummeted in my early teens and never really recovered. All those negative feelings came rushing back, but I kept positioning the pictures on to the photo album pages till I reach my current age, forty-one. Taken just a few weeks before, it was a picture of me as I left for my first day at a new job. I remember after my husband took it I rolled my eyes and said, “Blah, my hair is a mess and I look so old.”

I flipped through the completed book and realized things were not as bad as I remembered. My appreciation for the book {and the exercise} grew with every page turn and I learned some valuable lessons.

I should have enjoyed that metabolism while I had it

Spending time with the pictures taught me that I was never as overweight as I believed I was in my late teens and early twenties. Sadly, I lived a good decade {maybe two} in a life of fad diets and attempts to get just a dress size smaller. Today I don’t see weight in those pictures, I see a beautiful young woman {with really good skin}.

Time helps you appreciate what you were born with

I hated being a redhead when I was little. It took me many years {and many ill-fated hair dyings} to realize the beauty of the dark auburn red locks I was blessed with at birth. Though it could be unruly at times I had amazingly thick curly hair that I would love to get back today.

Even the cringe worthy pictures are memories of important things

Yes, that vest I wore in my sixth grade school picture may look like it was cut out of a sofa, but grandmother made it for me. My grandmother was such a huge part of my life and I now count myself as lucky to have many school pictures in outfits she created. There are pictures of me moments after giving birth to my first daughter. The first time I saw them {18 years ago} I wanted to burn them, but now would not trade for the world.

So, as I glanced across my desk at my album I knew I had to buy the “horrible” pictures because I knew that twenty years from now she will not care that her smile was a bit askew. Those pictures marked a very important milestone, an event that will not be repeated. I knew that she would someday she will grow to cherish them as I cherish mine and she would see just how beautiful she really was in that moment.