Moms have LOTS in common.  But maybe none more than the fact that we want to protect and keep our babies safe.  It’s innate.  It’s what we do.  Don’t even try to get in our way.  Or TRY…and see what happens.

Lately, I’ve encountered the same DANGER over and over again in my part of Houston.  A danger that threatens myself, but of more concern to me than anything…MY BABIES.

Notice I didn’t say DOGS.  Nope.  I’m not a dog-basher.  I happen to love dogs.  The danger, in my opinion, lies with HUMANS who let their dogs run free in neighborhoods, parks, and on city streets.  I have HAD it.  And I know many of you have too.  I’m tired of having to loudly yell “NO!”, tired of having to hastily whip my 1 and 2 year old  into my arms, tired of being chased, charged, growled at and having my ankles nipped at.  All because a dog is NOT LEASHED.  But perhaps my favorite part of all of it has to be that good ‘ol negligent dog owner who is usually close by – yelling at you {as their dog is charging you!} not to worry.  That their dog would never bite.  Or don’t be scared.  Or here’s the best one I’ve heard, that YOU are scaring THEIR DOG by jogging by or by shouting at it as it runs at you.  Ah yes, I LOVE when the negligent dog owner tries to put the blame on YOU.  Are you freaking kidding me?!?!

PEOPLE…I have two words for you. 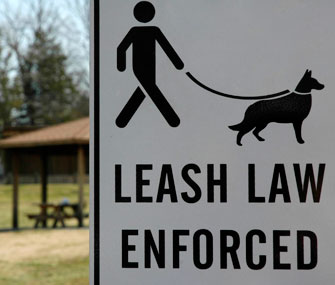 Let’s raise awareness.  Refuse for you and your children to be a dog-attack statistic.  Lord knows we’ve seen enough of them on the news as of late.  Don’t hesitate to call your local police department the next time it happens to you.  You are covered by the law.

From the Houston Department of Health and Human Services ::

When animals are not on a leash they must be otherwise restrained, either behind a fence or in some other enclosure that will prevent their escape.

“Running at large” may result in impoundment of the animal or in the issuance of one or more citations.