There’s a room in this place that holds a piece of my heart. It’s the room where I left my middle child on his first day of kindergarten, sitting at a tiny desk, ready to start the rest of his life, while I walked out the door entrusting him to the hands of a woman whom I would eventually come to regard as the most amazing teacher I’ve ever known. 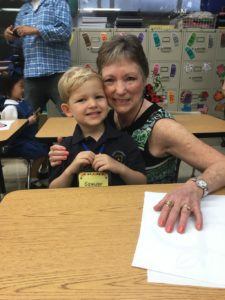 I left him there each morning, walking him through that door into the welcoming sunshine of a classroom filled with opportunity and hope and the blessing of seeing the world with a Christ-centered focus.

I picked him up there each afternoon, backpack dangling over his shoulder, greeting me only after giving her a “ticket” {her hug} at the end of a long day of new beginnings.

And in watching his world expand within the walls of that classroom and his barriers break down and fall away through the discipline and encouragement of Ms. Winkler, I slowly recovered from the fact that he was no longer mine alone, that he was getting older, that I needed to let go at least a little…

That it was okay to let go of him, with that teacher, in that classroom.

He stepped out into the world and started on the path that will be his life and I learned how one person can truly change the world one soul at a time, year after year, within the walls of a classroom.

We said goodbye to that wonderful teacher a few weeks ago, as she left the world of teaching to enjoy a well-deserved retirement. 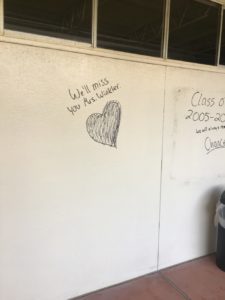 And that classroom was filled with several feet of water in hurricane Harvey last August and will be torn down this summer.

I opened that door one last time…for the first time since the flood. The creaking sound was familiar as was its heaviness as I pulled it open. I remembered opening that door for my boy in the morning, often frazzled and later than we meant to be. And I could see his friend standing at the door, waiting to greet him by name with eye contact and a handshake, as Ms. Winkler had taught them.

I flipped on the light and looked around at the room with its empty and torn out walls and its pile of debris in the center. The shades were drawn over the windows that filled the back wall and had let God’s glorious light in to shine on these babies while they learned. All the signs of childhood and wonder and alphabets and colorful pictures that lined the walls were gone and drawers and wood and flood-damaged books filled the center of the room.

There was a big, fat, loathsome pile of debris to remind us that all of this will just pass away. 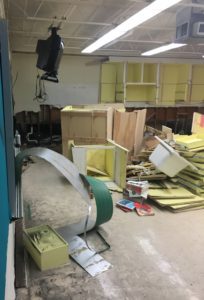 And I was sad and angry all over again about all that was lost, all that was taken from us by that storm, and all that we were forced to say goodbye to before we were ready.

Life moves on. Homes are rebuilt. People slowly start to fill your street once again. And you think you’re fine. You think it’s all fine.

Until suddenly it’s not.

But standing in the destruction of that classroom, surrounded by wisps of memories swirling around me in contrast to the backdrop of the empty walls and destruction I now see, it could not be more clear that the magic in this classroom had everything to do with the laughter that filled it and the love that governed it.

Aside from the tributes of former students that lovingly decorate these walls in a final salute, there is nothing left that says, “Love was taught here.”

That lives on in a place that can’t be touched by hurricanes or floodwaters or bulldozers…in the memory of a teacher who formed a generation of students, and a little blonde boy who was as transformed as the tadpoles and caterpillars under Ms. Winkler’s watch…and the little boy’s mother who will remember the weight of the door she left her baby behind each morning.