Earlier this week, I opened up my heart and shared my story of how I became a mother.  This is a continuation of that post and an effort to share hope and spread awareness about Congenital Heart Defects {CHD}.

Be sure to read part one to catch up, but remember that while I was pregnant, my son was diagnosed as having an aortico-left ventricular tunnel which meant there was a tunnel that leaked blood back from his aorta into his left ventricle.  Remember we were told that Texas Children’s Hospital had never seen this condition before or they had ever repaired this defect before.  That was definitely not something that this mommy heart wanted to hear.  The pediatric cardiothoracic surgeon we met with assured me at 20 weeks gestation that he could indeed fix my baby’s heart, but only if I could get my baby here on this earth at a weight suitable enough for open heart surgery and stable enough for intervention.  His words still, over three years later, ring loudly in my ear, “I can fix your baby’s heart; that’s not the problem.  The problem is getting your baby here.”  Most of the doctors feared that Preston would develop hydrops fetalis and heart failure which carries a mortality rate of over 90%. 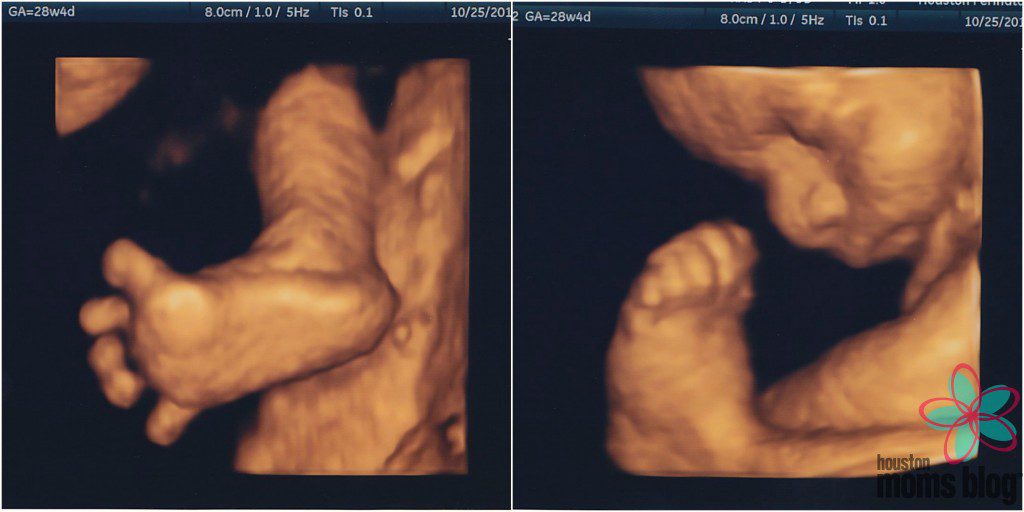 Miraculously though, Preston was born on January 4, 2011 at 38 weeks, free of heart failure and with no signs of hydrops.  He was full term and a surprising 6 pounds and 13 ounces – I did my job of getting that surgeon a full term and good size baby.  I give my God all the glory for that.

Preston looked so perfect on the outside.  Ten little toes, ten little fingers, blue eyes that were already turning brown, gorgeous pink lips, and breathing on his own.  Inside though, his little heart slowly started working harder and harder, his diastolic blood pressure was dropping, and his breathing was becoming a little more labored.  It was hard to notice, but the nurses, doctors, and residents could slowly see changes occur as could I {I’m a PA by day}. 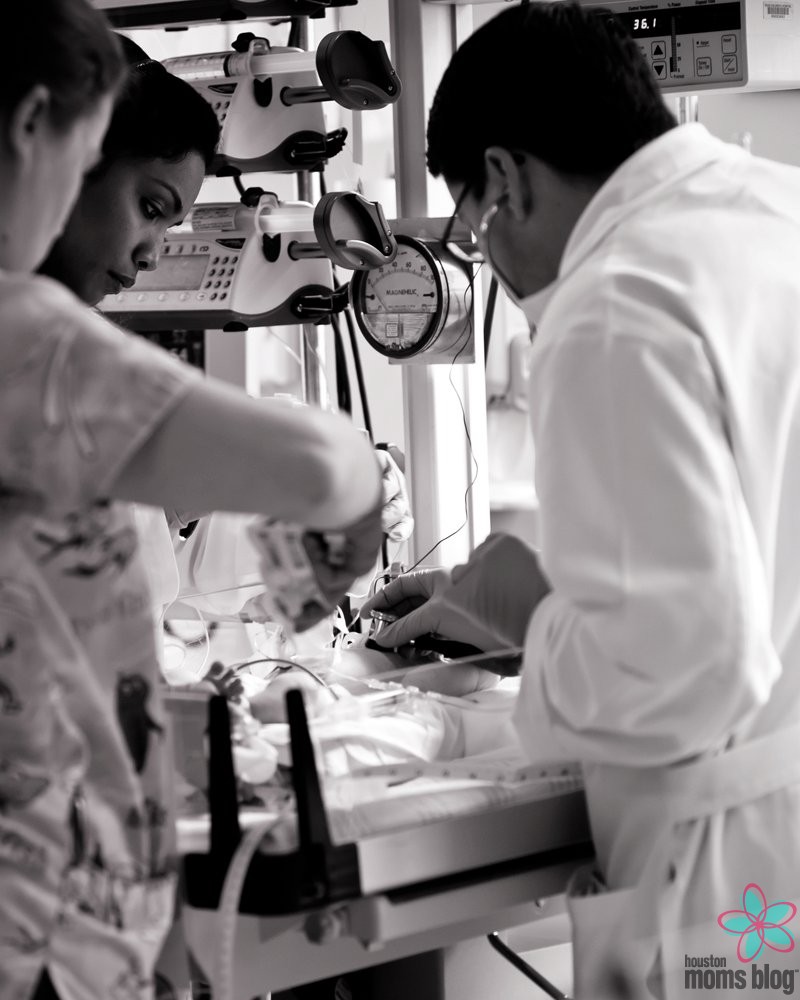 Sure enough, when Preston was just two days old, his doctors announced that he would need open heart surgery the very next day when he was just a mere 36 hours old.   They called it the “calm before the storm” and said it’s always wise to schedule a surgery when things are calm.

Surgery was scheduled for 8am on Thursday, January 6, 2011. I’m still not sure we slept at all that night before his surgery.  We woke early on the morning of the 6th so we could get over to Texas Children’s CVICU {I was still in the hosptial as a patient at St. Luke’s across the street} to spend some time with Preston before his surgery.   I prayed over him as I held him, my tears a constant drip on to his little body.  I stroked his perfect chest, knowing that I would never see it that way again.  My aunts were there in the room with my husband, Preston, and myself.  They took pictures and videoed those precious moments for us.  Still to this day I can not bring myself to watch that video – mostly because I hate to relive that moment as it was filled with such sadness, so much anxiety, and so much fear.  And because I’m still amazed at the amount of tears the human body can produce. It’s an awful lot.

At just after 7am, the nurses and anesthesia team took him away from us and into an operating room where they stopped his heart, successfully repaired his defect, and performed an operation that doctors now say might just have been “curative” for my son.  {I use that term loosely though, as Preston, despite the surgery, will need lifelong check-ups and thorough evaluations with cardiologists.}  His surgery lasted hours. Family and friends waited with us all day long in the waiting room.  The surgeon took patches from Preston’s pericardium {the sack that surrounds the heart} and created a patch closure at both ends of the tunnel.  Below is a picture of the diagram the cardiothoracic surgeon drew afterwards.  This diagram hung at the end of Preston’s hospital bed for the duration of his hospital stay. It’s now safely tucked away in his baby book for him to keep forever. 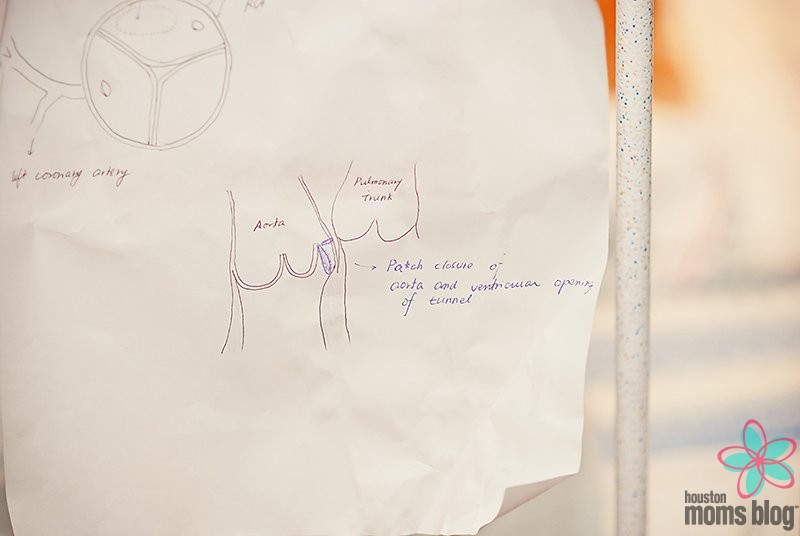 They called the surgery a huge success! Preston’s cardiologist, the one who spent hours and hours after clinic reviewing my son’s films until she figured out just what exactly was wrong with his heart, got to me first to tell me the good news.  With tears in her eyes, she told me the surgery went way better than they thought it would.  There were no complications.  He came off the heart-lung machine the very first try.  His blood pressure was already looking better, and Texas Children’s Hospital had successfully repaired this very unique defect. She was beaming, and we couldn’t quit hugging each other. There are some fine folks over at Texas Children’s Hospital and our lives are so enriched because of those individuals and their God-given talents. 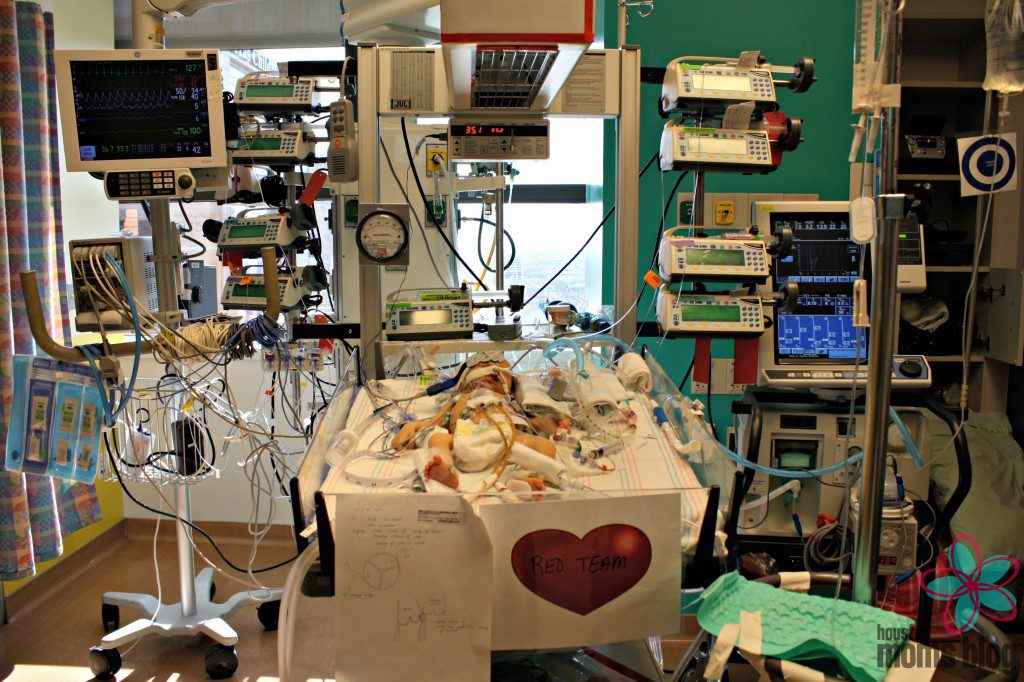 We knew the next 48 hours would be critical, and I wasn’t sure I could bear seeing him post-operative, hooked up to all those machines and so lifeless.  But with my husband there as my strength, I bravely entered his room and stayed strong for my son.  My heart broke for him – it wasn’t easy, but that’s how I became a mother. We spent the next few days at his bedside, holding his hands, singing to him, and talking to him.  On his 4th post-op day, they removed the last and final tube {other than his IVs}.  I felt like I could breath a little easier to see that breathing tube removed and see my son breathing on his own again!  When I showed up to the CVICU the Tuesday following his surgery, his nurse literally handed Preston to me, said “have fun” and left us alone {well, as alone as you can be in an ICU} for a good majority of the day.  I held him, we listened to music, I changed diaper after diaper, and I fed him his very first bottle. It was a super sweet day!

When Preston was 13 days old, Texas Children’s Hospital let us bring our baby home.  Looking back, my biggest fear was that I would never get to bring my baby home from the hospital.  I longed to hold him in his nursery, and I’m so thankful that I did get to bring him home, celebrate his homecoming, and spend many, many nights holding him in his nursery.

We now go back to Texas Children’s Hospital on a yearly basis for an echocardiogram and a check-up.   Each year we get a good report, and we truly give God all the glory for this. Preston took a medication three times a day for almost two years, but he currently takes no medication. He now has normal heart function.  They are watching and will continue to watch his heart valves as they, although functioning very well, appear “sloppy.”  Despite that slight concern, his cardiologist thinks that this could indeed be the only heart surgery that Preston will face.  We pray daily that that proves true as Preston continues to grow. Only time will tell though, as this is such a very rare heart defect with very few documented cases.

My son turned three last month.  He is healthy and full of so much life and energy.   Truth is, he rarely sits still.  I’m blessed to be his earthly mommy.  His story inspires me – he’s helped shape me into a better person.  He is my hero! 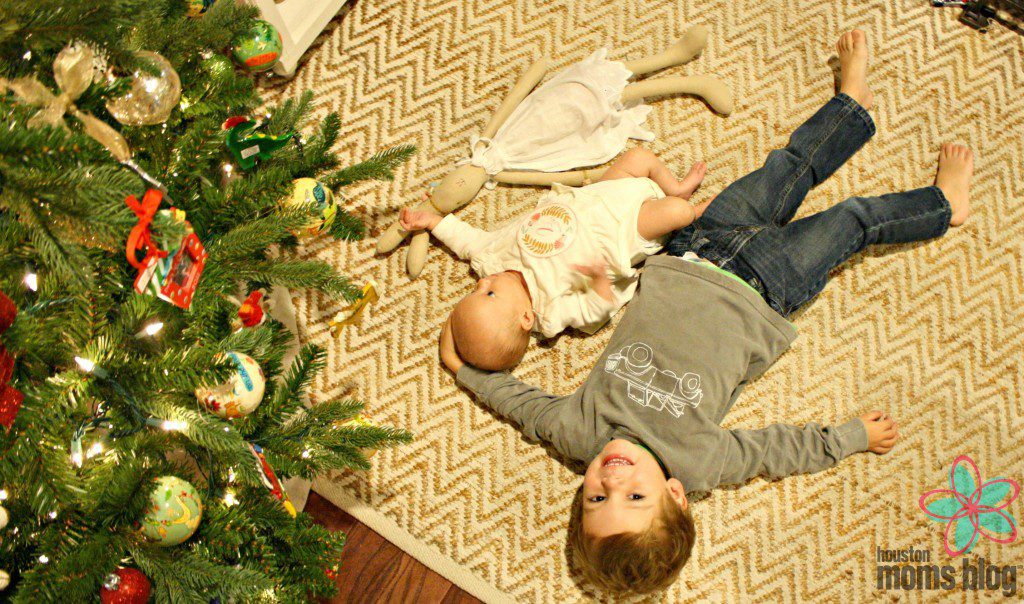 Texas Children’s Hospital shared with us up front that they had never seen this condition before.  So of course that meant they had never treated this condition before – that scared the daylights out of me.  February is heart month and February 7-14th is Congenital Heart Defect Awareness week.  If  sharing my story could save just one child, well then that is more than worth it!

Nearly one in every 100 babies born will have some type of CHD, many not being diagnosed before birth.  I recommend all moms request a pulse oximetry {an inexpensive, quick, and noninvasive test} to be performed on their babies before they leave the hospital.  Pulse ox testing can help pick up an undiagnosed CHD before it’s too late.  Many states are finally writing this into law, and I’m happy to say that Texas is one of those states as of June 2013!  Early detection is key.

Thank you for reading our story.

Today Houston Moms Blog is dedicated to spreading awareness about congenital heart defects.  Please join us as inspirational local moms share the journeys of themselves and their little ones all throughout the day.  Our hope is that through this series, we can shed some light on CHDs and that these courageous fighters will become the voice of heart defects here in Houston.  To read more, please click here.