Forget episodes of Sex and the City. So long Dateline and CSI-Miami. Your free TV time is now probably filled up with TV shows your kids like watching. Ahhhh… kids TV shows. We love them, we hate them. We feel guilty for letting our kids watch too much of them. But, it happens, so now we have it – a list of the most annoying kids shows. 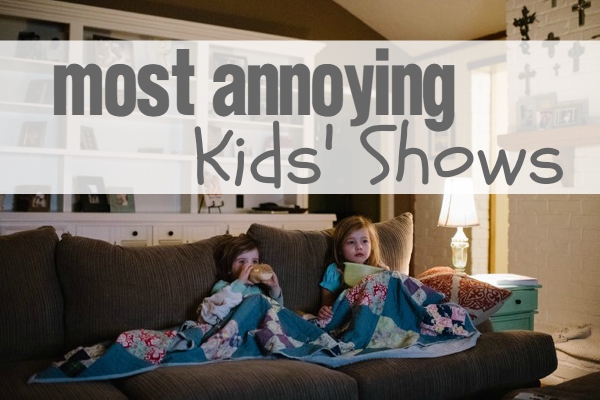 Caillou :: This has to be first on the list. I love me some PBS kids, but this kid Caillou. HE WHINES all the time! He’s like what, four years old? Waaayyyy too old to have a whiney voice like that. His parents don’t seem to mind the constant whining, and his mom never corrects him. And don’t get me started on the song. Because I’ll sing it.

Nina Needs To Go :: This is a filler show on Disney that they plug in between other shows. So, it’s only about 4 minutes. And 4 minutes too long. Okay kid, we get it. You don’t need to go to the bathroom. Wait?! You do…and there is no potty nearby! EMERGENCY!!! Clearly this kid has potty problems. I can understand this happening once or twice. But every. single. time?! Luckily, “Nana” usually swoops in and saves the day, bringing Nina to the potty just in time.  I will say I love that the hero in this story is always the grandma. Grandma’s always save the day. TRUTH.

The Wiggles :: I made a rule in our house. No kid shows with adults acting weird. So honestly, I don’t know much about The Wiggles. Only that it’s four grown men acting like idiots. Somehow this show has become wildly popular, and they actually have {had?} a traveling show where people paid money to go see them. Geez, the things parents will do for their children.

Kate and Mim Mim :: Why are the parents always so happy and agreeable? Have you noticed the mom’s weird half smile and the dad’s scary eyes? The synopsis – Kate has a cute stuffed bunny that turns into a giant purple thing and takes her to an imaginary land. The characters just look weird. And her voice… Does anyone else think her voice is beyond annoying?

Barney :: Yes, this is still on TV. Yes, it’s still as lame as it has always been.

Spongebob Square Pants ::  This show is super popular; it’s been on TV for years and has even upgraded to movie status. Heck, we had yogurt the other day with a Spongebob on it. So these people must be doing something right. {Although I’m not quite sure what.} But this is in the “no watch” zone in our house. Mainly because of the constant farting and other obscene noises. Have you heard his laugh? The laugh is what finally got me.

Disney Auto-Tunes :: Disney is trying to be cool. Only, they are about 8 years behind on it. {Or maybe I’m the lame one, because I feel like auto-tunes was overdone after “Charlie bit my finger” went viral years back. I could watch that 100 times.} Anyway, back to Disney. If you haven’t seen it, Disney mixes up clips from different shows and adds auto tunes to the characters, like Sophia or Jake. It might be cute once, but beyond working my nerves between every commercial break.

Yo Gabba Gabba :: I’ve heard this show compared to an acid trip. The main guy DJ Lance seems pretty cool, except he wears a bright orange jump suit and is always carrying around a suitcase with weird alien looking creatures in it. The main characters on the show are Foofa, Brobee, Todee, Plex, and Muno… Yes, I had to google that. I can stomach this one because they often have awesome guest stars like Black Jack, Sarah Silverman, and Erykah Badu.

The more I think about these annoying shows, I think… Maybe they are not so annoying on their own. Like, ONE EPISODE. But if your kids are like mine, they get stuck on a favorite and insist on watching it over, and over, and over again. Only causing us parents to grow an intense hatred for these poor well meaning cartoons.

I know I’m not alone.  Which kid shows get under your skin???