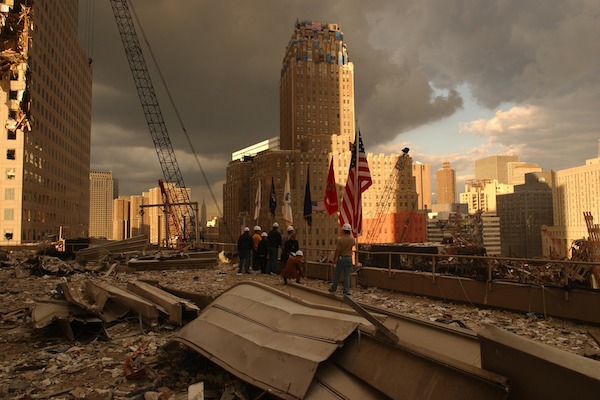 It’s hard to believe it’s been 17 years since the 9/11 attacks, because I still remember that day like it was yesterday. I was in my second year of undergrad at the University of Texas {Hook ’em Horns!}, and I had begun my day just like many before it. Except this particular day, September 11, 2001, I decided to turn the news on as I was getting ready for class. What I saw was something that took a long time to register. I remember seeing a tall building on fire and the news reporters talking about a terrorist attack. I didn’t have time to stick around and understand all of the facts, because I was in a hurry to make my bus to campus.

I left my apartment and my mom called me as I was walking. She was recovering at home in Sugar Land from a major surgery. Her voice was frantic. She asked me if I had seen what happened in New York. I told her I saw it on the news, and it looked crazy.

And then she shouted, “Your brother is in there!”

“What!?” I asked. I stopped dead in my tracks in the middle of the street.

“Ben is in one of those towers. He just started his three-week training with Morgan Stanley, and he is in the World Trade Center.”

My heart was pounding, and I was in denial. I was so accustomed to him being in Austin with me, and I didn’t remember him saying he was leaving for this. I asked my mom if she was sure, and she annoyingly emphasized that he is definitely there. She told me she and my dad had tried to call his cell phone multiple times, but there was no signal to his phone, and they had heard nothing from him. I told her to please call me immediately if she heard anything, and that I would do the same.

What do you do when you hear something like this?

I couldn’t stand in the middle of the street all day. My brain was swirling with thoughts and fears, and there was nothing I could do in that instant to change anything. I decided to go to campus because I knew I would be an emotional wreck at my apartment by myself, and I knew I would see one of my best friends in the class that I was heading to. I found her and told her what I had just learned and she did everything in her power to keep me calm and logical until we knew more.

By that point, most classes were either cancelled or optional to attend. I just needed to sit, so we walked inside our classroom. The professor decided to talk about what was happening and tried to comfort all of the students who showed up. Then I realized my oldest brother, Ari, was probably on campus {he was a PhD student} and I needed to find him. We sat in one of the board rooms in his building with the news on, as we waited and waited. We were both so quiet, and we both had that same look on our face. That look that said, “Our brother didn’t make it.”

I’m not sure how long we waited, but watching the news was making everything worse. We left campus and went to Ari’s apartment. Sometime around noon, my dad called us to tell us he had heard from Ben, and that he was OK. Despite the fact that we only had to wait about four hours to know something, that increment of time truly felt like an eternity. We were so relieved to learn he survived, but there were so many questions. Also, I really needed to hear Ben’s voice. I’ve heard about this phenomenon before {for instance, when the wives of military husbands actively fighting overseas don’t believe their husbands are really alive until they hear their actual voice} and there is no logic to it. But it’s not really believable that they are alive until you hear it out of their mouths.

I stayed at Ari’s for the rest of the day as we periodically watched the news and tried to grasp what actually happened that day. As more time passed, we learned about about another plane crashing into the Pentagon, as well as a fourth plane crashing into a field in Pennsylvania after the hijackers were thwarted by the passengers. Finally, around 7 pm, Ben called me. 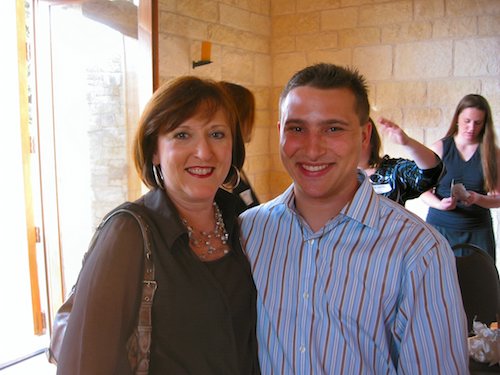 My Brother Told me the Facts

Ben had gone to his training that morning, and during a short break, he decided to go down the elevator and outside to smoke a cigarette. Oh, the irony! I would never be so happy in my entire life that my brother was addicted to something that might be slowly killing him, but it quite possibly saved his life that day.

As soon as the elevator reached the ground floor, Ben heard what he described as a really loud thunder clap. It was as if lightning had struck right next to him. He looked out the windows, expecting to see rain, but what he actually saw were big pieces of building on fire, falling down. That’s when he heard the communal scream that a crowd makes when they realize they are in danger. Along with everyone else, Ben ran into the mezzanine level of his tower to attempt to get on the subway, but when the crowd quickly realized the subways were shut down, they all tried to go out the exit of 4 World Trade Center. There were a line of security guards outside the exit, forcing everyone to turn around because there were building pieces falling right there. That’s when the crowd turned around and went out the exit Ben was originally planning to go out of for his cigarette break.

One of Ben’s friends, who was also training there, grabbed Ben and told him the exact way to escape if he didn’t want to be crushed. She learned these skills after her apartment building in Oklahoma City was completely decimated from the Oklahoma City Bomber. She told him to stay close to the building, not to look up, and to keep his mouth closed. When he realized his mouth was hanging open, he closed it and whatever was in the air crunched in his teeth. They sidled along the building, like spies would. As they got to the other side of the building, and maneuvered around a big hunk of burning metal in the road, Ben stepped out and looked up. He saw all theses pieces of paper floating in the air and he grabbed some of them. He realized that the company name embossed on them were not Morgan Stanley, and considered the fact that other people inside these towers that were instantly affected by what happened. He looked up again into Tower 1 and saw a smoking hole. Someone told him an airplane had caused it.

They continued to walk away from the the World Trade Center and found themselves in front of a hair salon. A woman was inside screaming on her cordless phone in a foreign language. He and his friend were trying to get her attention when Ben heard a plane fly over his head, very low to the ground. He looked up to see the belly of the plane, and watched it fly directly into the corner of his building, somewhere around the 61st floor – exactly where he had been training earlier that morning. Ben said he felt like he was watching in slow motion as the plan entered “caddywhompus” into the building. Then there was an explosion that knocked him off both feet and onto his bottom.

He quickly got back up and started walking towards his friend’s hotel, which was about three miles away. He knew he needed to call our mom as soon as possible. He kept stopping at the pay phones that didn’t have huge lines, and realized each time that the phone was dead {hence, no long lines!}. They walked about 10 city blocks and then watched Tower 2 fall to the ground. Ben described that after the building collapsed, there was still a dust cloud in the exact shape of the tower. Then, a breeze blew the dust cloud out into the river, and all he saw was a hole in the skyline.

When they finally arrived at the hotel, Ben walked straight to the front desk, explained what happened, and asked to use their phone to call our mom. My mom answered his call and when she heard his voice, Ben said her voice and sobs were an experience he never wants to have again. The sheer amount of fear and pain and worry she expressed was ultimately what scared him. Up to that point, he had just been going through the motions without much else registering on an emotional level.

As the day went on, more and more survivors trickled into the hotel and many of them ended up in his friend’s room since her phone was one of the only ones working to make outside calls. Eventually, Ben’s supervisor also ended up back at the hotel and called a meeting in one of the board rooms to get a head count of all the trainees. Fortunately, all 400 of them had made it out safely. He gave everyone their three-week stipend of $500 in hopes that it would help them until they were able to get home.

He spent the night in the hotel, and went back to his hotel the next day to get his personal belongings {minus his cell phone and briefcase that went down with the tower}. He then went to New Jersey to stay with family until he was able to fly out. Ben returned to Austin a week after the attacks, safe and unharmed. Several years later, while seeking therapy for other reasons, he was diagnosed with Post Traumatic Stress Disorder, which had unconsciously been affecting him for nearly eight years. 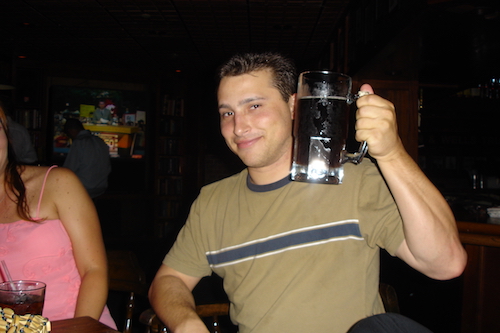 Today, Ben claims he doesn’t think much about 9/11, and when he does, it’s not difficult for him to talk about it. The one weird thing that happens to him every so often is an interesting thought he gets whenever he sees an airplane in the sky and a building somewhat near it. He said he always expects that airplane to crash into the building, even if it’s visually obvious that the plane is really far from the building.

Each year, on the anniversary of 9/11, I take a moment to think about my brother, and to thank God that he survived the attacks. I usually send him a quick text letting him know I am thinking about him, and I love him, and then I continue my day. However, I’m also very aware of many people who lost someone during that time, and how very different they are likely feeling as each year passes without their loved ones. America changed forever that day. No one will ever forget what happened, nor take for granted our sense of freedom and security that seemed all too illusive after those attacks. 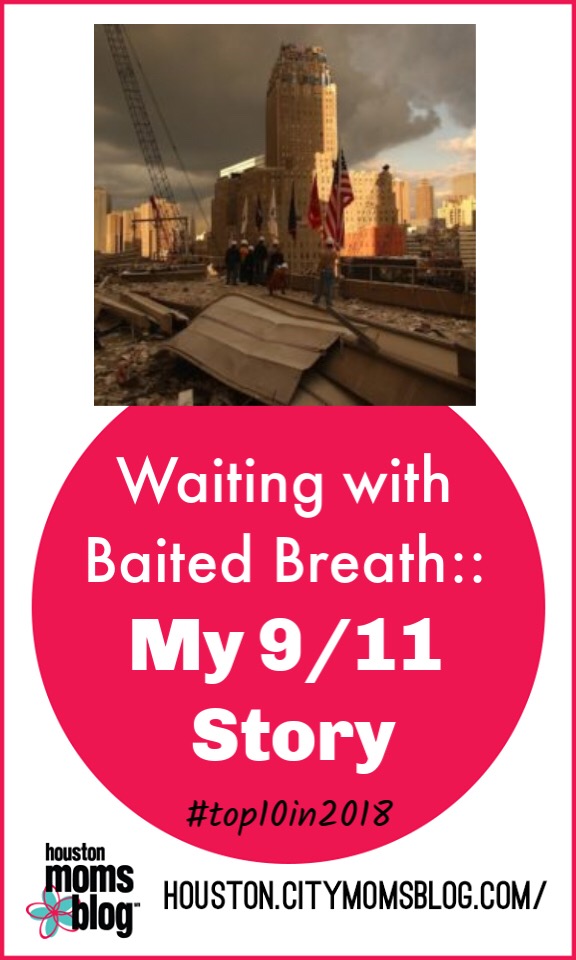