Am I raising a narcissist?

Now ask me if that bothers me, because it doesn’t.

Back then, having those qualities made you confident. Nobody was name calling or criticizing parents for instilling a sense of value in their kids. Today, we view them as narcissistic. If I am raising a daughter who is the center of my universe, who feels strongly enough about herself to believe her opinions to be true, and who isn’t afraid to speak up, well, then call her a narcissist and I’ll take that as a compliment to my parenting ability.

Perhaps it’s a generational thing, but I see nothing wrong in raising my children to think that the world revolves around them. Before you judge {although I am sure it’s too late for that}, I am not attempting to raise a spoiled brat. I am attempting to raise someone who looks at the world as their stage. I want her to know, deep in her being, that the world around her BELONGS to her. She can mold it and change it as she sees fit. I don’t ever want her to think that she doesn’t have the strength, ability, or power to make things happen in her favor. I’ve always stuck by the ideology that people don’t do things against others, they do things for themselves. If we can all embrace that, stop getting feelings hurt so easily, and stop judging one another for our actions, we could possible reach an unprecedented level of understanding.

I fully recognize that I am walking a fine line between raising a monster and raising a self-confident female, but that is a line that I am willing to walk.  It doesn’t necessarily scare me to think that my baby will grow up putting herself first. So often people, especially females, put their own needs second. I don’t want my daughter to completely disregard other’s needs, but I most certainly want her to feel good enough about herself to put her own well-being first. Each and every time.

If the path to narcissism is paved with self-confidence, then you better get in line.

Because I have a toddler who is going to be leading the pack.

And I’m totally okay with that. 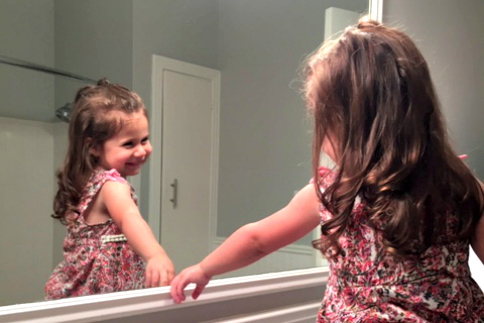