We don’t have to tell you, 2017 has been a roller coaster year for the people of Houston. But as we close out the year, we were given the most perfect gift. Snow…

‘Twas the night before the big Houston snowfall, when all through the house –
We were checking every weather expert in town, even the one owned by a mouse.
The gloves and hats were set out at the back door with care,
In hopes that the snow flurries would soon be there.

The children were eager, but eventually went to bed,
While visions of snowmen and ice skating danced in their heads.
And Mama with her Facebook, and Dad looking at Snap,
Kept checking for snow pictures before taking a long nap.

When out on the lawn there arose NO such clatter,
We sprang from the bed to see what was the matter!
Away to the window we flew like a flash,
Tore open the shutters – and what? It just looks like ash.

The moon on the breast of tiny flakes of snow,
They melted in seconds on objects below.
Let’s not wake the kids unless more snow appears,
I’ll set my alarm to check — so have no fear!

We laid back down to bed, hours later seemed so quick,
The alarm waking us up, oh I hope the snow is thick!!!
I couldn’t believe my eyes as I peeked thought he blinds!
The snow was here! It’s inches high! The kids will lose their minds!!!

“Now Claire! Now Daisy! … Daddy you get up too!
You won’t believe it, it’s white and fluffy, nothing like goo!”
On the tops of the trees and a blanket over it all,
We couldn’t get outside fast enough, and even made a few calls.

From snowmen to snow angels we frolicked and played.
What a year 2017 has been for Houston … and THIS is the best day!
A little snowfall that has brought much cheer.
The kids {both big and small} will never forget this year! 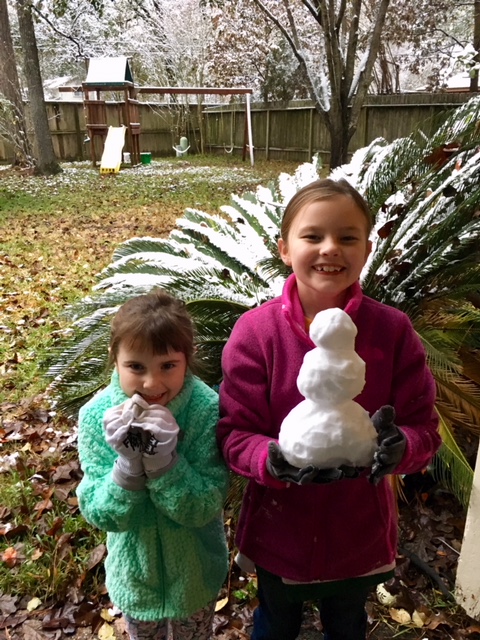