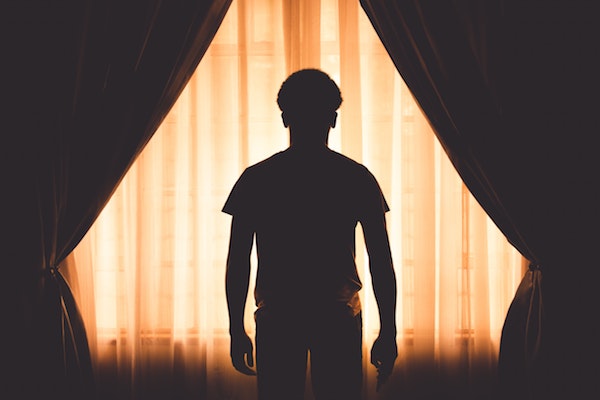 I still remember the first time we met.  He had gigantic blue eyes at the time and a shockwave of orange hair circling his head, stopping just above tiny elfin ears which flanked two wide-set circles of black and blue.
At a mere six pounds fourteen ounces, we were left alone in a hospital room, with me unable to utilize my recently severed abdominal muscles to lift myself enough to grasp the tiny plastic bassinet that had been left at my bedside, cruelly just beyond my reach.  Like so much of our lives together, it was a metaphorical beginning and a lesson that it really was just the two of us and if I wanted any magic to happen, I better be willing to tough it out and find a way to do this on my own.  So inch by inch I squenched myself down the bed, flat on my back, until I could reach that plastic bin that held my tiny human and pull it closer to me.  It was our first night as a pair, and we were left completely alone, but we found our way together.
In those early years of motherhood, when you’re trying to find your footing, establish routines and move the pieces of your former existence around like the world’s largest game of Tetris in order to find a new way to live in accommodating this tiniest of wonders while still meeting the demands of the outside world, there is little time to daydream about what this ball of bitty human will be like as he grows…will he be brave or will he be cautious?  Will he be outgoing and athletic or bookish and quiet?  What kind of music will he love and what will spark his imagination and ignite his soul?
And the routines take over and days turn into weeks and into months and into years and before long, you’re able to see the boy turning into the man as the magic reveals, the fog dissipates, and the petals unfold piece by piece the wonderous personality that has been forming itself all along.
And there are moments when you worry…when you see that he also worries…and you worry that his worry is much like yours and you know the struggle that comes with worry like that.
And there are moments when you fear…when you see that he also fears and that, like you, that fear often turns on itself in ways that can be fraught with destruction.
But you also see how he loves…how he still asks for spontaneous hugs multiple times a day…how he curls up on the couch and lets his little brother rest his head on his shoulder and the way he pours his heart out until it spills forth from his eyes and your worry comes back, knowing what a dangerous game it is to be a sensitive young man.
You watch him as he holds the door for women and says “yes m’am” and “no sir.”
You watch him eagerly take on a position of leadership in his church while assisting with the younger children, proud to assume the dignity that age and seniority can bring.

You watch him while he rides off down the street on his bike, now navigating himself to school and back on his own…and you can see that day in the future when he will eventually ride off into this great big world, forging his own path.

And you smile, with gratitude, at being a bystander to the magic unfolding before you, bearing witness and serving as a guide to the human life forming itself before your very eyes, while remembering the moment you had to scrunch down the hospital bed in the middle of the night, alone and in the quiet, to pull a plastic bassinet within your grasp and gaze into the tiny face looking up at you in the darkness.