Let’s cut to the chase here – I’m not pregnant.  Nor am I trying to get pregnant.  I know the title of this post may seem a little misleading, but I promise I am going somewhere with it.

As you may already know, Skeeter’s birth was slightly traumatizing.  {I’m not going into the details now, but it you want a refresher, you can check it out here.}  So stressful, in fact, that my hubby and I agreed that our original plan of having two babies two years apart was officially on hold.  While we are so thankful for a baby that is healthy now, we just aren’t quite ready to jump back in the saddle.

When Skeeter was about 6 months old, I thought I was pregnant.  I hadn’t actually taken a test, but Ol’ Mother Nature was super late.  I had a regular appointment with my OB, so I relayed my fears to the nurse checking me in.  She checked my blood pressure and immediately asked, “Are you okay?  Your blood pressure is really high!”  Um, no, I’m freaking out!  Could you please just tell me I’m not pregnant?  My OB came in a couple minutes later and calmed my fears, but I still cried all the way home, just from the idea of possibly being pregnant.

Fast forward one year, and I no longer have panic attacks at the thought of two pink lines!  But that doesn’t mean I don’t still have fears about another high risk pregnancy.  While I love the thought of a squishy newborn and Skeeter being a big sister, I am worried about this baby that doesn’t exist yet.  What if things go wrong again?  Even though every test under the sun has come back negative for indicators of preeclampsia reoccurring, I’m not sure I’ll ever completely shake the fear.

After giving this some thought, I realized I’m probably not alone.  So I decided to talk with some fellow NICU moms who HAVE done it again and see how they handled the stress.  The first person I spoke with was Houston Moms Blog’s own founder, Kelly.  As many of you have read this week, her sweet boy also spent some time in the NICU.  I also talked with my Phi Mu sorority sister Eva, whose twins spent some time in the NICU too.  Here’s what they had to say ::

How did you prepare yourself (physically & emotionally) for another pregnancy after the NICU?

{Kelly} Our situation was so unique in that I knew the cause of Hayes’s NICU stay, and I also knew that the chances of it reoccurring were virtually nil.  So my husband and I decided that once Hayes was finished with surgeries and was healthy and strong – that we would try again.  Well, what we thought was his final surgery happened in July…and I got pregnant in August.

{Eva} I honestly tried not to think about it. For me, my NICU experience was fairly trauma free. My girls just needed to gain weight. There was so much that was different between my first {twin pregnancy} and my second {singleton pregnancy}. A fellow twin mommy friend put it best by saying that going from a multiple pregnancy to a routine singleton was like going from first class to second class citizen status. While I didn’t worry too much about another NICU stay per say, I did know less about the second baby prior to birth.


How long did it take after the NICU before you felt ready for another?

{Kelly} Not very long. I loved being a mom so much and my heart longed not only for another child for me, but for a sibling for Hayes as well. Nothing could stop that yearning – not even a NICU stay or surgeries. Once I knew that all was well, I was ready to start trying again.

{Eva} I’d say about a year and a half. I think it took me about that long to feel safe that my babies were healthy and developing normally. So even if there were to be another NICU stay in this baby’s future, it would all be okay.

Did you find your next pregnancy more stressful, knowing what happened before?

{Kelly} In some ways yes, and in other ways no. I knew the demands that came with being a NICU mom, and I knew that it would be so incredibly challenging to do it with a toddler at home as well. So I always kept that in the back of my mind. However, I also remembered to cherish every day of pregnancy and enjoy the miracle happening inside since I felt almost robbed of that my first time around.

{Eva} Not necessarily. I think I had the relief of the twin pregnancy first. So, chances of my singleton pregnancy/ies not going to term were significantly less.

What would you say to fellow NICU moms who are considering another pregnancy?

{Kelly} Follow both your heart…and your mind.  It is a tough balance to juggle the feelings that are placed in your heart while also keeping in mind the risk factors too.  Get educated, talk it out with your significant other, and do what is best for you and your family.

{Eva} I realize it is easier said than done, but try not to focus on what went wrong. Each pregnancy is different. Now that we have the NICU experience under our belts, it is not a scary unknown thing. Our babies are in the best possible hands. And we get a little extra healing time, so we are that much stronger when we bring our babies home.

I want to hear from you – I know we’re not the only NICU mommas out there!

Did you have a pregnancy after NICU?  Tell us about it in the comments below. 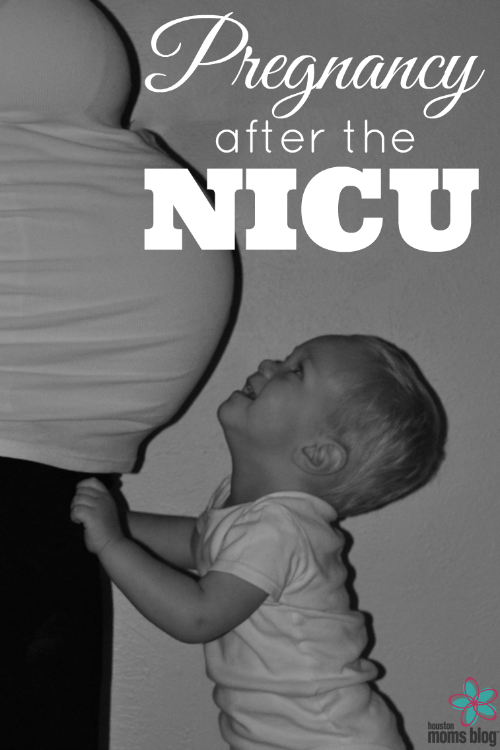 How to Be an Angel to a NICU Family