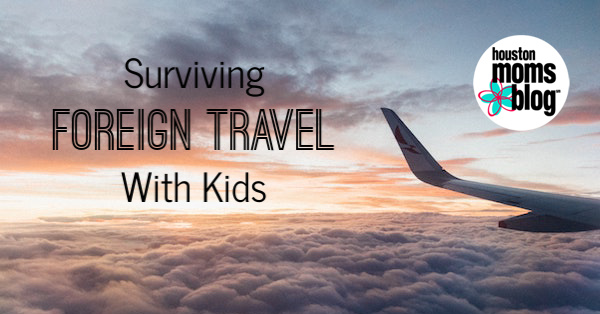 I have always loved foreign travel. My first flight, when I was five, was with my mother and brothers, from South Africa to Holland.  Back in the ’80s, there were no rules about seatbelt signs, and people lit up their cigarettes while loitering at the toilet door. The smoke swirled, the plane smelt rank, and this was pretty much how it went for the 12 hour flight. I remember sleeping on the floor at my mom’s feet. ON THE FLOOR! Yet, I remember feeling the rush of excitement of going somewhere different.

Things have changed drastically since then, but I still feel that rush when heading onto a plane. There is something about the wee little liquor bottles and the dreadful food that says, “We are going on an adventure”. Nothing, however, kick started my adrenaline like traveling with KIDS!

The agony of foreign travel started when I had two littles under the age of two. It took far more than champagne to quell my nerves. I remember arriving at the door of the plane, two crying babies in tow. I had a giant nappy bag and fought my way down the isle, apologizing before I had even reached my seat. It was the start of what was to become one of many flights, and many apologies. Kid 1 had by now already vomited on herself and the car twice en route to the airport. I get stares from passengers and  can literally see their lips moving as they whisper prayers, “Please not me; please let them pass us by.” I know that prayer, because as a solo traveler I too had whispered those very words. The drink trolley could not come fast enough.

Foreign Travel with Kids Throw Back

Two flights come to mind that still leave my skin crawling. The first was when Kid 2 was 3 months old, and could not sit by herself and of course had no seat of her own. Kid 1 was vomiting – again – ….will travel, will vomit – by any means necessary {nothing has changed 8 years later}. Anyway, Kid 1 is covered in vomit – it is on the seats, in the armrests and not one air hostess will hold kid 2. I was told it was against company policy {insert eye roll} Eventually, a kind fellow took Kid 1 and undressed her in the isle while I stood star struck as he wiped the gunk from her little curls. Whereever you are mister, you saved my life that day. It is now my husband’s responsibility to pay it forward to another person in dire need as others look on. Fact:: Men have always been the first to offer help on any flight I have ever been on with my children. Not one woman. What is that about?!

The second flight was a sticky mess. Kid 2 was far more mobile by then, and all of a sudden there was a stink. I remember thinking every curse word, and then “Please God, not now”, but it was now, and it was worse than I could have imagined. I hear the drink trolley coming down the aisle and could imagine everyone breathing out with relief. Well. I have never seen such a sticky mess in my life, everywhere Kid 2 turned or moved, she left more poo. It was the golden touch that kept on giving. It was EVERYWHERE. I had by now elevated her above my head, just to avoid it touching anything else. It was mortifying. By now, the air smelt pungent. Noses upturned, I remember thinking, make no eye contact.  The drink trolley was by now at my seat, forcing her to reverse as I lunged my way towards the lavatory, leaving chaos behind me. The only person smiling was Kid 2.

Once she was cleaned up – nothing short of a fire hose needed I might add, I was handed three new seat covers, and a giant bag for the dirty ones. Has anyone ever had to redress their airline seats? Hands up? The end of the ordeal was when I was handed the smelly spray bottle, which I had to kindly spray down the isle, apologizing to the gaping faces staring up at me, leaving the trail of lavender in my wake. I confess, I am pretty sure I left half my “WTH’s” on that plane that day. I swore I would never be in that position again, and would be far more prepared in the future for any foreign travel.

It all starts with your luggage. Weigh your bags before you leave home. There has been more than one occasion where I have had to unpack my bags on the floor of the airport, shifting the weight around, to meet the 50 pound limit. I travel with two hard cases and one soft bag; I save on the weight allocation as the soft bag weighs almost nothing. This way, I can pack more, or buy more.

For foreign travel, you will be up to your neck in paperwork.  Depending on your country of destination you will need to travel with ORIGINAL unabridged birth certificates of your children. Should you travel without your husband or the children’s father, a signed document with a copy of his passport must be present, giving consent to leave the country. This is to prevent child trafficking and kidnapping. Always double check your passport validity and that you have valid visas for any country that you are entering. Paperwork is key! When doing your research on the country you mean to travel to, always check their regulations of entry and exit as each country will have their own rules. Don’t forget your pen; as a foreigner you will need to fill in an entrance form before leaving the plane for each member of your family. Keep your passports close at hand so you don’t have to hunt around looking for passport numbers.

I have a giant bag, which I insist remains at my feet for easy reach. In the old days, this bag contained child appropriate meals for the little ones, wet wipes, two extra sets of clothes for each kid, and about 5 plastic packets for either vomit, or messy clothes. I also packed slipper socks as it gets cold up there, spare blankets, which I threaded through the dummy loop, which ensured they never landed up on the floor. Trust me, nothing is worse than being on the hunt in the night looking for the elusive dummy. I brought prepped bottles where I just needed to add the formula.

Also included in this Save My Life Bag was a syringe for each child {without the needle) with an already measured out serving of Benadryl. This would be given to each child after the meal trays had been cleared, as the light then gets turned down, which would be the kind of time they would need to get some shuteye, with the help of the meds. Always test your kids on any meds days before departure as each child reacts differently. What you don’t want is a child on a high. Important for the motion sick kids:: pack extra water and motion sick tablets – administer these 1 hour before travel.

*Parents. Always check with your doctor before administrating any medication on your children, especially before foreign travel.

Kid 1 and 2 are now seasoned travelers. In my save my life bag its now all about the food, so I have ample snacks like nuts, cheese and stick, crackers, packets of fruity snacks and lollipops for take off and landing to help with the popping of the ears. Kid 2 usually eats all the snacks by take off ….bring that little liquor bottle why don’t you. I also pack Melatonin chewables which helps them fall asleep, kind of.

Before any foreign travel, load those devices with saved movies and games. This is for airport loitering while waiting for your plane and the chance of flight delays, and of course till the flight entertainment turns on. Pack drawing books, color in pens and small puzzles put into little ziplock bags. Included in my Save My Life Bag I pack a large ziplock bag full of little toys – LOL dolls galore, some Barbie dolls and their favorite teddy bears. The girls now each have a roll-me bag which fits under the airline seat. In this bag is a sweater, a bag of their favorite toys and a head hold for sleeping on the plane. Remember extra ear phones! Kid 2 breaks hers all the time.

The Sweet Taste of Foreign Travel

Foreign travel can be extremely daunting, especially with littles. I was that mom who had a leash on my kids when moving through the airport. I could not manage all the bags and two kids running amok. No they are not dogs, but it kept them safe and kidnapping was one less thing to worry about. The experience of foreign travel is invaluable and it will light a fire in your child’s belly, one that will burn through their adult lives. The love for change, the love for other nationalities, the love for the taste of foreign food, the smells, following new rules, the love for adventure and beauty of the unknown. It bonds your family in a whole new way. It is a rare gift. Make memories.

Yes, you will all leave some “WTHs” on each flight, but its worth every second.

Who else has pro tips for foreign travel with kids? Let’s hear them in the comments! 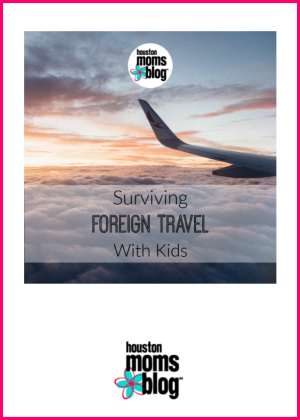