We are honored to again partner with Reliant via this sponsored post. Together, we are making an impact on the community, and we hope it inspires you to make a difference too!

In full transparency, I am not that big of a football fan. I mean… I enjoy watching football, I get the overall gist of the game, and I love the Texans because I am a true Houstonian through and through – and I am not going to cheer for the Cowboys for crying out loud! Houston > Dallas … hands down!

But, I have never had a fantasy football team or tailgated at an NFL game. In fact, I think I have only been to two {maybe three} Texans games in my life…

Yet, despite all that, when I got the incredible opportunity to represent our fierce tribe of Houston Moms at Reliant’s Charity Flag Football Game, not just as a spectator but as a player, I was giddy with excitement – I am far too competitive to let an opportunity like that slip by – so I jumped at the chance to throw around the ole’ pigskin at the Texans’ training field.

This was Reliant’s inaugural Charity Flag Football Game, and each team {GO BLUE!} consisted of local Houston media and all-star high school athletes, coming together to show off their football skills and raise money for their charity of choice.

As I walked into what is lovingly referred to as “the bubble”, or more formally known as the Houston Methodist Training Center, I was blown away by the monstrous size. {You don’t realize how big a professional football field is until you are standing on one!} Luckily, for us amateurs, we only played on half the field, because YIKES, it would have taken no less than four days to complete our game if we played on the entire field!

Overall, it was truly a once-in-a-lifetime event, so I tried my best to take it all in. In the process, I learned a thing or two …or three… along the way:

I don’t mean to brag or anything, but the last time I played flag football I was 19 years old – and in the full swing of my freshman year of college. That year my team walked away as the Ouachita Baptist University Girls’ Intramural Flag Football Champions. So, let’s just say I knew I was walking in with some raw talent … I mean, how different could it be, right? WRONG! Let me tell you how different it was.  It was roughly “14 years and four children later” kind of different. I found myself gasping for air and thankful that we were only using half the field – this happened after the first play. The next morning, I woke up feeling as if I had been hit by a truck and discovering bruises in places I didn’t even know possible! Not to mention, when I went back after the game and watched some video footage of my sweet football skills, I realized that although I felt like Usain Bolt running down that field, in reality I was more like an elderly woman attempting to power walk the grocery store. Turns out 33 is not 19 – but that didn’t stop me from playing my little {and very sore} heart out for 40 minutes! 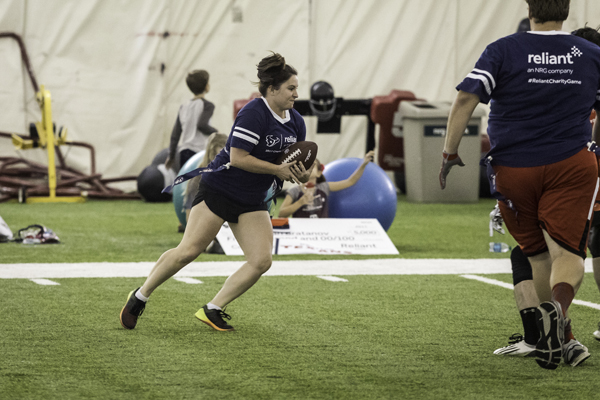 2} Our local media personalities are some of the most caring, genuine people I have ever met – until they spot you holding a football!

I was by far the least influential person on the field. In fact, when the announcer was introducing all the players over the mic, it was somewhat comical to hear my name in this list of local Houston favorites, just because these people keep our city informed on the critical things like Doppler radars, hurricanes, and crime movement … and I sometimes write funny things. Here is a list of all the amazing people that played in the game:

Both on and off the football field, I would put our local news anchors and radio personalities up against any other city! Each and every person I met was so friendly, kind, and generous to welcome me into their circle of TV and radio personalities. Every single person listed above deeply loves the Houston area community, so everyone was hard at work to earn the title of MVP in order to win $5,000 for their charity – no one was holding anything back. At one point, I am pretty sure I saw Tom Koch put Travis Herzog in a headlock. Shortly after, I completed a truly miraculous catch {miraculous because I actually caught the football} and found myself with my face in the turf after realizing Sherry Williams may have forgotten it was FLAG football! I, of course, am kidding! It was a real pleasure to play alongside such a talented group of people that deeply care for their craft and the people of Houston. There is truly no better way to raise $40,000 in scholarship funds for local high school students and $15,000 toward Houston based charities. 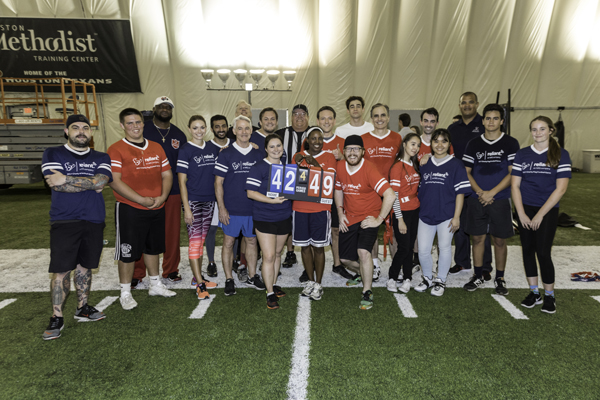 3} It is truly inspiring to see people use whatever influence they have to shine a light on a cause that they are passionate about.

Our city has been through so much over these last few months. So much disaster and devastation. It would be easy to ask ourselves, “How in the world are we going to come back from this?” But, the answer to that question is easy – by banding together and using our influence to help those who are in need, and that is exactly what this game was all about. Was it an amazing experience to get to play on the same field that the Texans play on? Of course! Was it an absolute blast? Yes! Did I make some new friends? Sure thing! But, the best part of the entire experience was at the very end, when every player announced what charity they were playing for and how that organization is shining a light of hope over what could be a very dark time in our city. I am so proud of Houston, and I am so proud of each and every player in this game for using their influence to stand up for the vulnerable in our city and raise much needed scholarship funds for our youth. I absolutely love being a Houstonian! 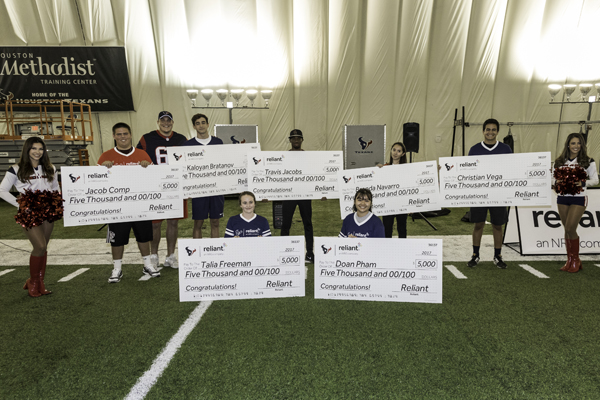 Reflecting on the experience, I have to tip my hat to Reliant for organizing an event that was not only fun, but also inspirational. I will be forever grateful I got to take part. Unfortunately, my team did not win, but there is always next year… I’m coming for you Sherry Williams!!! 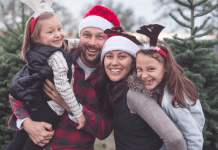