The cool thing about blogging is most of the time y’all just get the overflow of what’s happening in our daily lives – and maybe, just maybe, you’ll relate to it. And know that you’re not alone.

I detest them. Truly, I do. Since my twins were born four years ago, I’ve watched these things like hawks. Especially the first year and a half when we were trying to get my daughter as big as possible for her heart surgery. I tracked everything. And I mean, everything. Meticulously. In a large binder with hole-punched pages. For an entire year. Finally, for the sanity of my household, my a-type personality had to surrender and give it up – but I really never stopped the mental brain game of calculating every portion that went into the twin’s mouths.

My twins were born 4 weeks early, Ryan at 5lbs 2oz and Quinn at 3lbs 13oz {she had a failure to thrive in utero as is common with many heart babies}. So we’ve always been on the small side. And remained there. They are on the charts, but somewhere in the 5th-20th percentile on weight and height for both of them. We call it the “Ryan & Quinn” curve. They’ve never deviated. Never dropped off. Never risen above. They are perfectly proportioned for their body type. That’s just where they are, and likely where they will remain.

Here’s the thing that fires me up. I get comments almost every day {from well-meaning people, I’m sure} about how TINY they are.

“Well, I guess twins are usually really tiny, aren’t they?”

“Do they eat enough?”

No. Just NO. Please don’t go there with me anymore.

We know they are small. We see it every day. And not only are they small, but they are summer babies, so young for their age. Meaning 85% of their preschool class turned four MONTHS before they did. So then the difference was massively pronounced.

Guess what? They don’t know that. Not right now. They are blissfully unaware and happy children. They don’t see height or weight or color of skin. They see kids.

Why can’t we as adults see that? Why must we comment on physical attributes and think it’s okay to make comments to their parents? For some reason, society sees it as acceptable to make comments on a child being small and somehow twisting it so it’s the parent’s fault {or makes them feel even worse because trust – I already feel guilt like I’ve done something wrong or not enough}. I would NEVER dream of making a comment to a parent about a child who looked a little overweight. Never. Neither would you. So why is it okay to talk about stature? I would much rather have strangers and friends alike comment on my child’s behavior, social, or cognitive development. “Gosh, your daughter is just always smiling!” Or, “My goodness, your son is incredibly friendly.” Because they are. They are good kids. They are smart kids. They are athletic kids. They are loving. They love God.

And they are nailing every.single.swinging.milestone in the book.

I don’t know how it is where you live, but in my relatively affluent suburb, there seems to be great emphasis on growing ’em big, holding ’em back, so they can be the next football or soccer star. So, so wrong to me. I want my children to be their best – not THE best. And size has nothing to do with it.

I guess I’m emotionally attached to this issue because I grew up {gasp!} not even on the charts until I was 10 or so. Maybe later than that. My “big” growth spurt came in 9th grade when I finally jumped from 4’10 to a whopping 5’1. And while it cannot all be blamed on how tall I stood {for there were some sweet tortoise shell glasses involved}, I was bullied mercilessly throughout my elementary and middle school years.

And I fear that for my children. I fear that we groom our children to look at size as a measure of what someone can accomplish. It’s garbage. Even at barely 5 feet tall, I still went on to play competitive soccer and even played a year of Division 1 ball at LSU. I want my children to know that they can accomplish anything, do anything, be anything without limitations. Isn’t that what we all want for our kids?

But when people {well-meaning} utter comments about their stature, eventually they are going to pick up on it. And it might make them sensitive. Or scared. Or worse – it could put a running message in their head that they are not good enough.

I can only pray that my children ignore the commentary – or perhaps even pray that people will think twice before saying anything. But my real prayer is that my children know that they were wonderfully and fearfully made in God’s image – and that’s what truly counts. {Besides, as I’ve grown up – pun intended – I’ve learned that being small is actually pretty cool. I enjoy my size now and never give it a second thought – well, maybe when I take a picture with my 5’10” BFF. Grin} 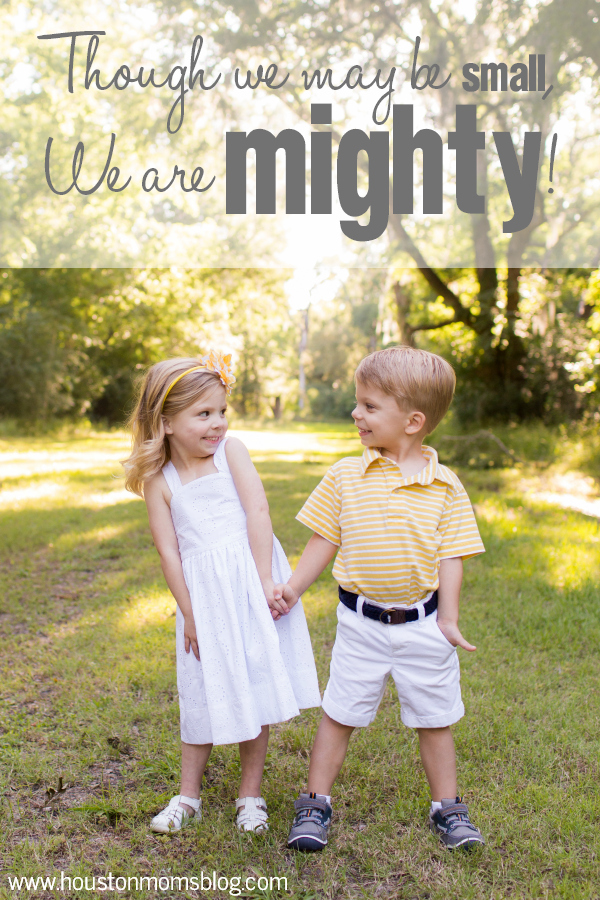 Growth charts? I see you. And I will watch you in case someone starts slipping. But you will not define us.

So what do you think? Are you raising a small child? Do you worry? Do comments hurt you? Am I super sensitive? {BTW – the answer to that one is YES…and I know it.}

Yes, We Should be Making Our Kids Do Chores. Here’s How and Why.