We just finished the longest week.

A week ago, my mom called me to tell me a relative of mine, a second grandma if you will, died. I cried and booked a flight to Miami to mourn my Aunt Flo.

My daughter Penelope, well aware of what was happening, got frustrated that this is now the third funeral she is not attending. She did not go to Cape Town with my husband for his grandmother’s and uncle’s funeral. Penelope made me SWEAR for the HUNDREDTH time that when her Bubbie {my grandma} died, I would take her to Miami. I reassured her she will be able to go and then reminded her that Bubbie was just fine.

Fast forward 48 hours, and I was then in a nightmare. Not only would I be flying to Miami for one funeral, but in a devastating turn of events, my grandma died at the age of 88. Words will never be able to express the amount of grief one deals with when there are two funerals in 48 hours.

As my husband booked three last-minute flights, I was already sitting in Miami with my family, realizing Pandora and Penelope would attend their first funeral. They would attend their first funeral with three other great grandchildren, seven grandchildren, four sons-in-law, four daughters, plus nieces, nephews, cousins, and numerous close friends. My grandma was a BIG DEAL.

When you decide to take your children to a funeral, some people believe you are taking them to watch an R rated movie, bringing them to the 7th circle of hell, and otherwise subjecting them to something they should never see. The question of “Why would you do that?” is frequently asked.

I decided to do what I have always done, and that is respect both my daughters. Penelope is mature for her age and is what we call an “old soul.” On top of that, she is extremely empathetic and sensitive. I also knew she and her sister would sit quietly and not be disruptive. So the only question that remained was whether or not the funeral would be too traumatic.

Penelope {and Pandora too} LOVED their Bubbie. From the time they were newborns, they have traveled annually to Miami to visit her. They have vivid memories of her. They had a relationship with her. She was like no other. 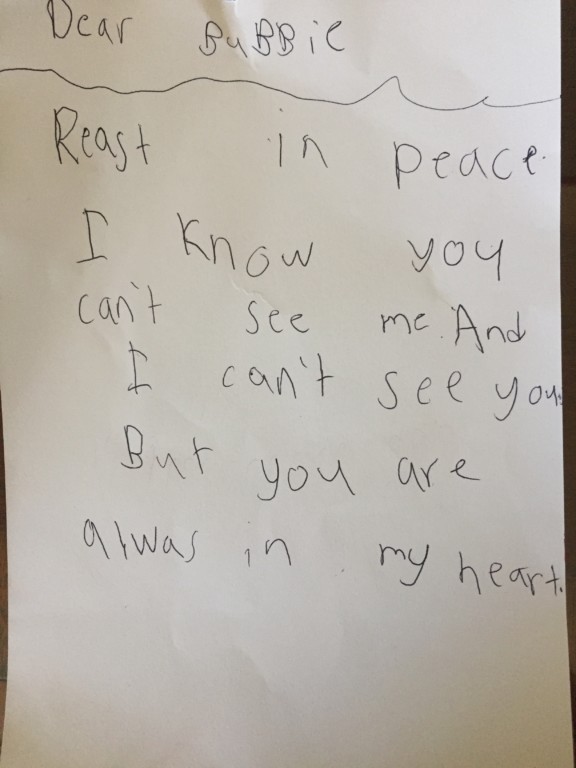 Taking a page from my own parenting book that I have never written, I sat Penelope down and, step by step, explained what the funeral would be like. I explained Jewish customs and cultures, the prayers, the casket, the mitzvah of putting earth in the grave, I explained everything.

I told her that some of us would talk about our grandmother and/or mother, and some would sit and sob. I told her some sobs would be loud and sound scary, while some sobs would be quiet. I explained that Bubbie was at peace and in heaven. I explained that Bubbie was not scared and she should not be either. I ended our discussion reassuring her that if at any time she did not want to go, or if she got to the cemetery and decided she wanted to leave, we would make that happen. {The hubs was basically on kid duty.}

As we approached the cemetery grounds, all the family began to cry. Penelope noticed and stayed quiet. As we got out of the car, she asked to see my Pop Pop {grandfather} who died before she was born. Per her request, my husband and I walked her and Pandora over to my grandfather’s grave. She placed a stone on his headstone and walked away. Technically, she and Pandora skipped to my grandmother’s grave site. SKIPPING in the CEMETERY. OY.

But it wasn’t an “Oy.” It was a smile. A smile brought to the few who saw them and knew they were being children. Children who are not quite sure how to grieve. Pandora asked me when Bubbie was coming to the funeral, why we couldn’t fix Bubbie, and when will she go to heaven. At that point, I was crying too much to answer, so Penelope did. She explained that Bubbie was really old and in heaven and that we can no longer see her, ever. Have {I mentioned how awesome Penelope is?}

During the service, all seven grandchildren spoke along with one of my aunts. What was so moving was each person’s emotions were stronger than the next, and each person’s story was more moving than the prior story. It was the most beautiful tribute to my grandmother, and my daughters were there to hear it all. They heard stories they had not known and even heard stories about themselves. It was amazing.

At the end, the casket was lowered into the ground, and my family walked to the grave to place earth on the casket. Helping to bury a person is one of the greatest mitzvot Jewish people can do, and my daughters, with pride, carried out this miztvah, this tradition.

In the word’s of one of my aunts, a child’s first funeral should be of someone they loved and someone that was old. It is the way it is supposed to be. Penelope and Pandora loved their great grandma; they will miss her forever, but they were given the gift to say good-bye. And that gift was not traumatic. That gift was beautiful.