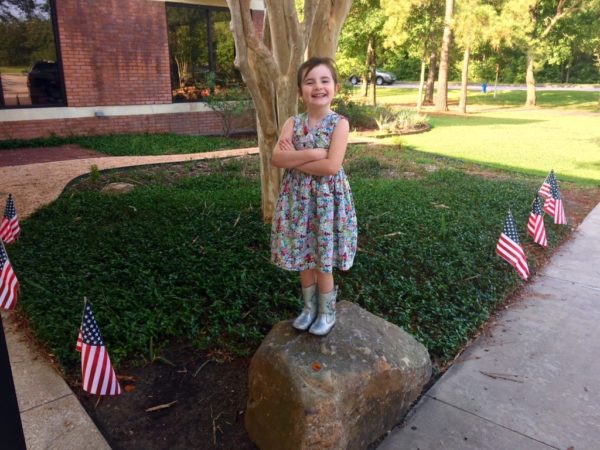 I’m pretty open about how I don’t really know what I’m doing when it comes to this parenting thing. I basically do a pretty good job at keeping my children alive, semi-happy and mostly nice to others. Anyway, I decided a long time ago there are some battles I am willing to fight and there are some battles where I will gladly throw the white flag. The big one in our house – I will NOT debate clothes. This is why, for nearly two months, my 5 year old wore the SAME EXACT DRESS FOR 45 DAYS STRAIGHT.

Discovered in a bag of family hand-me-downs, my 5 year old found a hidden gem and it was love at first sight. The floral, pastel puffy dress had colorful layers of material with a zipper going up the back, complete with a big bow. {Funny, because if I would have bought this sort of dress she would never have been so agreeable to wear it.}  While holding it up with a gleam in her eye, she immediately ripped off her clothes and put it on. Cool, I thought, we have a winner.

The next day, she wanted to wear the dress again. I gave it the good ole sniff test and checked it over for stains.

She gladly slipped the dress back on and skipped off.  That night I was doing a load of laundry and proclaimed that everyone strip down and give me their clothes {because, you know… then it’s the one time there is only clean clothes in the house if you do it that way}. The next morning all of the clothes in the house were clean, including the beloved dress. You can guess what happened next. She wore it again. Then, again. The dress became so popular it even got a name. We called it the “Aunt Kim” dress because we were with her Aunt Kim when she got it. No matter the load of laundry, I would always make sure the dress was included. Some days it wasn’t so clean – Let’s be real.

Days became weeks and people started to notice. “Oh, that is a pretty dress,” they would say with a side eye. Or, “Wow, she really likes that dress, huh.”

Sure, I felt the slight judgement. But did I care? HECK NO. This dress thing was turning into something GREAT for me. First of all, there was a lot less laundry. Also, my daughter was saving so much time in the morning. No debating over what to wear, trying on different shirts and throwing them in a pile, no changing several times a day…I am winning here. WINNING. I have found the key to a blissful morning and an agreeable child.

Then, one day at the park we frequent, I was sitting on a bench watching the kids play. A grandma I often see there came up sat beside me.

“You know, I wish I was more like you when my kids were little,” she said.

I looked around. Surely she is not talking to me.

“Yes. I would have never let my kids wear the same clothes for days and weeks in a row. I’ve seen your daughter wearing that dress for the longest time, right? Like, weeks?”

“You are teaching her so much by doing that,” she added.

She went on to say letting kids pick their own clothes gives them a sense of individuality and it helps develop their personality and gives them confidence. That wasn’t really what I was going for, but if it’s a compliment, I’ll take it.

One day, out of the blue, as fast as my daughter fell in love with the Aunt Kim dress, she decided it was too tight, itchy and uncomfortable and she would never put it on her body again.  She hated it. The love affair was over.

So, long Aunt Kim dress… you were good to us while it lasted.

I enjoyed a slight break in laundry and the ease of getting dressed in the morning, and the Aunt Kim dress taught me a few things in the end. It’s OK to just go with the flow on some things and heck, maybe I’m teaching them something in the long run. Or, maybe they are teaching me. 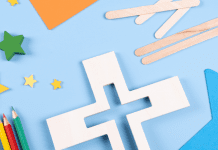 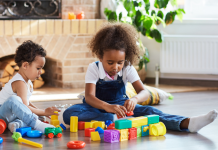