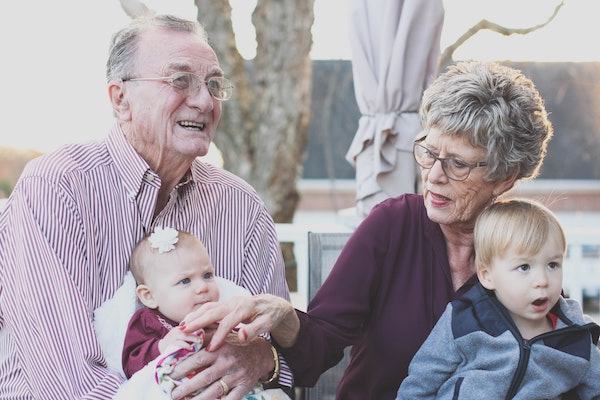 My whole life, I had three sets of grandparents :: one set on my mom’s side, and two on my dad’s side due to his parent’s divorce and remarriages. And out of all six grandparents, harsh as it may seem, I was really only close to one.

I was close to only one emotionally speaking, of course, not geographically. In fact, for most of my life, I lived far enough away from all of my grandparents that we saw them mostly just for holidays and not much else. My mom’s parents lived in the Woodlands, and we were in Cypress {this was also pre-Grand Parkway and many other nifty roads}, so they might as well have been as far as the other four grandparents that lived in the Northeast.

I was pretty close with my Nana {my dad’s mom}, and loved when she visited or when we went to see her. Our closeness especially grew, emotionally and geographically, during the years after my Pop passed away and she came to live in Texas for a while. Yet, even then, the “grandparent culture” in my family was pretty under-developed, so I never created much of a habit of spending significant time with her. The rest of the grandparents didn’t make much of an effort to have a close relationship, and I didn’t really either.

All but one of them has passed away now. Still, I have fond memories with all of my grandparents, despite the distance between us. I think of each of them often and, now that I’m older, I wish more than ever that they were around so I could really get to know them and be able to tell their great stories to my kids someday. I wish they would have been around more when I was younger. I wish they would have taught me family recipes, or introduced me to their favorite music and movies. I wish I remembered them pushing me on swing sets and taking me out for ice cream.

But more than ever, I wish for my kids to have all these things with their grandparents that I missed out on with mine.

Somehow, in this culture of moving away and spreading families across the map, we’ve all managed to stay together in the same city. Granted, Houston is vast, but we’re all within 30 minutes of each other and we all make a great effort to see each other frequently. My parents live the farthest from us, but still close enough that they watched my daughter almost every weekday for the first year of her life, and continue to watch her almost weekly. My husband’s parents live close, we attend the same church, and we see them at least once every week. Between the two sets of grandparents in our family, our kids will always have someone who will jump up to volunteer to push them on swing sets, and take them for ice cream.

The smile that lights up my little girl’s face and the excited tone in her voice calling out their endearing names as she runs into the arms of any one of her grandparents is exactly the way I hope she always feels about them. I’m making it part of my job as Mom to facilitate a wonderful relationship between my kids and their grandparents; truthfully, they make it so easy. We consistently go to their houses for home cooked meals and the very best snacks, play dates with the cousins, time to create and experiment with art, walks in the sunshine and trips to the park.

Despite what having grandparents meant in my childhood and adulthood, I’ve always known what it should have been. Now, I’m just so thankful for my parents and in-laws who will never settle for “should haves” when it comes to their grandchildren. They’re the kind of grandparents I wish I’d had.