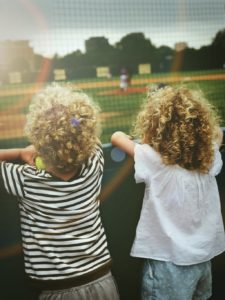 I am an accomplished physician, educator and researcher who, through a lot of hard work, has achieved just about every goal I have ever set for myself, but nothing, and I mean nothing, has humbled me like motherhood. The innate expectation of success that exists within me has quickly been reduced to an oftentimes very defeated mentality of “I’ll be happy with just C average in this motherhood thing”. Not a day goes by that I don’t wish I had a do-over, another take, or a best out of three, and I often find myself spending a lot of time reflecting on what I feel I have done wrong. I admit I do wallow in the mom guilt a bit too much at times, which is definitely something I need to work on.

But one thing I refuse to accept the proverbial “mom fail” in is how I am empowering my children, especially since I have girl/boy twins. Empowering them is an action that takes many forms, is a daily objective, and can be accomplished by seemingly mundane behaviors on my part as their mother. My goal is to make sure they are autonomous individuals and equals, both in their eyes and in the eyes of society. For me, this is possibly the most important role I have as their mother. 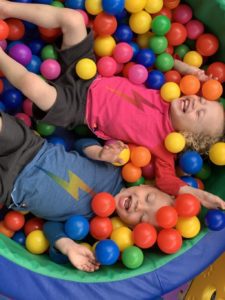 There are no princes, princesses, kings or queens in my house…

When I googled the definitions of prince and princess, besides the obvious meanings, this is what came up.

Prince–a man or thing regarded as outstanding or excellent in a particular sphere or group.

Now I grew up on Disney where most of the princesses were “saved” by a man, and I did not grow up to expect that a man should save me. I am very independent and never expected anyone to protect or take care of me or that I needed a man to make me a complete being. However, I feel that referring to babies, toddlers and children as a prince, princess, king or queen supports the stereotypical differences imposed on girls and boys by society, specifically places little girls at a disadvantage by expecting that they want to be viewed as beautiful, demure, and feminine beings, and quite frankly, is archaic. I do not want Sydney to be placed into this category, nor do I want Remy to place her or any other female into this category.

More importantly, I truly believe that something as simple as my referring to my daughter as a “princess” or my son as a “king” can have a more drastic consequence. I believe it can innocently make them view themselves as superior or inferior to one another or others. In a world where many people want to be better in some way than the next person, and where persons of different religions, races, ethnicities and sexual preferences are attacked daily by people who view them as the lesser being, I feel am doing my part to make sure they know that mommy sees them as equals. My view of them has a significant role in how they view themselves. 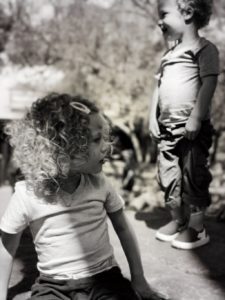 Once I had the twins, I instantly had a much greater appreciation for moms who have the “Look, but don’t touch!” approach when it comes to their babies. I was never one to scoop up and cover someone else’s baby in kisses anyway, but I definitely didn’t want anyone doing that to my preemie twins. Maybe it was the doctor in me who worried about the rare event like them getting HSV {herpes} through an innocent kiss from a friend or family member, but whatever the reason, I was insistent that no one, not even myself, kiss them on the face, and especially the mouth, when they were babies.

Now that they are 2 ½ years-old, I actually still take that approach. I don’t expect or make them kiss or hug anyone—not me, not my husband, not grandparents, not anyone. In fact, I ask if I can kiss them and if they want me to, they lean in with their foreheads for a kiss. Now this may seem weird or extreme to many, but to me it makes sense. I feel that making children allow people into their personal space through a kiss or a hug at a very young age when they don’t want to or aren’t comfortable sets them up for allowing it when they are older.

It is very important for children to learn at a very young age that their body and personal space is theirs. Kids know who they feel comfortable around and who they want to show affection to so who am I to make them allow someone they don’t know well into their safety zone or force them to “be nice” by giving someone a hug or kiss? I want them to take ownership of their bodies and feel comfortable saying no to anyone—even me. I believe that being polite or nice does not require physical contact; it is a measure of tone, words, actions and body language.

This doesn’t mean I am not affectionate with them or I don’t ever kiss them on the face. In fact, I am very affectionate with them, and we have a very loving relationship. But I respect their personal space, and I allow them to tell me no. Empowering them to have the autonomy to express how they feel and what they will allow starts very early and it is my job to ensure that my children feel that mommy supports them. 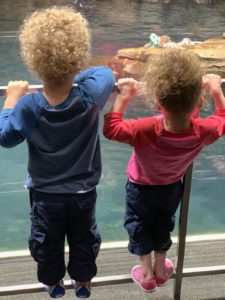 I dress them similarly…

When I was pregnant and on hospital bedrest for two months I had a lot of idle time on my hands. This meant a lot of Judge Judy, a lot of napping, and a lot of online shopping. I bought tons of clothes for them over those two months, and although I am not a very “girly girl”, I bought Sydney many cute backless rompers, sundresses, and skirt and short outfits. But when it came time to put her in those cute, girly outfits, I couldn’t.

When I dressed my boy/girl twins, I found that I couldn’t dress him in “boy” clothes that fully covered his body and put her in “girl” clothes that would leave her legs, back and/or shoulders exposed. As odd as it may seem, dressing them made me realize just how differently society, and especially clothing retailers, expect boys and girls to be. Girls’ shorts are for the most part wide-legged and short, whereas boy shorts are long. Girls’ tops are cut shorter with shorter sleeves, and girls’ rompers are largely backless and barely go past the butt.

How could I have my little boy fully dressed and his sister exposed?

I simply didn’t want her to feel different than her brother, and I didn’t want her to learn that girls are expected to dress differently than boys. After much thought, I concluded that sexualization of little girls and certain inequities between men and women start very early, and how we dress them may play a role. This was something I had never even thought about until I had children, but the simple act of dressing my boy/girl twins made it obvious to me. More importantly, I am their mother and play a crucial role in making sure they know they are equals, both as brother and sister AND as human beings–and I believe it starts with something as simple as how I dress them.

What are some of the ways you are empowering your children? 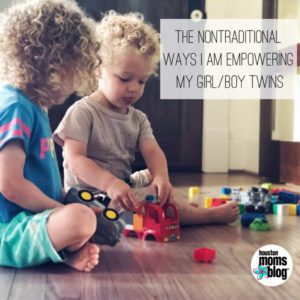