Growing up, I thought that the phase of a woman’s life often referred to as “The Change” – also known as menopause – was frightening. Shrouded in whispers and innuendo and accompanied by old wives tales, the only thing I really knew {or thought I knew} about menopause was that every woman goes through it and she’s hot, sweaty and cranky most of the time. Since then I’ve learned a lot about the subject, through personal experience and I think it’s time that we have an honest conversation, out loud with no whispering. 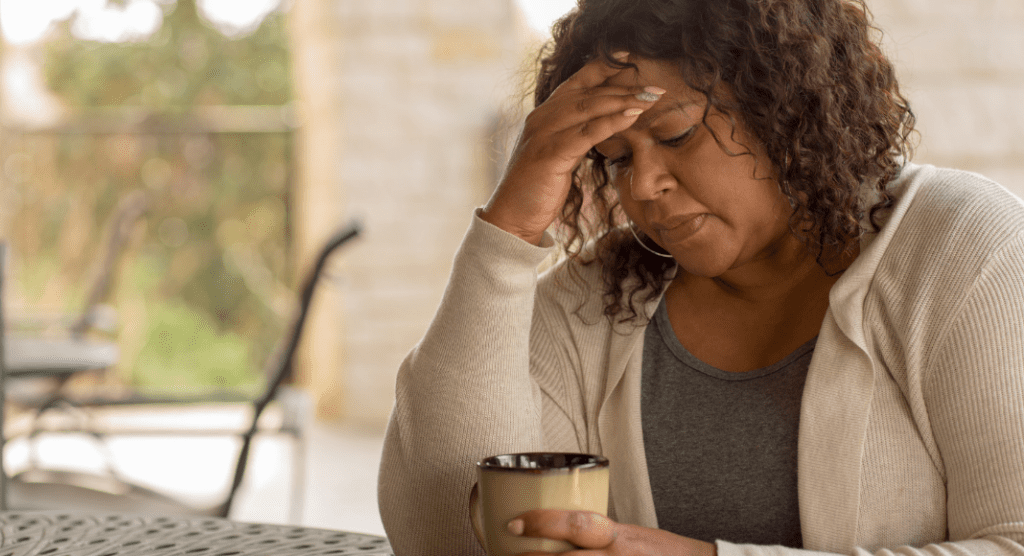 Like most things in life, every woman’s experience with menopause is different. However, there are a few common threads for most of us, including, but not limited to a slower metabolism resulting in easier weight gain and a drop in estrogen often leading to thinning hair {that one really bothers me}. One of the things I was most unprepared for were mood swings. My menopausal journey started nine years ago when I was 45 and the mother of  five children ranging in age from twenty-one to four. I’m a stay at home mom, my husband often traveled for work so, as you can probably imagine, life was often chaotic. A little irritability every now and again would have been expected, but what was happening to me was something very different. I could feel my mood changing, almost like a wave washing over me, not aggressively, but thoroughly and once it was bad, there was no getting it back. My youngest two children were eighteen months apart and I was having difficulty maintaining my patience and mood to effectively interact with them. Ultimately, it was my discomfort with being uncontrollably testy that drove me to my doctor.

While in the doctor’s office, I recited my experiences with moodiness and a few lesser challenges like a couple of missed periods {which was notable because for all of the years that I had a menstrual cycle, I only missed when I was pregnant and sometimes not even then until I was into my second trimester}. She listened patiently and nodded her head as her face settled into what was a cross between understanding and pity.  After asking me about my sleep habits {Sleep? What is Sleep?} and a few random health related questions, it finally hit me and I asked, “Could this be menopause?”  to which she nodded and replied “The beginning, peri-menopause.” I was at once relieved to know that I wasn’t losing my mind and a little apprehensive because I actually knew very little about the reality of being a menopausal momma.

Hot flashes! Definitely the most talked about symptom of menopause. With everything that has been written about it, I thought I knew what to expect. I was wrong. To be clear, it is easier to sweat while in any stage of menopause – perimenopause, menopause or post menopause – and it can be triggered by anything, like anxiety, exercise and alcohol {I’m sorry}. Just know that you’re going to be sweatier. However, not every woman experiences a true hot flash, which is the result of hormonal fluctuations. I’ve only had three real hot flashes during my journey and years later, I remember each one in detail, but I will only share with you the first one. My husband and I were out shopping and while he browsed shirts in a men’s store, I stood a few feet away looking at shoes. Suddenly I felt tired and I put down the bags I had been holding and leaned against a clothing rack. The only way I can describe what happened next is to have you think about a furnace or a pot of water, put on to boil.  The fire is struck and it starts to build in the core of your body, rising slowly toward your head.  I was visibly sweating {beads of sweat rolling down my face and back} and it lasted maybe 3 minutes. I called out to my husband asking him if I looked okay.  He said I looked like I was melting. I felt like I was melting, too and when I got home, I took a shower. A true hot flash is intense and it’s nothing like anything you have ever felt. As if that’s not enough, it can also happen at night while you’re sleeping.

If hot flashes are the star of the show, night sweats are the annoying little sister. Picture this:: you’re ready for bed wearing your cute and comfy jammies or pretty night gown, with your freshly washed and moisturized face and ready to settle in for a good night’s sleep. A few hours later you wake up hot and sweaty – like really sweaty, with damp night clothes and bed linens – throw off the covers to cool down and fall back asleep. Then, a little bit later you wake up again, but this time you’re freezing because, of course, your pajamas and possibly your sheets were wet. Fun, huh? After a night of repeated cycles of this scenario, I woke up looking like a wet cat – a grouchy wet cat.

Perhaps the least talked about, but most troublesome {at least for me} aspect of menopause is how it changes physical intimacy.  Since the body produces less estrogen during menopause and age naturally brings about lower testosterone levels, the combined result can lead to a less than spicy sex life. Quite honestly, I was unaware and completely unprepared for how abruptly things changed and so was my husband. To make matters worse, it’s not easy to talk about – even with your partner – because NO ONE wants talks about it. Additionally, society often tells about what happens to men and their sex drive as they get older. In fact, look at all of the product commercials aimed at helping male performance as they age. However, rarely do we hear about these changes and products for women. Quite honestly, even though he’s been my husband for almost twenty years, I was embarrassed.

All of this is perfectly normal and very frustrating. Truth is that menopause can result in sexual intimacy becoming uncomfortable, less spontaneous and sometimes painful. There are ways to handle this situation, but you need to be able to at the very least talk to your partner for their understanding and support. Most symptoms can be treated with prescribed hormone therapy in the form of pills, patches, creams and suppositories. It’s up to you and your doctor which form works best for you. If you think your are not quite to the point of needing prescribed hormone therapy, there are over the counter estrogen supplements that may be able to help.

There is Life After Menopause

Chin up because all is not lost! Trust me, there is a light at the end of the tunnel and it doesn’t always end in a hysterectomy {another word that people tend to whisper}. While some of us will naturally enter and exit menopause without much hoopla, others of us will need a bit more attention. I had a hysterectomy four years ago and, honestly, I wish I’d have done it sooner.  Life changing, yes, but not nearly as scary as I thought it would be. I had ovarian fibroids that caused me great pain and heavy bleeding resulting in my doctor suggesting that it was medically necessary. I have no regrets and it made my transition to my post menopausal life much easier, albeit abrupt. Not sure why this is such a taboo topic but, I’m here to tell you that I’m feeling pretty fine these days.

Listen, ladies, there is no shame about when discussing what happens normally in our life cycle. If there is one gift I intend to give my daughters, it’s the confidence to embrace, appreciate and care for their bodies at every stage of life. Menopause happens and it’s really not the end of the road. In fact, in many ways, it’s just the beginning. My husband and I often joke that we no longer have to worry about adding to our family {surprise!} and freedom from ever being caught off guard by “aunt flo” is a beautiful thing.  So, stop whispering and embrace The Change. 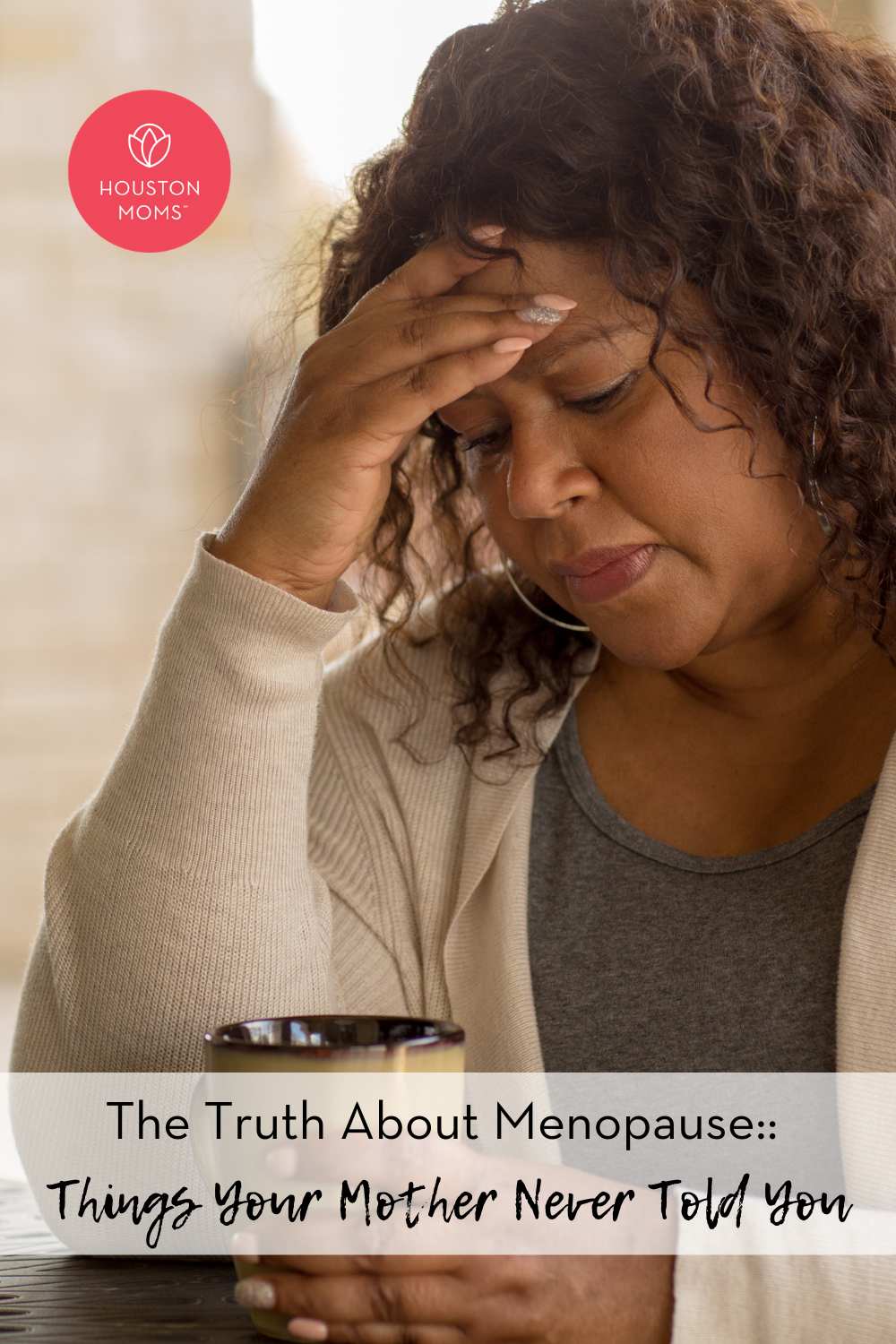