The first time I ever lived alone was in 2000, my first year of law school. My clothes were arranged by color in my closet, my towels were neatly hung on the towel racks in the bathroom with the seams perfectly aligned. I made my bed every morning and folded my blue chenille throw neatly across the back of the couch each night before bed. The dishes were cleaned and put into the dishwasher as soon as they were dirtied, and with the exception of the occasional dog toy left carelessly on the living room floor by my sweet dachshund Phoebe, my surroundings were picture perfect.

I had coffee table books…on a coffee table. And those books were always neatly stacked with the spines facing in the proper direction.

I went to bed at 9:30pm and woke up at 5:30am, worked out, took a shower, ate one egg, one granola bar, and one fruit cup before heading to school to study until class began. My life was regimented and gloriously under my control, or at least I thought it was. And it felt good. It felt very good. All of my little I-got-this endorphins fired off like effervescent fireworks, spreading their happy magic all over my little world.

I think back on that apartment and my time there, the way the light would shine through the windows and fill the room all the way to the vaulted ceilings, highlighting for me as it spread around the apartment that everything was in its place, as it should be. I felt completely in control.

I had my oldest son at 28, and with him came the neverending stream of baby equipment, filling up any empty corners and dotting the landscape of my perception with discarded burp rags and onesies in need of laundering.  Then came the baby toys, the activity centers, the play gyms, the board books, and the stuffed animals. I stared in baffled wonder at catalogs from The Container Store, with its “organization solutions” that promised a sense of order that seemed out of reach.

Somewhere along the way, the necessity of a play room became apparent so that some semblance of order could be preserved in their bedrooms by confining the majority of the detritus of childhood to one room, and fast forward to now, when that play room is full of toys for both boys and girls ranging in age from newborn to 11 years old. Decluttering {oh, what a fantastically elusive concept that is} is pointless with such a broad age range because as soon as one child outgrows a toy, there’s someone in the line-up who is just about old enough to begin to enjoy it, and frankly, I haven’t made a decision on whether there will be any future little people to pick up any slack. 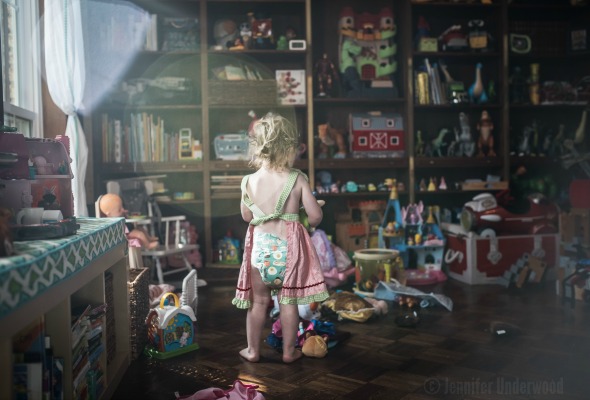 We basically live in a perpetual state of disarray. I will occasionally wander into the playroom and start sorting things just to have a momentary sense of order and see if I can get any of those little control endorphins to smolder. I’m always behind on laundry, and the sheets aren’t changed nearly as often as I would like. I step on Legos, I sit on metal airplanes tucked between the couch cushions, and I swear headless superhero figures follow me around and throw themselves into my path just to freak me out.

But do you want to know the craziest thing?

I have developed an affection for the clutter that I never imagined was possible. When I walk into a room and see a princess playhouse filled with dinosaurs and baby dolls covered in Minecraft figures, my heart swells with all of the mystery and fascination of childhood that unfolds in my very own home. There is magic here! There is magic here, and I get to be a witness to it.

When I round the corner into the playroom that was relatively tidy a mere half hour ago and see the shelves half-empty and the floor barely visible, sure there’s part of me that says, “Well they trashed the playroom quickly,” but then there’s my unmistakable smile, the smile I can’t keep hidden, because my home is alive. It is alive, and full to overflowing. And there is joy here!

I know a day will come, long before I am ready, when I will open the door to a bedroom and find it just as it was when I last shut it, and my heart will no doubt break, as I will wish to tread on a tiara or feel the sting of stepping on a Hot Wheels car yet again.

I used to snicker when I saw those quaint little “Bless This Mess” signs at places like Cracker Barrel and little country stores. But now I understand…I completely understand.

Bless this mess, oh Lord, this glorious mess, for which I am eternally grateful. I have no doubt I will miss it one day.

9 Lessons on Motherhood from My 99 Year Old Grandmother