It has been two weeks since the floodwaters ravished our city. Two weeks since so many of our neighbors lost every single belonging in the blink of an eye.

And two weeks since my eyes were opened to the power of communities coming together to help both their friends and complete strangers alike.

In the wee morning hours of May 26th, my husband and I peered out of our front windows to watch the river that was forming in our street creep onto our front lawn, and almost touch our door. It was scary to watch. Growing up in Houston, neither one of us were strangers to rain and/or flooding, but this time was different. As I awoke that Tuesday morning to messages of schools and offices being closed, I began to realize just how different this flood was. A 500 year flood was wreaking havoc minutes from our home. I knew the need for assistance would be tremendous. I spent the day cleaning out my closet and ended up with three large trash bags of clothes to donate. I casually posted in an area moms and ladies Facebook group I was a member of asking where to send the donation. By the end of the day, this group was networking within itself offering clothing donations, warm food, comfortable places to sleep, manpower, and so much more. People were reaching out to complete strangers offering necessary, and hard to come by, assistance. In Hebrew, there’s a term from the Passover holiday, Dayenu, that translates to “it would have been enough.” Had the group stopped at just this, at the immediate response and offer to help, it would have been enough {or, Dayenu}.

But this inspiring group of women didn’t stop at that. They set their sights on much more in regards to flood victims, and they continued to spread the love. 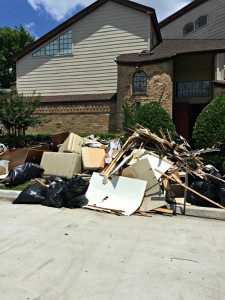 After seeing this outpouring of support, a group member began a separate Facebook page solely for the purpose of posting resources, support, and needs. A group that was intended to serve 40 or so members rapidly grew to over 3000 members. 3000 people in the affected areas wanting or needing help, and 3000 people willing to be vocal about both. In the following days, the members of this and the original moms and ladies group hit the ground {literally} running. We went door to door with bags of cleaning supplies, food, cases of water, gift cards, boxes, the list goes on. Team captains were assigned to designated areas of need {ie: clothing, food, manpower, household items}, and those who were in need were immediately connected with exactly what they needed in that moment.

In those few days when this was all coming together, I became infatuated with the power of social media. Someone would post something similar to; “I need help moving damaged furniture to the curb. Can anyone come?” And within minutes you would see responses of “Yes” or “On my way!” Complete strangers showed up at houses with a willing and ready attitude to tackle whatever challenge the victims needed. The way neighbors came together was incredible. If it had just been people helping people, well, Dayenu.

But it didn’t stop there. 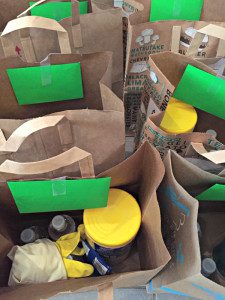 Church groups got involved, the Jewish Community Center became a hub for drop off and distribution, and nearby businesses began to offer discounts. Restaurants {HUGE shoutout to Snap Kitchen} donated meals to be delivered. Car dealerships, furniture stores, dry cleaners, you name it – the entire city was coming together. A kumbayah moment, to say the least.

When you see such awful tragedies in the media, too often we watch horrific acts of looting, riots, or violence taking place.

Not here. Not in my city. And certainly not in my neighborhood.

The few a**holes {excuse my French} who attempted to loot were quickly reported, pictures of their license plates were posted on social media, and a neighborhood watch type program protected everyone involved.

Houston isn’t exactly known for having a small town feel. I wouldn’t say it’s the most “neighborly” place, but my heart has been overflowing with the acts of kindness I have witnessed in the last two weeks. It’s easily enough to cause one to get choked up, but more than that, it became infectious. People who don’t typically reach out or volunteer were finding themselves getting involved and forming new friendships. What started out as what can only be described as absolute devastation grew into something so incredible.

Had just the donations been made, Dayenu.

Had neighbors just been there to lend an occasional helping hand, Dayenu.

But with an open heart and an outstretched hand, a local group of women were able to accomplish so much more than that…all when their neighbors needed them most. 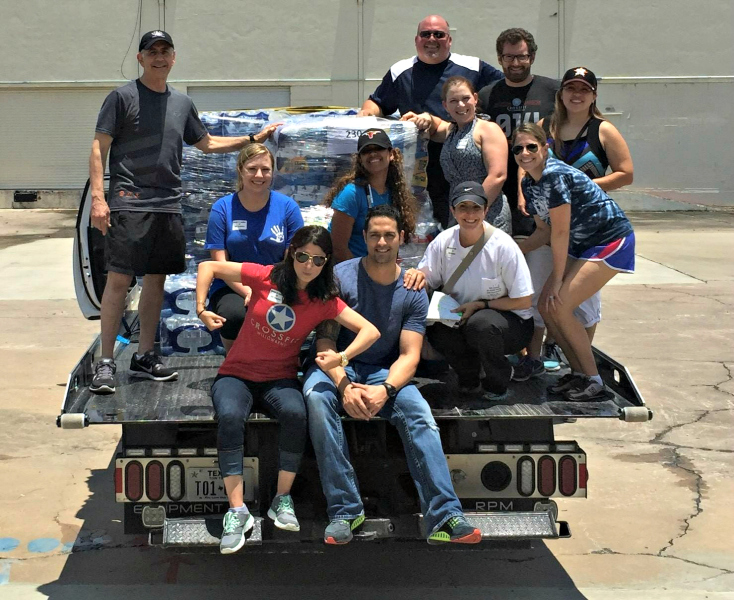