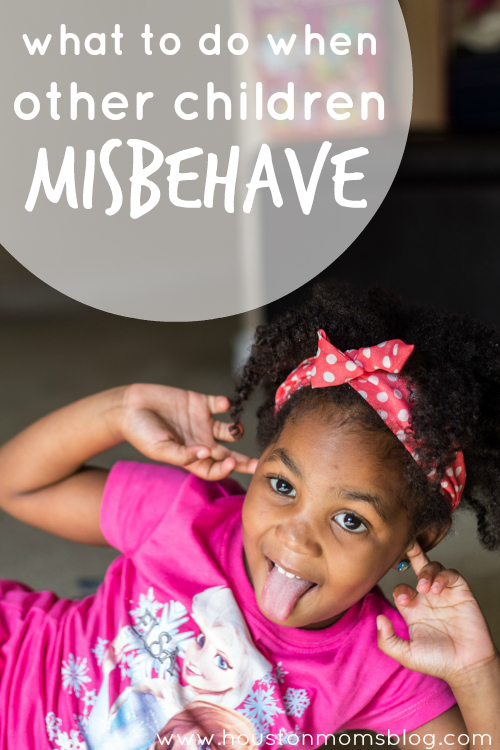 With the weather warming up and blue skies here to stay, I’ve found myself out and about with Skeeter more frequently.  We spend a lot of time at the park and on weekend play dates with friends.  And the more we get out, the more I run into misbehaving kids.

I don’t expect children to behave 100% of the time.  Anyone who saw me standing in front of the grocery store with a toddler screaming “no store!” yesterday would know that I’m not the perfect mother and my toddler definitely acts out.  But when we’re in public places, I make an effort to ensure my child isn’t negatively affecting others.

All too often, I find that when the other child is misbehaving, the parents are nowhere to be seen.  So, the question is raised…

“How should I react when another child is being mean to mine?”

Recently, we were at a local playground and the kids were running around calling each other names.  I really didn’t pay attention until they were also calling my child names.  At that point, I just chose to smile and say, “Oh, that’s not her name!  Her name is Skeeter.”  I made it as if I was introducing her rather than correcting them.

A few other times, I’ve made the statement, “Well, that’s not nice.”  My statement isn’t necessarily intended to admonish the other child, because that’s not my job.  It is to let my child know that I recognized the behavior, and I don’t want her to act the same way.  If the other child overhears and corrects their behavior, well that’s just a bonus.

However, most recently, we were on a play date with my college roommate and found ourselves in a different situation.  We brought Skeeter and her infant to a play place that had a separate section for children aged 3 and under.  Some parents were allowing their children, who were much older than the cutoff, to play in this section.  Had they been playing nicely, I wouldn’t have had an issue.  But the older kids telling my child to get off a toy is inappropriate.  Even worse?  The parents were taking pictures of their children misbehaving, instead of correcting them.

In all fairness, my child also misbehaved.  She told another child to stop playing with a toy and swatted at him.  The difference?  I put a stop to it.  She had to leave the toy and apologize.  I don’t expect perfection, just effort on the parents’ behalf.

In this situation with the other parents, I found myself speechless.  We ended up leaving the area since the behavior continued with no sign of intervention.  But now I’m curious as to how I should have acted.  So instead of being the informer and creating a nice, pretty bullet list of things to do, I am turning the tables and seeking your advice this time.  My hope is that this will create an open and honest {yet still kind and purposeful} dialogue in the comments below as to how we should act when other children misbehave.  Fellow moms, please share your thoughts…

How would you react to a child acting poorly toward yours?