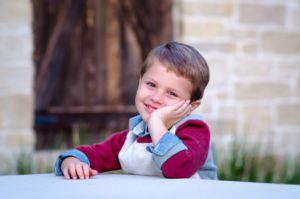 Once upon a time, there was a superhero named Connor Man. His real name was Connor Michael Olympia. On his first day of pre-school, he told his teacher he wanted to be Batman when he grew up, and that’s how he became Connor Man. His mommy, Alexis, and I met in college, and we spent a few fun years hanging out and going on Spring Break trips together. As time went by, we lost touch, but we would hear about one another through mutual friends and social media.

One terrible day, almost four years ago, I woke up to a text message from our mutual friend that said Connor Man had developed a brain tumor that was inoperable, and that it was terminal. There was no known cure, and he only had a few months to live. From that moment on, my perspective of life changed forever. How could a beautiful four-year-old boy have brain cancer? How is it possible there is nothing that can reverse his prognosis?

It turns out his specific type of brain cancer, Diffuse Intrinsic Pontine Glioma {DIPG}, is the deadliest form of childhood brain cancer. There is no effective treatment, and the prognosis for a child diagnosed with DIPG is the same as it was for a child diagnosed nearly 40 years ago. Alexis and her family feel that this is unacceptable and must change. DIPG affects children exclusively, and the age range spans from 4-11. Nearly every day, one child is diagnosed with DIPG, and every day one child dies from DIPG. The median survival rate after diagnosis is just nine months.

DIPG is an aggressive tumor that interferes with all bodily functions. Within five days, Connor lost his ability to move, talk, eat, and swallow. As the tumor grows, it puts pressure on the nerves that control essential bodily functions that are regulated by the pons – located at the base of the brain. As the tumor progresses, it also interferes with breathing and heartbeat, which ultimately results in the child’s death.

Soon after Connor Man began pre-school, he was exhibiting flu-like symptoms for several days, but did not get better. After three trips to the ER and one MRI of his brain, doctors confirmed that he had DIPG. Alexis had never heard of it before. And just like any mother, she didn’t want to believe that she was going to lose her little boy. She wanted her circumstance to be that miraculous story you sometimes hear about, where her son defied all the odds and came out the other side of one awful nightmare.

Alexis and her husband, Peter, opened a Caring Bridge page, and kept family and friends up-to-date on Connor Man’s courageous fight. I would read almost every entry they wrote. Their words were so eloquent, full of hope and strength, and most of all, full of love. My heart broke over and over again following their story throughout Connor Man’s 10 ½ months, from diagnosis to the very end. 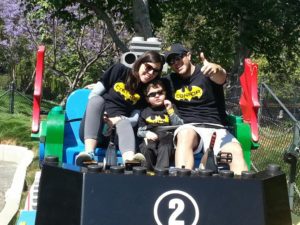 Their story was a constant reminder to me to be so thankful for the health of my child. My son, Mayer, was only about 18 months old when I first heard about Connor. I remember staring at him all the time and wondering how I would ever go on if something similar happened to him. It’s one of those things that you never anticipate would happen to you. And it’s definitely one of those things you can never prepare for. To lose a child is so unnatural, and so out of your control.

As a distant friend, I wasn’t sure how I could help. I only knew that I needed to keep reading their story as it developed, and send as many positive and loving vibes as possible in their direction. Connor Man lived and fought much longer than the doctors had ever predicted, but he ultimately gained his angel wings on October 29, 2015 – just weeks shy of his fifth birthday.

Although I had never personally met Connor Man, I decided to go to his funeral to support his mommy. I will never forget that day. Alexis had just given birth to Connor Man’s baby brother, Ryan, only six days after Connor Man passed away. I still shudder when I conjure up the image of Alexis holding her newborn baby boy, and walking behind the casket of her first baby boy. It was the most heart-breaking thing I’ve ever witnessed, and I so badly wished this would not be her reality.

Alexis and Peter promised Connor Man that they would continue his fight to find a cure for DIPG. Even if they couldn’t save their little boy, they would honor him by doing everything in their power to make a difference for other children and families who are faced with this devastating cancer. They established the Connor Man Defeat DIPG Foundation to raise awareness and research funds to study these monstrous tumors, and ultimately find new ways to treat and cure the disease. Currently, the amount of government funding allocated towards the research of all childhood cancer is less than four percent. As Alexis says, that is not enough to “move the needle,” and it’s their goal to be able to make that happen. Right now, nearly all of the research money is coming from charitable foundations such as theirs.

While Alexis works on several fundraisers each year, Peter sits on the board of the Defeat DIPG Network. In December 2017, the Defeat DIPG Network awarded one million dollars in grants for DIPG research. Despite past statistics, there is hope. Alexis and Peter have reason to believe that there will be a cure for this disease, and they strongly feel that research is the key. Besides caring for their two living children {they gave birth to baby girl Grace five months ago}, this fight is the main thing that keeps them going each day. Alexis said, “you have to have a reason to keep going, but also to do something that is greater than you.”

What Can I Do to Honor Connor’s Life?

Besides attending as many of their fundraisers as possible, and bringing more people in to hear their story and be part of their mission, I wanted to know how I can help as a friend. It took Alexis some years of grieving and a lot of thought to figure out the answer to that. She said for her personally, it helps when others speak Connor’s name. To talk about him all the time, and not avoid bringing up stories or funny things he would say. For any parent who has lost a child, not just from cancer, she advises friends to follow the lead of the bereaved parents, and to keep the dialogue open. She also said just being there makes a big difference.

This week, Mayer started Kindergarten – a milestone all parents look forward to. Despite what a happy and proud day it was for me, I felt a pang of sadness for Alexis. She was supposed to watch her first child begin Kindergarten. She was supposed to witness all of Connor’s milestones. Every time something big happens with my children, I am reminded of Alexis and Connor, and I think about how fortunate I am to get to experience them. Alexis mentioned that every day is hard without Connor, but that it is especially painful when each new school year begins. At this time of year, she receives lots of text messages from friends who are feeling what I feel, and they just want to send her some love.

As Alexis often says, her pain only gets worse and the road only gets harder as time goes on without her precious boy. It’s not always easy to make sure her children know and talk about their brother on a daily basis. Or to tell people she is just meeting for the first time that she actually has three children, and not two. But it’s also important to her to keep him as a constant and present thought as she continues her life, because he’s a part of who they are. Thinking about Connor Man and how inspiring he was before and during his illness will always be Alexis’ motivation to continue fighting and being part of the change.

To learn more about Connor  and DIPG, please visit their foundation web site at connorman.org.

Childhood Cancer Awareness:: How You Can Support the Cause

Beating Cervical Cancer:: The Strength of a Mother