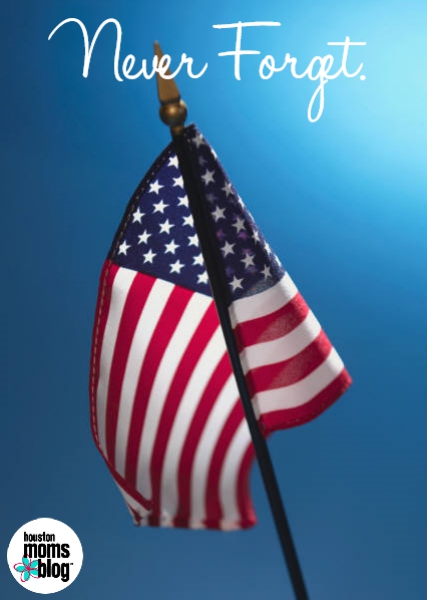 I sat alone, in my grandparents’ family room, watching the smoldering North Tower against the New York City skyline when suddenly, and shockingly, WTC 2 was hit. In that moment, there was no longer a question of whether this was a fluke accident, or a terrible mistake. This was an act of terror. Our country, the ever beautiful home of the brave, and land of the free was under attack. I can remember wondering even then, at barely seventeen years old, how people would ever responsibly bring children into a world where something like this could happen. Maybe it was because one of my high school classmates lost her stepfather who was conducting a seminar in Tower 2, or that a man who was a parishioner of the church I regularly attended while growing up was on one of the planes, but I definitely maintained that mindset for a very long time.

At 38 weeks pregnant, I had been suffering from mild preeclampsia for over a month, with a week in the antepartum unit and trips in and out of Labor & Delivery testing every other day for over a week. When my platelet count began dropping rapidly and I began showing signs of HELLP syndrome, my OB decided it was “go time.” I was told to call the morning of September 9th to find out what time I was to come in for my induction the next day. As soon as I could, I called in and was advised to call later, that Labor & Delivery was extremely busy. Time passed, and my anxiety grew as I was again told to call back later, and later again. By 10pm, I was in tears, my blood pressure was skyrocketing, and nightmares of a day nearly eleven years prior flooded into the forefront of my mind. I was abruptly confronted with the possibility that I would be delivering a baby on September 11th.

3:33pm, September 10, 2012, a 7 pound, 5 ounce baby girl entered the world, and in that instant, I knew it wouldn’t have mattered if she had been born on September 11, or any other day, quite frankly. The fact was, American babies — sweet little pink, brown, black, and tan babies — were still being born. Sure, this was a country that had suffered an unimaginable blow in the form of an absolute sucker punch, but we had resolve, and thankfully, the fortitude to continue moving forward after such insufferable hurt and heartbreak. No matter the depth or severity of the wounds that our country suffered on that unseasonably warm Tuesday in September, neither the miracle of life, nor the joy of living in this country could be snuffed out.

Thirteen years later, it’s hard to believe that most of the students that I teach on a daily basis were either unborn, or have no recollection of the events that have shaped life in this country as we know it. As parents and educators, and those who mold young minds, I hope that we would allow our wounds from that day to heal, but that we would never forget. I hope that we would impart the significance of 9/11 {where we were, what we felt, what happened} to our children when they are of an appropriate age and maturity level, that we would celebrate and respect our first responders who give so selflessly every day, and if even for just a day, lay down our partisan ties, soften our hardened hearts, and stand together, as one Nation under God, indivisible.