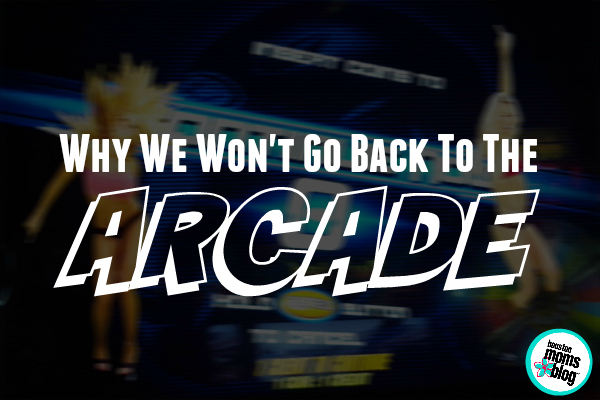 I never really cared for arcades – or video games in general. As a former high school teacher, I can recall countless parent-teacher conferences in which students were failing my class because of their after-school video game addictions. Instead of doing homework, they opted to live in false realities, where car theft and massacres often were commonplace. As a parent, I have long refused to ever own a gaming system, a hotly debated topic with my husband.

Despite my stance, however, I recently took my kids to an arcade. While my daughter went bowling with friends at a birthday party, I settled my three-year-old son on what appeared to be an innocent motorcycle game, which included a race down a two-lane mountain road. It gave no indications of scandal or foul play, but when my son crossed the finish line, my jaw dropped as I watched two very real looking girls in sports bras and booty shorts doing what I would deem a stripper dance. The performance went on long enough for me to freeze in shock, remove my son from the ride, shield his eyes, get my phone out of my purse, turn on the camera, and still capture a little snippet on video.

I guess it was some sort of congratulations dance? But who in their right mind would think that would be appropriate for a child? Whatever happened to confetti? It was a very far cry from the Pacman or Mario Brothers I knew.

What was most alarming, though, was that my son wasn’t the only child there. Kids were crawling all over the arcade, many of them under the age of 10. I saw two daycare groups walk by. Would their parents even know what they saw that day?

The arcade required no minimum age. The game had no parental rating sign. Anybody, including the daycare kids whose parents weren’t there, could play it. So despite my best efforts, my son openly encountered everything I have tried to protect him against. My friend with me said her two-year-old daughter saw the dance and tried to imitate the moves.

Disgusting. What kind of example does a game like that set for our young sons? For our young daughters?

Which is exactly why this must come to an end. How can our culture change when we treat this type of objectification as normal and all right for children to see?

A virtual lap dance for winning an arcade game? Get real.