I would love to say that I never thought I’d be “that” mom, but frankly, I have parented for the past 11 years as “that” mom. My husband and I decided when our kids were 8 and 9 that they needed phones. Both kids were involved in activities that took them away from us for hours at a time each week, and they were “drop off” situations where we didn’t stay with them – it just made sense for us.

My original intention was to get the disposable phones, and we did that for awhile. We paid $80 for the actual phone and $15 for 30 minutes pre-paid talk time. That worked very well for what we needed. The phones made/received phone calls and text messages. When practices ended early or bumps/bruises occurred, we could be reached and arrangements made. 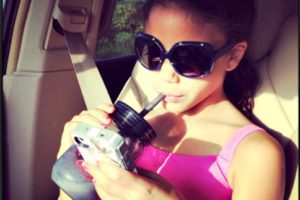 That is … until I found out from my phone carrier that the kids could be added to my cell plan and receive iPhones for free. I won’t say that we jumped at the idea. We had a family-shared iPad, the kids already shared a Kindle Fire, and my husband and I already had iPhones that were loaded with apps the kids used constantly.

But the biggest reason to go with the iPhone was an educational one. My son, a 6th grader with a heavy AP class load, takes pictures of the white board in his classroom when there are more notes than he can get written down. It’s a life-saver for him to be able to refer back. Both our junior high and elementary school use Edmodo, which is similar to an online forum where teachers and kids can communicate about lessons. And Edmodo has an app! Even our school district has an app that allows the kids to check their grades in real time.

With any technology in the Click house comes a set of rules and consequences. {Like this great Cell Phone Contract put together by Melissa.}  For my husband and I, the biggest rule is that we have all passwords at all times. We also have the kids’ photostreams connected to ours with Apple Family Sharing. Also, no Facebook, no Snapchat, no Kik, and no other apps that aren’t approved by my husband or me. Texts are not allowed to be deleted. I look at the phone every night – web history, texts, etc.  I also use Verizon’s FamilyBase. It sends a summary every week letting me know who the child received calls and texts from and the number/minutes used.

And, I won’t say that the phones are all educational. Of course, there are a ton of games, photo editing, and fun apps that are on the phones too. The kids don’t have the latest and greatest iPhones. They have iPhone 5s – the hand-me-down phones from when my husband and I got the iPhone 6 last fall.

It’s been 3 years now since we started on our “Kids With Phones” adventure. Would I change it? No. Do I think they got a phone too soon? Given our activity-driven family, no. Do I regret going with an iPhone {or smart phone}? Absolutely not.

Every family is different. If my husband or I didn’t work, if the kids weren’t involved in “drop off and leave” activities, or if there was a level of immaturity or a lack of responsibility – this would not have been the solution we would have sought. It’s been 3 years, and we’ve never had a cracked screen, a drop in the tub, a lost phone, or a problem of any kind brought on by roughness or disrespect for the device. Not many can say that. {Knock on wood!!!}

So, I’ll take the dirty looks and the whispers … I made the right decision for me!