I’ve let it be known that I am not crafty.  So I appreciate those that take advantage of my want to document but lack of craft paper.  When I was pregnant, I got three pregnancy journals.  And I wrote in them!  I took weekly pictures and measured my belly growth and weight gain and how my feet slowly disappeared under my bump.  And it was nothing more than a few scribbles in a notebook.  That’s the most I could handle with all the learning I had to do. 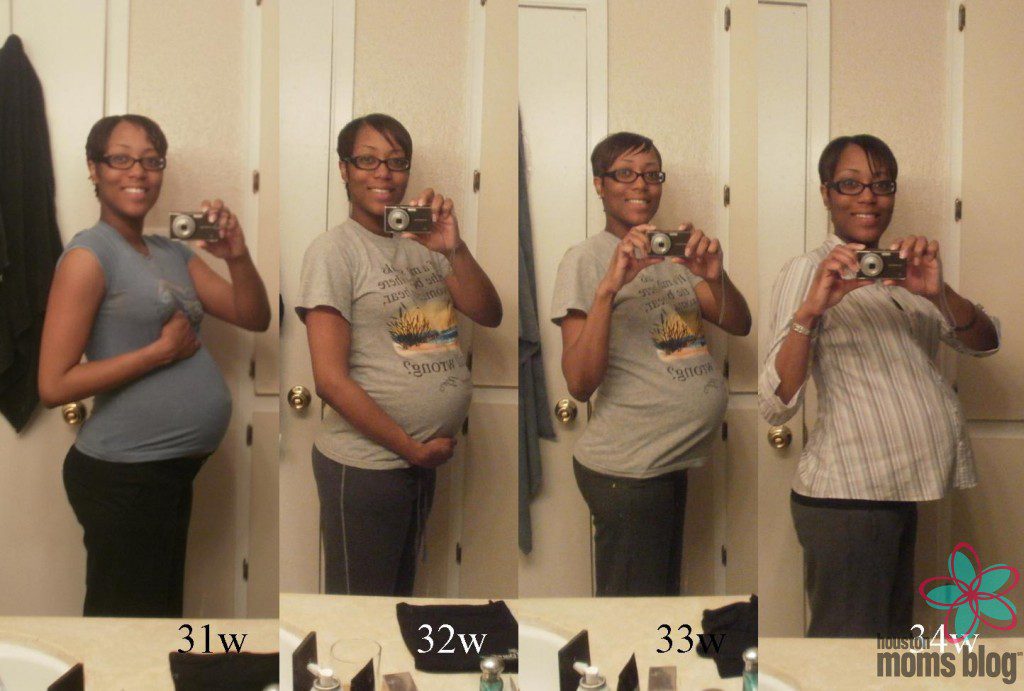 Then I had my kid and the world of TheBump.com and Etsy introduced me to those wonderful little stickers you put on onesies to chart your babies growth. WHAT! I’m all for that except I’m not buying stickers.  Fortunately, I live with a graphic designer who would just Photoshop a month sticker onto my pictures.  Faux craft for the win! 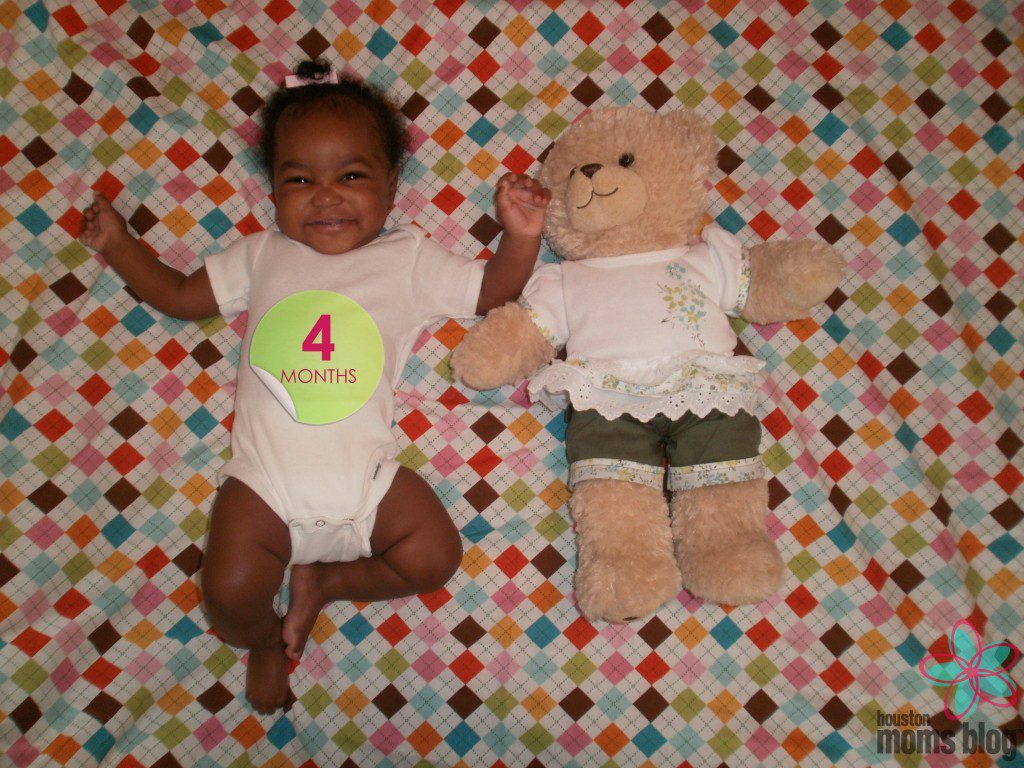 Then I kicked it up a notch after she turned 1. 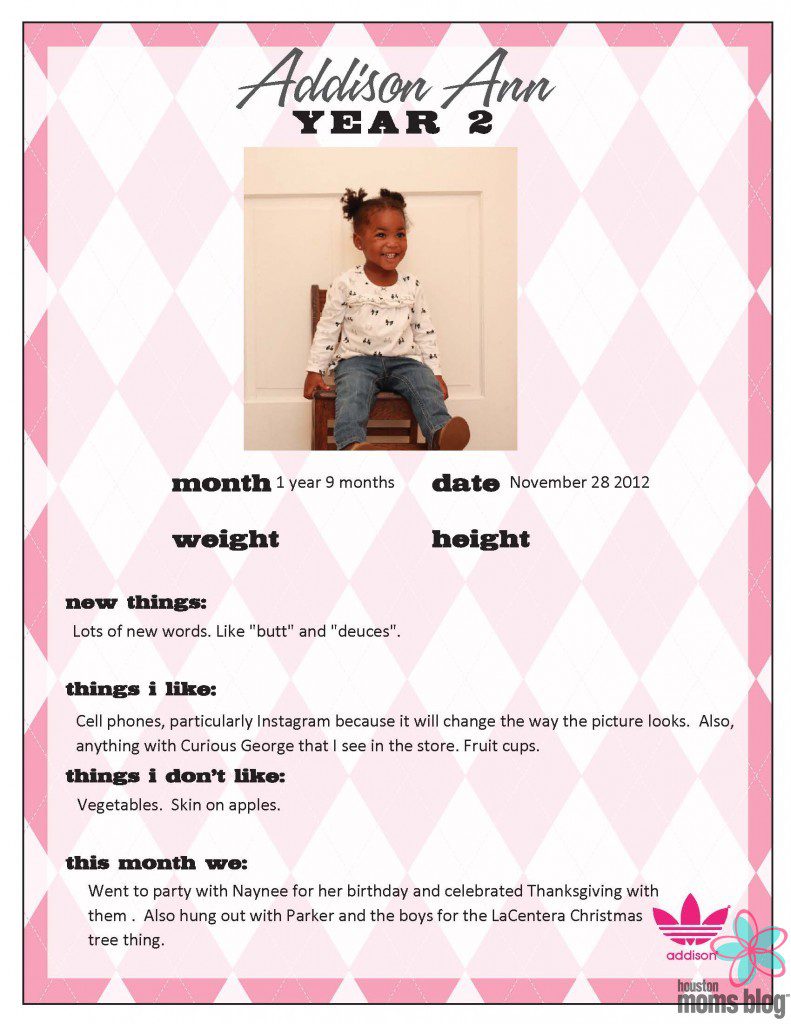 But now we’re approaching the threenager stage.  Everything is on the fine line of cute and too sassy {but funny enough to where I have to turn around and laugh because I don’t want her to know she’s funny and repeat it}.  I can’t be the only one facing this.

So of course, I am choosing to document this. I have decided…

I would like to say this took place in a studio, or at least a clean living room with bright lights and no spaghetti on the floor.  But let’s be for real.  We were at home.  And I asked her a question between her bites of spaghetti and the Disney Jr. breaks.  I didn’t force too much on her at one time because I knew she would tune me out.

It was also good to ask questions that I can ask again a week from now.  Or six months.  Or six years.

I present to you, an interview with Addison.

{Oh, and you must imagine her yelling all the answers because that is her main volume – excited.} 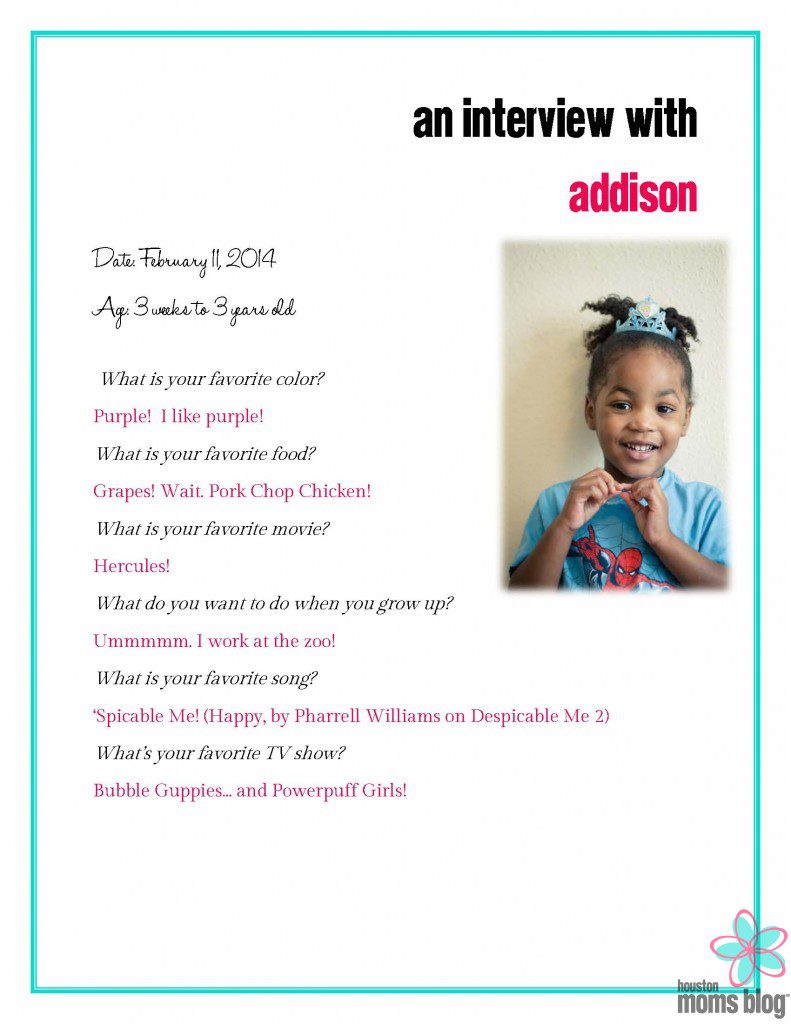 I plan to ask her once a year, around birthday time, just to see how things have changed.  I mean – when I was six years old, I vividly remember wanting to be a farmer.  Yes, I still lived in the city, I have ALWAYS lived in the city.  But farmers got to wear overalls.  And overalls were my favorite thing.  Then, my first grade class went to a farm, and a calf stepped on my foot, and I never wanted to go to a farm again.

You see that picture of Addy? That’s because she asked for a Cinderella/Spiderman party.  This is who she is right now.  At this point in time.  And the changes to come might be miniscule or incredibly dramatic, but I’m happy to know that I captured it some type of way.

If you want to do something like this with your child{ren}, these questions should be something they would be able to answer whenever.  And you’re in luck – because I made a nice printable for you.  I actually made it, I didn’t seek PhotoShop help or anything.

Have you ever interviewed your child?  Any hilarious results?  Is this something you want to do with your kids?  What about yourself or your spouse?  Now I want to use this for everyone.

Summer Survival That Sounds Fancier Than It Is {Plus a Free Printable!}

Growing Up With A Gay Mom