Please Note :: This post may be a fiction piece, but it could very well happen to any of us.  Read at your own discretion… 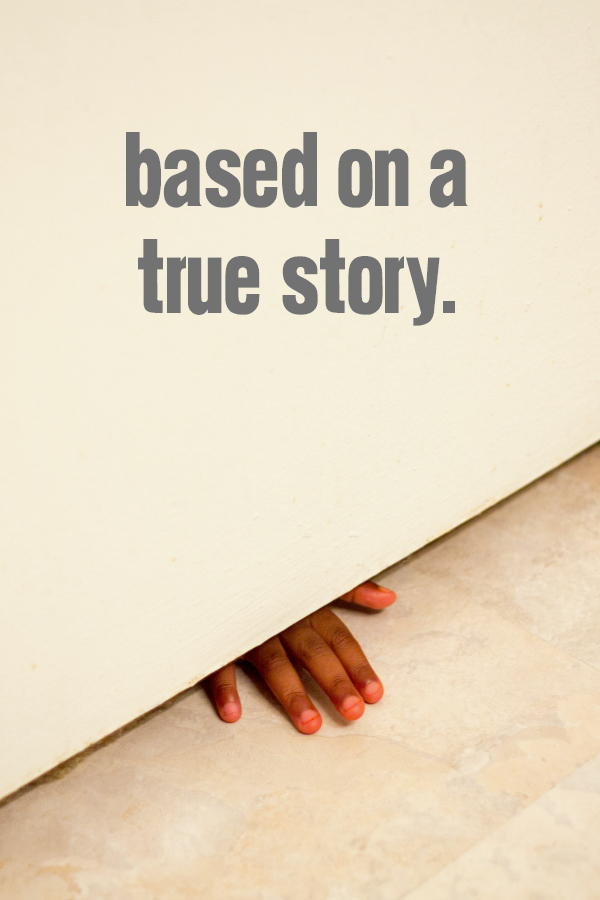 Jane couldn’t believe it had come to this. She heard tale of it but thought it was just a Suburban Legend.  The tables had turned.  And here she was at the lowest point she had been…since that Walk of Shame sophomore year.

She was hiding from her family in the bathroom.

That wasn’t the plan.  This morning she had plans.  Good plans.  Simple plans.  Getting up.  Getting dressed.  A quick stop by the cleaners, and to Starbucks, and the grocery store because today was the day she was really going to make a Pinterest recipe.  Any of them.  There was no reasonable explanation for having six different recipes for corn chowder pinned for over a year and never make any of them.

But the baby was cranky when he woke up.  And Disney Jr. changed the lineup yet again so the threenager had complaints.  And Keith couldn’t find the top to his lunch container.  He refused to throw it away and just use a new one.  Even though she purposely bought the throw away kind after The Great Unreturned Casserole Dish from Block Party 2013 Saga.

So no Starbucks, AGAIN.  What’s another day without little mini scones with the vanilla bean icing on them?  It had already been so long.  So, so long.  She needed to lose baby weight anyway.  {It still counts as baby weight when the kid is 9 months old, right?}  That’s what she told herself as she opted for yoga pants despite not having seen the inside of a yoga studio since the first child was a baby.

But things happen and you go on about your day.  Present Jane thanked her lucky stars Past Jane picked the slightly more pricey, infinitely more convenient drive-thru cleaners.  A traffic jam pushed back her time schedule even further and what planned to be a lengthy grocery trip pre-naptime ended up being a dash in and out and so…no Pinterest meals today.  They’d eat what she served them.

As soon as they got in the house, the baby actually fell asleep and Jane was thankful she was able to open her impulse buy.  That bag of bite-sized Snickers from the cash register.  How did she not even know these were a thing?!  Why didn’t Nickelodeon have a show dedicated to tiny Snickers people living in Snickerville?!  She’d watch that show all day long.

But then the baby woke up and she stashed the food in her housecoat pocket and went about the afternoon.  Singing Yo Gabba Gabba.  Singing Barney.  Cleaning poop.  Smelling phantom poop hours after the initial poop was gone.  Picking up Teddy from school.  Cleaning up after Teddy.  Telling Teddy that he couldn’t have chips before dinner.  Remembering that she was supposed to cook dinner.  More phantom poop smells.  Keith coming home.  The TV on.  The iPad on.  The phone ringing.

Then she remembered the mini Snickers.

“Keith,” she mumbled holding her stomach.  “I need you to get dinner ready.”

She grabbed her stomach and mumbled the word “cramps” which she knew would instantly send Keith in the other direction.

She creeped past the boys and turned the knob so they wouldn’t hear the barely audible door click that would send them sprinting in her direction.

Then she heard it.  The silence.  Sweet sweet silence.

Jane put her back on the toilet bowl and finally had a moment to breathe.  Until she remembered she lived with three boys.  Popping her head up, she wish she had brought in a magazine.  Or her phone.  But she reached for a nail file and took care of ragged edges.  In her solace, she took a look around and realized that someone really needed to clean up the bathroom.  She needed a wife.

Before she could pick up a rag and go to work, she remembered the real reason she came into the bathroom.  The candy.  Gingerly plucking the bag from her pocket, Jane sniffed in the chocolate.  Yummy chocolate.  Filled with peanuts.  Since the school put the peanut ban, she avoided them all together.  Nobody wanted to be the jerk that got Jimmy sick.

She heard the boys ask Keith where she was.  They must have smelled the chocolate.  Or sensed her joy.  How long had she been hiding?  An audible cough would give her away, but also be loud enough to quiet the crumple of the bag.  Why haven’t they invented a noise proof bag?!  This is the future.  She went for it and dug two bites out.

Issues.  That’s exactly what she was having.  The inability to eat chocolate in seclusion was a MAJOR issue.  A husband who was still grossed out about menstrual cycles even after two children was an issue.  And even worse, thinking a three year old would let a door stop him.  Issues.

Jane drew her breath.  She saw the light of the hallway start to darken.  He was coming.

She knew what those kids in Jurassic Park felt like when the raptors learned to work the kitchen door handles.

He couldn’t grip the door.  She knew he must have had hands covered in…whatever.  He knocked.  Once.  Twice.  The chocolate was starting to melt in her hand.  Fear was one heck of a conductor.  Pop.  One sweet sweet candy filled her mouth.  It was heavenly.  She let out a moan.

Then, she saw it.  His hand.  Under the door.  Reaching for her.  Th neon orange fingers, the color everyone knew as Nacho Dorito orange, inhibited him from a firm door grip but he was determined to get at her.

Two more candies into her mouth.

Frantic fingers moving from side to side.  Wanting her chocolate.  Reaching for her peace.

Jane went for it.  Opened her mouth and shoved in what she could fit.  Seven, eight mini Snickers.  Who knew?  Who cared?  It was euphoric, and probably diabetic coma inducing.  It was bold.  Energizing.  Ever so necessary.

She quickly tucked the remainder of the bag into her pocket, wiped the chocolate smears from her face, and gave a courtesy flush.  Sending her dirty little secret down the drain.