One of the herpes viruses; this group of viruses includes the herpes simplex viruses, varicella-zoster virus (which causes chickenpox and shingles), and Epstein-Barr virus (which causes infectious mononucleosis, also known as mono). CMV is a common infection that is usually harmless. Once CMV is in a person’s body, it stays there for life. Among every 100 adults in the United States, 50–80 are infected with CMV by the time they are 40 years old.

In my case, it was known as congenital CMV because I was infected with CMV before I was born. My mother contracted CMV while she was pregnant with me, possibly from my older brother who was a toddler at the time. The thing about CMV is that most people who are infected with CMV never know they have it. The symptoms are very similar to the common cold, and so CMV is mistaken for a cold. CMV is spread by close contact with a person who has the virus in his or her saliva, urine, or other bodily fluids. CMV can be transmitted from a pregnant woman to her fetus during pregnancy.

CMV causes serious problems for fetuses in their mothers’ wombs, obviously, and if you’re wondering why you haven’t heard about this disease – sadly, CMV is not widely known about inside or outside of the medical community. Even though it can be a major cause of any developmental issues that may occur with children, a majority of OB/GYNs do not mention it to their expecting patients. Expectant mothers do not know about this common disease, and so they do not know to be especially careful about coming into contact with young children who are more likely to shed traces of the disease. Something as simple as always washing your hands and not touching the saliva of any child could have prevented a child from being born with CMV.

When my mother was about seven months pregnant, she suddenly gained a lot of weight. When she went to see a doctor about it, they realized that I had a lot of fluid in my body, and that was a sign that something was wrong. They drained the fluid through amniocentriosis, and they did some testing to see what was wrong. They came back with CMV.

Blindness, deafness, cerebral palsy, mental retardation – those were all things that could happen to me, my parents were told. There was a strong possibility that I would not live very long. How terrifying it must be to hear that your child could die shortly after birth; or if I lived, they could have a daughter on their hands with several severe handicaps. I’ll never know just how tough it was for my parents to go through that experience, and I hope I never do.

However, there was a silver lining, small though it may be. My parents lived in Houston, which is famous for its medical center, and at Texas Children’s Hospital there was a doctor in charge of a medical study on CMV. She had been testing the effects of a drug called ganciclovir on people born with CMV but had little luck with it so far. Because my parents knew that I was infected with CMV and that I would have problems after my birth, they were able to plan to have my delivery at St. Luke’s Hospital which was attached to Texas Children’s Hospital. Being there at birth, I might have a fighting chance. 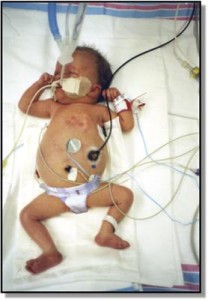 I was born a month premature on March 11, 1990. I spent the next ten weeks in the hospital. I was the first infant in Houston to receive ganciclovir. The drug stopped the virus in its tracks. My life could have been so different. I could have had all sorts of mental and physical disabilities, like so many other babies born with CMV. Instead, I was left with only profound deafness as a mark of what I, and my parents and brother, went through.

It is strange when I think of CMV, perhaps because I do not think of it often. It may sound strange, but to me, I don’t think of CMV as something that affects my life on a daily basis like my deafness does. But I would be wrong to say that the fact that I have CMV doesn’t matter. It does matter, if only because it affected me so little.

When I come face to face with other people who suffered more handicaps than I did because of CMV, I am reminded afresh of how lucky I really am. How lucky I am that I am only deaf, that I have wonderful parents, and that I have been able to live the life that I have had. I am lucky that my parents had enough money to pay for my hearing aids and my cochlear implant surgery at the age of 14. I am lucky that my mother fought to give me the life that I lived.

When I was three, I started reading. When I was five, I started public school. I knew sign language in addition to being able to talk, but I quickly dropped sign language as a means of communication once I started kindergarten. None of my classmates knew sign language, so there didn’t really seem to be a point to using it. Technically, I was part of the special education program, but I didn’t do anything other than go to speech therapy. I stayed in the public school system all the way up through high school graduation, and then continued on to college, where I eventually graduated with a Bachelor’s degree. 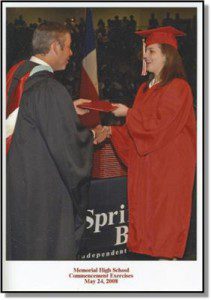 In the fall of 2008, my mother was invited to speak at a CMV conference at the CDC in Atlanta. I wasn’t planning on going, but I did, so I could support her, and to see how CMV had affected other people.

It was quite a shock, seeing all of these people with kids who had been born with CMV and suffered disabilities as a result. I hadn’t realized that I was one of the exceptions to the devastating effects of CMV. In the 18 years since my birth, babies were still being born with CMV. The mothers of those babies still had no idea what CMV was. Ganciclovir wasn’t even in the medical textbooks as a treatment for CMV; it was just added two years ago in 2012.

That same medical study on CMV that was at Texas Children’s Hospital? I was in it, for 18 years. Every summer, I would have to spend a day undergoing tests. I hated it. I would have rather spent the day at home or someplace else. I think my mother probably bribed me to go. I didn’t realize until a few years ago how awesome it is that I was a part of the study.

Because of that study and the tireless hard work of Dr. Gail Demmler-Harrison and her nurses, we have a lot more information about CMV than we did 24 years ago when I was born. Twenty-four years later, I am a college graduate, employed full-time, and live a wonderfully full and independent life. The key to preventing CMV is awareness, and that is why I am sharing my story.

In honor of National Congenital Cytomegalovirus Awareness Month, we are dedicated to spreading awareness and doing our part to Stop CMV.  To read more real life stories of how CMV is affecting moms across Houston, please click here.  Then, we urge you to share this series and help us to spread the word about this preventable disease too!

Caroline is a 24 year old GIS Mapping Specialist who lives in Houston, TX.