There’s an adage I grew up hearing, one that stated March comes in like a lion, and goes out like a lamb. The month holds a beginning of negativity, filled with blustery weather and storms. If the saying holds true, though, there will be a calmness to look forward to by the end.

The year 2016, however, came in like a hurricane, started taking steroids, and then brought in a few drunken friends who set everything on fire. Every time I looked for the silver lining, every time I thought, “Nothing else can go wrong,” the year laughed in my face, picked up a me-shaped voodoo doll, and stabbed another pin into me.

On January 2, 2016, my maternal grandfather passed away from cancer that was only caught after reaching Stage Four. Eight months later, after looking at me during the funeral and whispering, “What am I supposed to do now?” my grandmother left to be with him. Later that January, my younger sister sank into a depression so deep that I thought my family would lose her. There were many months in which I would stop everything to drive over to her house and sit with her, hold her, and watch her cry. Her belief in mankind had faltered, and it took most of the year before she regained a semblance of joy.

March, the lion, saw my boyfriend struggling with his company. The solar market space had some big changes that required him to restructure the way he did business. Although he came out the other side stronger, there were many moments that I feared he would sink into a depression, too.

During this time, I realized my son had a strange skin infection. Dermatologist after dermatologist {one of whom gave me a $500 “shut up and go away” cream} ignored my concerns. Everyone told me my son had eczema; I thought I was going insane. Mother’s instinct, however, told me not to believe their diagnoses. The last doctor I saw listened to my hysterical babbles, examined my son, explained that he had Molluscum Contagiosum, and said she would clear it with Beetle Juice. {After that, I couldn’t stop laughing, and spent the better part of the week saying, “Beetlejuice, Beetlejuice, Beetlejuice!”}

Then, throughout the summer, I discovered a series of truths about my ex-husband and the methods in which he “parents” my six-year-old son that will forever be burned into my memory.  I hemorrhaged money that I did not have to acquire a lawyer because my ex-husband doesn’t listen to simple communication and common sense, only to learn that my ex-husband had, overnight, moved into his girlfriend’s house. Which meant my son was now staying in a woman’s house that I don’t know.

It was one thing after another, and it felt overwhelming.

In September, I injured my only working knee, and my brain went in a tailspin of being a older, thirty-something woman who can’t walk. In October, I re-injured my permanently disabled knee, furthering the mental spiral of despair. After spending weeks in bed, crying and recouping, I then caught, in this order: a cold, another cold, a stomach bug, food poisoning, and, finally, the cold from Hell. The last illness took well over a week for recovery.

Oh, yeah. And, at some point, I missed the dog’s flea treatment by three days, and my house caught fleas.

Things slipped my mind. I forgot every important event at my son’s school, and I mentally beat myself up over it. I made promises I forgot to keep, and stretched myself so thin I felt like I was going to snap. Even the household tasks piled up. Over the past year, I allowed dirt into my home. I let the dishes pile up in the sink for weeks — something I had never before allowed. Vacuuming became a monthly task, instead of a biweekly chore. I would walk into my dirty home, look around, sigh, and then crawl into my bed, turn off the lights, and try to forget my problems.

2016 wasn’t hard; it was painful. I kept waiting for it to drop a piano out of the sky to crush me.

During all of this, I berated myself over everything. I wasn’t grading papers on time. I wasn’t paying attention during cases. I would go home and cry in the shower because I couldn’t let my child see how often his mother broke down. I was fighting a form of depression, and smiling through the pain. There were days when I didn’t know how to get out of bed. There were days when, while walking down the hallway, the weight of life felt like it would crush me to the floor.

A few weeks ago, however, I decided I would stop chastising myself over every slight, and learn to give myself a bit of grace. One of the definitions of grace means a temporary exemption. I wasn’t looking to make resolutions for the new year; I was looking for a reprieve from life. Grace would allow me to do that. 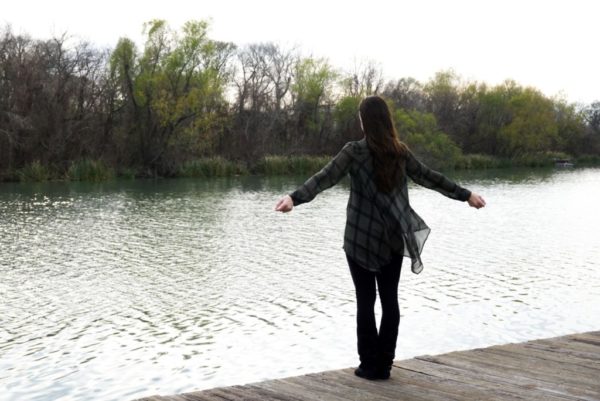 It’s been hard, letting go of things that I want to chew myself out over, but that’s what I’ve planned for 2017.

So what if the dishes pile up? So what if the laundry isn’t folded, and I’ve reset the dryer to fluff for the third day in a row? Who cares if the teachers notice that, underneath my jacket, I’m wearing pajamas. I survived a rough year by the skin of my teeth, but at least I made it through with a smile on my face.

I’ve decided to give myself the grace to see that, and plan to use 2017 to heal.